How Argentina Can Prevent an Economic Crisis: Dollars 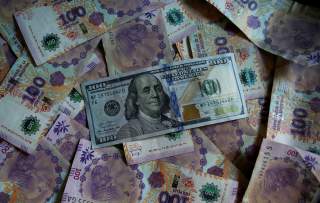 It’s not hurricane season in South America, but yet another currency crisis has slammed into Argentina. It has arrived just as President Mauricio Macri is running for re-election.

Macri, a non-Peronist president, has always expected hard-going. Since Argentina’s return to democracy in the early 1980s, the Peronist party has never permitted a non-Peronist to complete a full term in office. The last regularly-elected, non-Peronist president before Macri was Fernando de la Rúa. The Peronists seized on a sovereign debt crisis (that they helped to create) to force him from power in 2001. That crisis bore similarities to the 2019 reboot.

De la Rúa’s resignation opened the door to fifteen years of leftist-populist Peronist rule, including a dozen years (2003–2015) under Nestor and then his wife, Cristina Kirchner. Their policies of statism, protectionism, expropriations and heavy deficit spending devastated Argentina’s economy, isolated the country and weakened the rule of law.

This latest crisis follows an unfortunate, and all too predictable, pattern. As the Financial Times has reported, “Argentina has defaulted on its sovereign debt eight times since independence in 1816, spectacularly so in 2001 on $100 billion of bonds—at the time the world’s largest default—and most recently in 2014.”

President Mauricio Macri took office in late 2015 and did what he could through executive action to stabilize the economy by imposing austerity measures to reduce the burden of subsidies on the budget. Initially he was successful, making a deal with “hold-out” creditors from the 2001 default, and enticing a new generation of emerging market investors to place what was admittedly still a high-risk bet.

But the Peronists, who still control the Congress, refused to enact Macri’s policy agenda to make the long-term fixes (e.g. labor code reform, reduced regulation, and cuts to public sector pensions and the welfare state) that are needed to stop Argentina from living beyond its means and to make the economy more globally competitive.

The peso has been falling all year, a trend that accelerated after Macri organized a $50 billion standby loan bail-out (with strings attached) from the International Monetary. Argentines saw inflation rising and the same pattern as 2001 re-emerging. They began dumping pesos for dollars.

The peso crash worsened after attacks by currency speculators. At the end of the day, the free market-loving Macri government had little choice but to impose the monetary policy tool they most loathe: capital controls to staunch the outflow of U.S. dollars that posed a serious threat to central bank reserves.

The slight rebound of the peso and the bond market for Argentina’s debt is a reaction to the announcement of capital controls, according to Jeffrey Lewis of the Wall Street Journal. But those controls are no long-term solution.

As Mary O’Grady has noted in an op-ed published by the Wall Street Journal, it doesn’t have to be this way. To help stop the vicious boom-and-bust cycle, she (and other financial experts) proposes that the country to dollarize and eventually sideline its central bank. Other reforms would be needed, too.

It was dollarization in 2000 that saved Ecuador during the Rafael Correa years (2007–2017) from experiencing the devastating economic damage that Correa’s role model, Hugo Chávez, inflicted upon Venezuela. Dollarization has also benefited other Latin American countries, including El Salvador, Panama and The Bahamas.

In Ecuador’s case, the government was just following the lead of the people, who had abandoned the constantly depreciating “sucre” in favor of storing their hard-earned wealth in an instrument (the dollar) they trusted more.

The dollarization process in Ecuador involved the government injecting enough dollars into the economy to support commercial transactions while gradually replacing its old currency with dollars. Agreements were needed with the U.S. Federal Reserve, other American money center banks and the IMF to regularly replace old and damaged notes with new ones—and to ensure that the Ecuadorian central bank could borrow enough of a reserve of dollars to enable it gradually to replace sucre.

Dollarization removed one potential abuse of governmental power—printing its own money—and this increased financial discipline on the government, which must limit its spending to what it can finance with taxes or by borrowing dollars.

In the case of Argentina, it would largely be the same. The deflation and austerity that initially accompany dollarization would certainly be wrenching in the short term. But more wrenching would be the effect on angry populist politicians, whose hands would be tied and prevented from printing more local currency to give the illusion of progress to their people.

If Cristina Kirchner, an admirer of Chavismo, returns to national office in the elections this fall (as the power-behind-the-throne vice president), and if Macri is unable to dollarize before then, which is likely, Argentina will be forced to relive the past yet again.

If dollarization is to happen, though, a majority of voters would have to decide they have had enough. They would have to re-elect Macri, give his party control of Congress, and give him a mandate to end the tragic and debilitating cycle of defaults and currency crashes once and for all.

James M. Roberts is a twenty-five-year veteran State Department Foreign Service Officer who worked for many years in Latin America. He is presently a research fellow at The Heritage Foundation’s Center for International Trade and Economics.