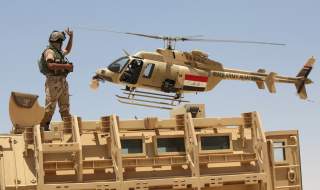 With Mosul and other key cities now liberated from the horrible scourge of ISIS, Iraq stands at a crucial crossroads. Iraqis and Americans have squandered historic opportunities to build a new, stable and prosperous country together before. We must not let that happen again.

The key danger, as before, is this: extremism combined with sectarianism build on each other in a vicious spiral. That dynamic, in the absence of a functional state, further polarizes populations within Iraq and produces and endless cycles of violence, which creates opportunities for foreign meddling and a deepening of the kinds of resentments and paranoias that led to the emergence of ISIS—and even Al Qaeda before that. We must secure military gains with a political victory. Otherwise, we risk the emergence of an ISIS 2.0 among embittered Sunni populations.

Unfortunately, early indications are unpromising. Notably, after three years of atrocious governance by ISIS, and more than a year of intense fighting in which Iraqis teamed with coalition airpower and advisors liberated the city, Mosul continues to lie in ruins.

Iraq will be severely challenged to address this problem alone. With hydrocarbon exports historically accounting for well over half of its export earnings, the sustained decline of global oil prices in recent years would have severely stressed its finances even in a peacetime environment. Indeed, GDP has contracted by about 25 percent over the last half decade. Damages from war since 2003 are measured well into the tens of billions. A population now approaching forty million includes many unemployed and underemployed youth, vulnerable to hateful ideologies. And of course, there is Iraq’s special curse of sectarianism. The country has the potential, at its best, to be the vanguard of cross-ethnosectarian cooperation in the Middle East. But if the country’s leaders do not find a way to appeal to the better angels of their nature, the nation can quickly become a tinderbox, as we all know only too well from recent experience.

Whatever its missteps, and despite the continued controversy over the 2003 invasion, the United States has been extraordinarily generous to Iraq. Its direct costs for military operations have exceeded $1 trillion, with comparable expenditures for Iraq war veterans projected over coming decades. The United States has lost more than five thousand of its own citizens there, with tens of thousands more seriously wounded. It has also provided Iraq several tens of billions of dollars in security, economic and humanitarian aid over the past fifteen years.

Today, mercifully, costs are far less. They are still substantial, however. More than five thousand GIs still support the Iraqi war effort. In recent times, the United States has been averaging several hundred million dollars in economic aid to Iraq, plus at least a billion dollars a year in security assistance. With lawmakers in Washington looking to revive American economic growth, carry out tax reform, and reduce the federal deficit, the temptation will be great to leave Iraq in the rearview mirror yet again.

That would be a major mistake. While U.S. costs should decline somewhat after the defeat of ISIS, it would be wrong to reduce American aid and leverage in Iraq too much. The United States is respected as an honest broker by most Iraqi leaders; it has a unique type of influence that no other outside power, especially those in the region, can rival. If Washington leaders would agree to sustain a long-term military presence in Iraq, focused primarily on the training mission, and sustain aid levels near recent amounts while shifting their composition gradually towards more economic assistance, the United States can help Iraq finally seize the moment to limit regional interferences and build a cohesive civil state. This outcome would be very much in U.S. interests, too, and consistent with President Trump’s promise to put America first by helping to stabilize the strategically vital Middle East.

The central challenge today is to rebuild Iraqi cities recently liberated from ISIS, most of all Mosul in the country’s north, in a way that creates ownership and acceptance across sectarian and political lines. Near-term, winner-take-all elections are less important than a unity government within an all inclusive political process based on the rule of law, justice and equality. The unity government must convey a shared sense of responsibility and fairness among the city’s Shia, Sunni and Kurdish populations, as well as smaller groups like the Yazidis. It must operate effectively in the realms of security, economic rebuilding and recovery, and political decisionmaking. It must be technically competent, of course. But just as importantly, it must be seen as defending the rights and prerogatives of all Iraqis through a roadmap to rid Iraq of sectarianism.

Washington and Baghdad have a golden opportunity, but it is slipping away. The governor of Nineveh province, within which Mosul is situated, has just been dismissed by Prime Minister Abadi. The local government failed to draw up a plan for Mosul which would create an environment facilitating the return of the displaced and kickstart the economy. Rather, it remained mired in financial and administrative corruption, as have most Iraqi provinces.

Prime Minister Abadi, who deserves credit for trying to bring Iraqis together during his three years in office, needs to lead a bold and decisive plan for rebuilding Iraq's second largest urban area. He should appoint a steering group to govern the city that consists of national and regional leaders of high repute, with a range of political identities and technical skills reflective of Mosul’s vibrant constituencies. They should be commissioned with overseeing the return of the displaced, the provision of services, and ultimately the fostering of a suitable environment for elections. Investment and insurance laws should also be enacted to provide a foundation for economic growth. Once they do so, Washington should commit to help fund, on a matching basis, many of the reconstruction costs that will be incurred as Iraqis seek to rebuild the historic city of Mosul and return the country as a whole on a path towards something like normalcy. Less important than the actual amount is a sense of steady and dependable help over the many years—perhaps a decade—that will be needed for this great task.

The costs of building the new Iraq will be substantial. But compared to what America has already expended in lives and treasure, and relative to the stakes involved, those costs will be quite modest.

Sara Allawi is daughter of Vice President Ayad Allawi and based in Baghdad, where she leads the youth movement in the Iraqi National Party, a cross-sectarian group, and works as his Executive Officer. Michael O’Hanlon is a senior fellow at the Brookings Institution.