How the Battle Over Energy Will Reshape Eurasia Relationships 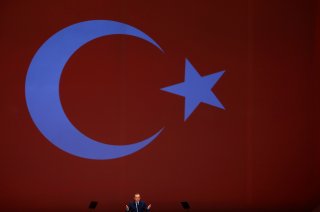 One of the key driving forces behind Turkey’s Libya policy is its desire to redraw the maritime boundaries in the eastern Mediterranean established by Greece’s bilateral agreements with Egypt and the Republic of Cyprus. To that end, Turkey signed a deal in late November 2019 with Libya’s UN-backed government of Prime Minister Fayez al-Sarraj demarcating the two sides’ Mediterranean territory. To support Sarraj, Ankara’s sole ally in the eastern Mediterranean—aside from the Turkish Republic of Northern Cyprus, which only Turkey recognizes—Turkey sent troops to aid in the fight against Khalifa Hifter of the self-styled Libyan National Army. Turkish president Recep Tayyip Erdogan hopes Ankara’s military involvement in the North African country will change the status quo in the eastern Mediterranean, but instead of sending troops to Libya, Turkey should be sending its diplomats to littoral states such as Egypt, Israel and Lebanon.

A Dispute Over Definitions

Since the discovery of sizeable gas reserves in the eastern Mediterranean in 2009, coastal states have been mired in a dispute over maritime borders. At the heart of the dispute is the lack of an agreed definition of their respective Exclusive Economic Zones (EEZ), maritime areas within which states claim exclusive rights to exploit natural resources, like gas.

According to Greece, the UN Convention on the Law of the Sea (UNCLOS) allows Athens to draw its maritime borders starting from its islands. Turkey is not a signatory to UNCLOS, however, and instead argues that every country’s EEZ starts from its mainland, not its islands. Exacerbating the conflict over maritime boundaries is the Cyprus question. The island has been divided between the Greek Cypriot south and Turkish north since a Greek coup d’état and subsequent Turkish military intervention in 1974. Greece and Turkey have been locked in a conflict over Cyprus ever since and efforts to resolve the issue have repeatedly failed. As a result, coastal states have long resisted efforts to determine the precise boundaries of their EEZs, but the discovery of gas reserves changed that. Greece signed several bilateral agreements, which defined maximal boundaries for Greece and Cyprus, leaving a narrow strip of water to Turkey. The agreement Turkey signed with Libya, by contrast, establishes an 18.6-nautical-mile maritime boundary and EEZs for each country north and south of the boundary. These EEZs overlap with the area Greece considers part of its continental shelf.

Greece has thousands of islands and by giving them, along with Cyprus, a large maritime jurisdiction, Greece’s bilateral agreements would in effect box Turkey in. Turkey has a long coastline and independent experts confirm that it is entitled to a larger maritime zone. UNCLOS allows a country to stretch its territorial waters only twelve nautical miles out to sea, while the EEZ can extend for a total of two-hundred-miles. But there’s a problem: The Mediterranean littoral states are close enough together that these two-hundred-mile zones overlap—a problem that is particularly acute in the case of Turkey, Greece, and Cyprus. That is why EEZs in the Mediterranean should be determined through bilateral agreements between the coastal states. But Turkey’s agreement with Sarraj is unlikely to give Ankara a way of changing the status quo. The obvious problem is that although Sarraj’s government is recognized by the UN, there is ongoing fighting in Libya and the fate of the Tripoli-based government is far from certain.

There’s a Better Way, But It Would Require Diplomacy

A more sensible move would be for Turkey to reach out to other coastal states such as Egypt, Lebanon, and Israel and secure similar agreements with them. Ankara has said that it was ready to do so and that it could offer better terms to these countries than their agreements with Greece do. But Turkey’s relations with all three countries remain problematic. Turkey-Egypt ties have been strained since the 2013 coup toppled the democratically elected government of Mohamed Morsi, a close Erdogan ally, and brought Abdel-Fattah el-Sisi to power. Turkey harshly criticized the coup and called for the ousted Morsi to be freed. In response, Egypt expelled the Turkish ambassador and Turkey announced the downgrading of ties and declared the Egyptian ambassador “persona non grata.” Since then, Turkey has become a sanctuary for exiled members of the Egyptian Muslim Brotherhood. The 2016 failed coup in Turkey put an end to the few efforts to normalize ties, and the prospects for putting relations back on track remain dim. To Erdogan, normalizing ties with Egypt’s military regime would undermine the anti-coup stance he has used to build his one-man rule at home since 2016.

Turkey’s relationship with Lebanon is problematic as well. The two countries exchanged angry statements after Lebanese President Michel Aoun referred to the “state terror practiced by the Ottomans against the Lebanese” during a talk to mark the centennial of the formation of Greater Lebanon. After Turkish criticism of Aoun’s remarks, Lebanon summoned the Turkish ambassador. Tensions grew after the Lebanese government criticized Turkey’s offensive against the Syrian Democratic Forces last year, referring to it in a statement as “an aggression against a brotherly Arab state and the occupation of Syria’s land subjecting its people to killing and displacement.”

There are many problems between Turkey and Israel as well. Relations have remained tense since an Israeli raid killed Turkish activists on a flotilla seeking to deliver aid to Gaza in 2010. Turkey suspended all military agreements with Israel and expelled its ambassador from Ankara after Israel refused to apologize for the incident. Energy considerations played a role in the countries’ reconsideration of bilateral ties. In 2016, Turkey and Israel announced that they had reached an agreement to normalize ties, but the coup attempt in Turkey, the failure of efforts to resolve the Cyprus question, as well as Turkey’s strong reaction to the U.S. decision to move its embassy to Jerusalem prevented normalization. There have been recent positive signs, however. Israel’s decision not to sign a statement by France, Greece, Cyprus, the UAE, and Egypt condemning Turkey’s actions in the eastern Mediterranean raised hopes. A tweet posted by Israel’s official Twitter account praising its diplomatic relations with Turkey further fed the optimism. Turkish analysts saw the moves as a sign of both countries’ willingness to cooperate when it comes to eastern Mediterranean energy.

Turkey’s relations with the other eastern Mediterranean coastal state, Syria, are even more problematic due to former’s support for the Syrian rebels and its military involvement in the country’s war.

For all parties in the eastern Mediterranean the current situation represents a mutually hurting stalemate. The conflict between Turkey and the anti-Turkey bloc is hurting everyone’s energy interests, making an investment in the region costlier for energy companies. Without compromises on all sides, everyone stands to lose. Turkish-Israeli cooperation, for instance, would serve both countries’ interests. After the discovery of gas reserves off the shores of Cyprus in 2019, Israel, Greece, and Cyprus signed an agreement to build a pipeline, known as EastMed, to transport natural gas from the eastern part of the Mediterranean to Europe via Greece, bypassing Turkey. The project, which was not viable to start, is even less so in the current context given the high cost of construction and the slump in energy prices. A pipeline through Turkey is the best option. But an Israeli diplomatic source who did not want to be identified told me that “Erdogan’s aggressive rhetoric against Israel and Turkey’s support for Hamas” remain impediments to normalization efforts.

It is certainly true that political problems between countries often block economic cooperation. Yet it is also true that when politics is at a stalemate, the economy may be the only way out. The eastern Mediterranean has become the scene of a mutually hurting stalemate. The time might be ripe to try something new.