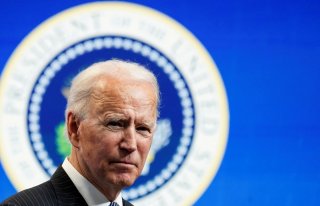 Within his country, President Joe Biden represents the countervailing response to the insurgent, anti-establishment forces unleashed and led by Donald Trump. On the one hand, those forces brought hitherto marginalized problems to the fore. They exposed the opioid epidemic for the national tragedy it has become, requiring national solidarity with the victims and a national strategy to save them. They brought a more frank and open conversation about the tradeoffs of different immigration policies, however strident and painful the discourse became. On the other hand, the Trump approach injected stridency and pain into the discourse and tainted the discussion with the former president’s own flippancy toward the burdens and requirements of democratic governance. This latter tendency culminated in the assault on the Capitol, fueled by President Trump’s inability or unwillingness to accept the results of the election. Without question, January 6 was a stain on this nation that views itself, and is still viewed by many others, as a standard-bearer of democracy.

This unique moment for the United States highlights Biden’s unique virtues as an uniter. A presidential campaign he defined by the nation’s longing for unity should not give way to an administration of vindictiveness and score-settling.

Trump won nearly 75 million votes, more than any candidate in history save Biden himself. Governing the United States without them would be all but impossible. Many of Trump’s supporters have legitimate grievances with coastal elites and globalization policies: an approach to trade that enriched some at the expense of many; an immigration policy that accelerated the decline of America’s industrial base.

Meanwhile, viewed from outside the United States, Trump’s personality may be unique, but his brand of politics is not. Many Western countries—and some non-Western ones too—have experienced a populist surge sharing many of the same characteristics. In some cases, such as Poland, they are parties of the Right. In others, notably Greece, they are offshoots of the Left. Their Middle Eastern equivalents—consider Tunisian Islamist and president of Congress Rached Ghannouchi or Turkish neo-imperialist President Recep Tayyip Erdogan—defy Western rubrics or easy categorization.

Foreign policy failures, above all America’s decades-long entanglements in Iraq and Afghanistan, were crucial to the rise of this populism. Their legacy makes it all the more crucial for Biden to find his footing on foreign policy.

In this area, as in so many others, Trump proved to be a disruptive force. He withdrew from multilateral agreements, openly feuded with allies, and disparaged the role of civil service at home and abroad. Yet for all that, his administration enjoyed certain notable successes that Biden would be wise to build on. Principally, against decades of convention and all expectations, five Arab states have not only signed treaties with Israel but also taken meaningful steps toward sustained people-to-people engagement with the Israeli people, heralding the possibility of genuine, warm peace. This welcome trend, a departure from generations of boycotting and exclusion, owes its launch to the inventive leadership of the United Arab Emirates and its consolidation to the centuries-old Kingdom of Morocco, bound to the Jewish world through ties of blood.

Which brings us to Joe Biden’s foreign policy speech. In a clear, ringing voice, Biden announced that “America is back” and “diplomacy is back,“ and made several commitments. He affirmed that the defense of democracy and human rights are bedrock principles of American foreign policy. He adopted the time-honored view that foreign policy is at its most effective when America’s alliances are at their strongest. He embraced the principle that consistency and reliability are valuable ends in and of themselves. These points are at once banal and heartening. America’s many friends abroad welcome a renewed U.S. commitment to alliances and service as a steadfast guarantor of an international liberal order.

But where American policymakers find conflict between these principles and the major foreign policy decisions of the prior administration, they will also encounter a dilemma. A reflexive reversal of the gamut of Trump precedents risks undermining those very alliances. It would raise precisely the same doubts about American credibility and consistency that Biden’s team so often—and rightly—critiqued about the Trump administration.

And the need for American leadership has never been greater. Covid-19 presents a unique challenge and, as American development of not one but three unique vaccines illustrates, a unique reflection of the country’s tradition as a beacon of hope. Chinese expansionism and authoritarian brutality—ongoing atrocities against the Uighurs come to mind—present an escalating threat.

I hope and trust that the Biden administration will renew and restore the essential role the United States plays for its allies, from Europe to the Middle East to the reaches of Asia. Rarely have a man and a moment been better matched.

Ahmed Charai is a Moroccan publisher and an Atlantic Council Board Director. He is also an international counselor of the Center for Strategic and International Studies and a member of the Advisory Board of The Center for the National Interest in Washington and Board of Trustees in Foreign Policy Research Institute in Philadelphia.