How Biden Got Ukraine and Russia Wrong 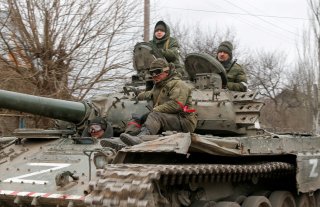 The cries of disbelief from many in the Western foreign policy intelligentsia which met the Russian armored columns pouring into Ukraine were intense if unsurprising. While the latest act in the tragedy of great power politics is certainly devastating, the wailing and gnashing of teeth in Washington and the capitals of Europe would be comical if they were not so pathetic. Some lamented that history appeared to be returning after its hiatus, but in fact, it never left. Those who profess to analyze international affairs, and certainly those who lead nation-states, would do well to dwell in reality vice an aspirational world. Western leaders sleepwalked into this crisis. Their strategy was premised on flawed theoretical assumptions, and its failure carries important implications for U.S. policy going forward.

Illustrative of this flawed worldview, U.S. secretary of state John Kerry famously decried Russia’s 2014 invasion of Crimea by lamenting, “You just don’t in the twenty-first century behave in nineteenth-century fashion by invading another country on completely trumped up pretext.” Even then, although Russia’s methods in Crimea were novel, its territorial adventurism hardly was: it had invaded Georgia in 2008. But Kerry’s cognitive dissonance hits even closer to home: then-Senator Kerry voted for the 2002 Iraq Authorization for the Use of Military Force, endorsing the U.S. invasion of another sovereign state on dubious grounds. Less than two years before the Crimea annexation, Kerry, President Barack Obama, and then-Vice President Joseph Biden relished in ridiculing Republican presidential candidate Mitt Romney and his foreign policy team for presciently identifying Russia as a chief geopolitical adversary of the United States.

Recent presidential administrations’ feckless and effete foreign policy—especially the inexplicable insistence on “resetting” relations with Russia—meets the clinical definition of insanity. The idea that the world has somehow progressed beyond the utility of force in international politics is itself nothing new, but the worldview Kerry and others demonstrate in the wake of Russia’s aggression is underwritten by a widely held international relations theory: neoliberal institutionalism.

The over-reliance on any single parsimonious theory of international relations is myopic and irresponsible for anyone other than pure academics. However, neoliberal institutionalism is especially pernicious to policymakers because it does not recognize that conflict inheres to human nature, underemphasizes power and security as drivers of state behavior, and overemphasizes the role of international organizations and the cooperative prospects of geopolitics. The fact that a nominally-democratic, veto-wielding permanent member of the United Nations Security Council held its rotating presidency at the time of its premeditated invasion of another democracy is farcical and is proof positive that neoliberal institutionalism is an aspirational fantasy rather than a serious worldview.

While realists of all stripes were far less flummoxed at Russia’s overt application of military force, many were nonplussed at the apparent irrationality of Vladimir Putin’s decisionmaking. Anyone who made broad pronouncements on Russia’s intentions based solely on their personal view of what constitutes rationality were equally as naive as those who thought the human race (or at least Europeans) had progressed beyond war. Putin’s bizarre pre-invasion pep talk proclaimed he wanted to “demilitarize and denazify” a democratic state whose president is Jewish.

States and their leaders act to advance what they assess their interests to be, bounded within their respective rubrics of rationality. Their assessments of these interests may be (and often are) quite different from what others may assess them to be. The results can be war, but that does not make them irrational. This lack of strategic empathy—the ability to assess other states’ interests through their rubrics and acknowledge the agency of other actors independent of our own policy, while avoiding the cognitive bias of mirror imaging—is a critical vulnerability of many analysts and policymakers.

Excessive dependence on liberal assumptions has led to a fetishization of diplomacy at the expense of most other elements of national power. Former Secretary of State and Treasury George Shultz identified the flaws of such thinking, noting “Negotiations are a euphemism for capitulation if the shadow of power is not cast across the bargaining table.” Diplomacy without the threat of violence is worthless noise. Western diplomacy in the winter crisis of 2021–2022 was ineffectual precisely because Western leaders mistakenly thought diplomacy alone is capable of solving global problems.

Despite the abject failure of its Diplomacy First strategy, the State Department spokesman had the audacity to assert the United States would continue to solicit Russian cooperation on issues of mutual interest, including Iran nuclear negotiations, climate change, and Arctic issues. This is delusional.

Not to be outdone, Kerry gave a shambolic interview, aired the evening Russian forces poured across Ukraine’s borders. He decried the distraction from climate change and excoriated the emissions effects that a Russo-Ukrainian War would have. Though admittedly the interview was pre-recorded, that a core member of the Obama-Biden foreign policy blob’s attention was not on the consequences of Russia’s territorial revanchism (against a democracy at that, supposedly the foundation of this administration’s foreign policy) is indicative of the globalist dementia that pervades too many in the Washington establishment. Their wrongheaded convictions that the future will be characterized by transnational cooperation around their preferred crises are ignorant at best and treacherous at worst.

To be fair, the administration’s strategy was Diplomacy First but not Diplomacy Alone. Its incipient concept of “Integrated Deterrence” contends that the United States can deter security threats with non-military tools. After Biden unilaterally ruled out the use of force (and practically invited aggression by tacitly admitting a “minor incursion” would be tolerable), the White House’s strategy became largely predicated on the deterrent effect of economic sanctions. In Biden’s first remarks after the invasion, however, he bizarrely claimed that “no one expected the sanctions to prevent anything from happening.” But that is precisely how it was articulated to the American people, to U.S. allies, and to Russia.

It seems the National Security Council staff refused to believe their deterrence strategy was not working as planned, failing to understand that if Putin invaded, the threat of economic pain already figured in his calculus and was, therefore, insufficient to deter him. In a critical empirical test of the administration’s capstone concept of “Integrated Deterrence,” economic sanctions failed to demonstrate deterrent value.

To be clear, the Biden administration made the correct decision by not sending conventional American forces to Ukraine. The United States maintains no formal alliance with Ukraine, and it is ultimately not America’s responsibility to defend the sovereignty of every other state. Importantly, a more competent foreign policy team may have deterred Russian aggression without the actual use of military force. Sadly, the core irony of the neoliberal cabal helming American statecraft is that publicly ruling out the use of American hard power at the outset paradoxically made diplomatic failure a certainty.

We must recognize that international opprobrium alone will not deter adversaries from attempting to use military force to achieve their objectives, but we must balance our commitments so that we do not overextend our limited resources. The United States should assist Ukraine short of direct conventional military confrontation. U.S. covert assistance to the Mujahideen against the Soviets in Afghanistan could be a template. The West’s arms sales in the lead-up to hostilities, especially critical munitions such as anti-tank and surface-to-air guided missiles, were necessary but insufficient. Additional provision of arms must continue even if Ukraine’s conventional defenses deteriorate.

More broadly, the current crisis in Ukraine presents a rare opportunity for the United States to alter some fundamental security arrangements. Washington should first increase its own defense spending to 4 percent of GDP by passing a supplemental defense appropriation. Congress should not wait for the president’s next budget. This may have been unthinkable last week, but it is clear the United States cannot ignore Russia while focusing exclusively on its chief geopolitical competitor in China. America must simultaneously contend with two great powers that present quite different threats.

Other states are altering their security provisions as well. Biden should exploit the burgeoning de-pacification of Germany and Japan to American advantage, urging NATO allies to increase their defense spending and assume greater responsibility for European security. The United States should not wholly abandon its military posture in Europe but should focus the lion’s share of its limited resources in the Indo-Pacific and rebalance its combat power in Europe to frontline states, notably Poland, Latvia, Lithuania, and Estonia. Additionally, sustaining the momentum of the Quadrilateral Security Dialogue and AUKUS while funding the Pacific Deterrence Initiative should be priorities.

Another critical effort is the nuclear negotiations in Vienna with Iran. A similarly flawed diplomatic effort will allow Iran to escalate its proxy wars in the Middle East while pursuing nuclear breakout. If the Biden administration learns anything from its recent failures, it will refuse any deal short of permanent denuclearization. Anything less will further destabilize a region to which America has committed too much blood and treasure and can ill afford to do so again.

The Russo-Ukrainian War will change global security calculations in unforeseeable ways. The Biden administration made critical errors in the preceding crisis, and it is altogether uncertain if the invasion could have been prevented. But what is clear is that diplomacy, untethered from the shadow of hard power, failed.