How Can America Deal with Its Sexual Harassment Problem? 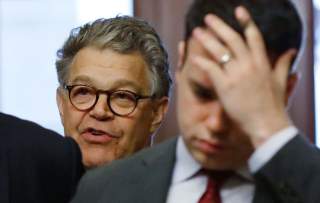 Sexual harassment, in all its forms, is abusive and offensive and should be penalized. However, in all bodies of ethics and criminal codes, we distinguish among various levels of the same offense and tailor the punishment to fit the level of the crime. Catholic theory distinguishes between venial and mortal sins; Jewish teaching requires minding 613 dos and don’ts, though one should only risk one’s life only for three of them. We do not punish people the same for murders; we are much harsher for premeditated murder (first degree) than for involuntary manslaughter. The same goes for the different treatment of those convicted of aggravated versus “common assault.”

Sexual harassment acts also differ significantly from one another and hence call for different levels of punishment. At the worse end of the continuum is use of force, in rape. It should be treated severely like all violent crimes. Lesser uses of force—forceful kissing, groping—nevertheless cross a line that separates sex violence from other forms of sexual harassment. They make people feel violated and disempowered.

On the less severe end of the continuum—still abusive and warranting punishment—are affronts that are strictly verbal. Asking repeatedly for sexual encounters for those who have refused; commenting on another person’s relevant body parts, cat calls and ogling. Each is troubling and can cause a hostile work or social environment. However, while the use of force leaves the victim no choice—verbal communication allows one to respond appropriately—or counter them with a cold shoulder. One can repeat to oneself, “Sticks and stones will break my bones, but words will not hurt me.”

Close to outright coercive behavior is the use of power. Any indication that the offender threatened to deny the victim a promotion, a job, opportunities for stardom or publication—should be treated much more seriously than mere verbal assaults. Some micro-aggression mavens will argue that such a power differential exists in all cross-gender relationships. However, I refer to specific application of power, of the kind listed, not merely that often men have more generalized power than women in our society. Those who cover up, enable or otherwise are directly complicit in deal with sexual violence, should have a much higher level of punishment than they currently face, Church officials for instance.

One may say that elected officials should be held to a higher moral standard than the rest of us because they’re supposed to act as role models. Others point out that many of the most revered public servants—Roosevelt, JFK, Bill Clinton—led rather flawed personal lives. It is not obvious that we can expect people to be both successful politicians and—models of moral appropriateness. None of this is to suggest that the unforgivable laws members of Congress passed to protect themselves from charges of sexual harassment are justified. The three-month window for harassment claims and one month of mandatory counseling must be revoked. Nor should lawmakers be shielded from penalties as they currently are as they use taxpayer funds to pay for hush settlements. However, for most offenses, those penalties should not entail setting aside the choice of the electorate. They should be made to apologize, reduced in rank, be isolated, and fined—but not forced out of office. This is the job of the voters. After all, they could initiate a recall drive if they did not wish to wait until the next election.

To be fair, one must also note that norms change. The fact that “everyone does it” and that men were brought up to assume that they could engage in such abusive behavior with impunity—does not make sexual harassment less offensive. However, it is a mitigating factor that should be used to treat more severely all such acts committed as of 2017. Of course, this refers only to nonviolent acts. To drive the point home: assume next year scores of women who are sex workers come forward to spell out the ways they are exploited, and the new norm will become that all those who sought their services—even decades ago—will be condemned. We would be thrown between the recognition that it was never okay to be a John and—that in punishing people we do take into account the fact that society long sent them signals that such violations were not a big deal and now we are, finally, moving to a better world.

Possibly one can even take a leaf from the book which guides the formation of post-conflict reconciliation commissions, of the kind that took place in Argentina and South Africa. Here most offenders (all but those who committed the more egregious offenses) come and fess up for what they did. And if they show true remorse and commit to restructuring their lives, they are allowed to be reintegrated into society. Sadly, in Al Franken’s case, we got both an elected official pressured to quit—and a very hedged, not quite contrite apology.

Amitai Etzioni is a University Professor at The George Washington University. He is the author of Happiness is the Wrong Metric (Springer, winter 2018).

Image: U.S. Senator Al Franken (D-MN) arrives at the U.S. Senate prior to his resignation over allegatons of sexual misconduct on Capitol Hill in Washington, U.S. December 7, 2017. REUTERS/Aaron P. Bernstein