How China Controls Its Citizens 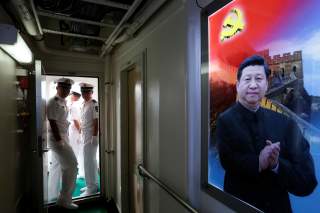 Editor’s note: This is the second article in a three-part series about China’s “Discourse Power” project.

In the first two parts of this series, I explained the genesis and logic behind China’s discursive-construction of a truth-ambivalent China-wide safe space where the Communist Party would be unassailable and understood as indispensable to the nation. I also explained how the Party created a zombified version of what the West calls “civil society” in order to make the safe space self-perpetuating.

In part three, I now turn to how China is making the purveyors of American soft power into its eager and willing host organisms to expand China’s safe space beyond its own borders. China’s global media acquisitions and operations, efforts to dominate the Chinese diaspora, influencing and manipulating the politics of liberal-democratic nations and expanding influence in international organizations are all indicative of China’s international “discourse power” project.

China, however, lacks the type of direct coercive state power on the world stage that it possesses domestically. It cannot just break into someone’s apartment and arrest them mid-blog in Manhattan, like it can (and does) in China. Still, where the Party is able, it replicates its domestic act of zombifying ostensibly regulatory-type international institutions to carry its message. For instance, soon after China gained sufficient influence in the International Civil Aviation Association (ICAO), it began turning that heretofore purely-regulatory body into a host-organism for its discursive project against Taiwan. To one degree or another, it has also turned the International Olympic Committee, the World Health Organization, and the East Asia Youth Game Committee among others into its discourse-constructing hosts. For the party-state, these international acts of “discourse power” are political, consciously-discursive, coordinated, and mimic the party-state’s domestic approach. Also similar to its domestic practice are its well known efforts to intimidate foreign countries and universities into not providing an expressive platform to the Dalai Lama. While we can expect this type of direct pressure to increase as China gains increasing global influence, China will never be able to directly control discourse externally as effectively as it does internally. For that, it has sought out and found eager hosts among the most important conveyors of American soft power. Americans have been rightfully proud that U.S. soft power has contributed to the universalization of liberal-democratic values. Now this same soft power is becoming the party-state’s host organism and enabler to de-universalize the norm of free expression itself as well as weaken other liberal-democratic norms.

Hollywood’s pandering to China is understandable and has been extensively reported upon in the United States. If it were just crass product-placement or toning down the profanity for more tame Chinese audiences, it would be one thing, but this most visible purveyor of American soft power openly collaborates with the party-state to make liberal democracies, if not a safe space, at least a little safer for the party-state itself. In fact, the party-state’s Administration of Press, Publication, Radio, Film, and Television (SAPPRFT) has told Hollywood to edit and delete scenes in blockbusters, including Mission: Impossible III, to portray China more favorably, and Hollywood has eagerly complied.

Remember Red Dawn, The Hunt for Red October, Firefox, Rocky IV and other anti-Soviet films? American movies have always— although never perfectly—been an important avenue of free expression. Where are the recent mainstream movies critical of China’s human-rights abuses? China is holding large numbers of Muslim minorities in concentration camps in Xinjiang right now, right now, but you will never see a Hollywood blockbuster referencing it. Since Hollywood began to notice the emerging (and huge) Chinese market in the early 2000s, there has not been a sliver of criticism. The party-state strictly controls what movies enter the Chinese market. Hollywood knows this is in part to change the movies that Americans watch with the hope of catching a second market in China.

If you doubt this, queue up the sequel (2016) to the epic Independence Day (1996). The same government that mowed down civilians on the streets of Beijing in 1989, actions which the PRC continues to affirm were right, and is holding Muslims in concentration camps today, is favorably portrayed offering its army to heroically engage in the common human fight in the most undeveloped-character cameo possible.

Not long ago, China’s major entertainment group Wanda which has extensive ties to the Party purchased the major American movie theater chain AMC. A prescient Politico article asked, “Would a war movie called South China Sea ever play in one of Wanda’s theaters?” I would answer, “Probably not, but the more disquieting problem is that Hollywood would not dare make such a movie to begin with.”

America’s tech companies, another important conveyor of American soft power, are probably among the most enthusiastic partners with the party-state. Apple, the progeny of the best traditions of California free expression culture, recently complied with the party-state’s request to remove VPNs from the Chinese app store that were allowing Chinese subjects a window through the Great Firewall of China. Colluding with a Communist Party to weaken the norms of free expression has to cross a line somewhere, even for a corporation that has already set the bar so low by outsourcing to factories in China with horrendous labor practices and relentlessly calculating how to avoid paying taxes to the community that made it rich. The party-state, of course, was rightfully concerned that VPNs allowed its subjects to be exposed to dangerous narratives like Saturday Night Live. NBC Universal accommodated by making a politically-docile version of Saturday Night Live, specially designed for Chinese subjects, which got canceled after less than a month for not being funny—“an insult to the US one,” as one reviewer put it.

Facebook’s breathtaking economic richess were built on free expression. Still, in seemingly endless bouts of self-infantilization, Facebook continues to literally run and grovel to the Party to be let into the safe space mega-market while the Party taunts them that it would “damage the national interests of China” while simultaneously waving fat stacks of advertising cash.

By national interest, the Party means that an un-lobotomized Facebook might give Chinese subjects the opportunity to express counter-narratives. Facebook responds by running faster and groveling harder. According to some reports, Facebook is trying to assure the party-state that it could even develop technology to seamlessly block safe space non-compliant newsfeeds and other content sent from outside of China. In other words, Facebook is willing to work with the party-state to limit the reach of what individual Americans might say or express to individual Chinese friends as well as what news reports from abroad Chinese could read. Google is trying to convince the Party that they too can provide new technological ways of suppressing free expression. Facebook and Google are not just bargaining with Chinese freedom of expression; they are bargaining with the norm of freedom of expression itself. The search results and news feeds that they are bargaining away are often written by citizens of liberal democracies. This author doubts that when the CEOs of Apple and Facebook met with Chairman Xi recently free expression was their main talking point. As China continues to tighten its rules on internet expression, these same CEOs attend party-state conferences where they do not utter a word of open criticism. Critical discourse is exactly how soft power is used to change norms, but now American soft power has become a host for the party-state to de-universalize the norm of free expression.

American higher educational institutions—perhaps the most important purveyors of American soft power and liberal-democratic norms—are often unwitting hosts for Chinese “discourse power.” Highly publicized statements by Sen. Cruz, Sen. Rubio and others have brought the collaboration between U.S. higher education institutions and the party-state’s Confucius Institutes into the news lately. A recent report found that “since 2004, the Chinese government has planted Confucius Institutes that offer Chinese language and culture courses at colleges and universities around the world—including more than one hundred in the United States. These Institutes avoid Chinese political history and human rights abuses, portray Taiwan and Tibet as undisputed territories of China, and educate a generation of American students to know nothing more of China than the regime’s official history.” In other words, higher ed is inviting the Party-State to bring its safe spaces directly to American colleges. One should note that the director of the Confucius Institutes’ parent organization—Hanban—sits on the State Council (at the same meetings with the State Premier). Hanban has crudely and actively worked to marginalize Taiwanese scholars at international conferences that it has provided funding for. Some rich and powerful American Universities, like the University of Chicago and University of Texas, have sufficient autonomy that they have been able to expel the Confucius Institute off their campus, but that was mainly the work of concerned academics, not money-conscious administrators.

“American Universities are addicted to Chinese students,” Matt Schiavenza wrote for The Atlantic in 2015. Large numbers of Chinese government-funded students also have the potential to bring the party-state with them. Party-owned Chinese companies are buying up entire cash-strapped American colleges. It also means that these institutions must be willing to toe the Party line. Any potential restrictions on this cash cow, such as limiting visas for Chinese students, are met with spasms from university administrators. With increasingly large concentrations of students at American Universities, China is seeking to export its surveillance system abroad. It is setting up party cells at American universities. China actively polices Chinese students studying under party-state scholarships, including scholarships offered through Chinese Students and Scholars Associations (CSSAs), and encourages them to report on their fellow Chinese-nationals who fail to support the party line in discussions in American classrooms or openly disagree with party actions on American campuses.