How China Has Capitalized on the Coronavirus 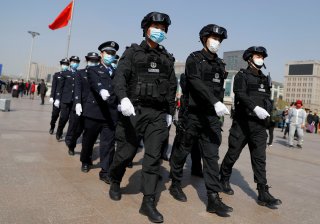 Members of Congress and the intelligence community are now beginning to scrutinize the Chinese government’s alleged efforts to hide the facts about the coronavirus. This process is necessary. Equally important, is the imperative to fix a national security vulnerability that the pandemic has revealed: China’s quiet net of influence over the agencies and international bodies that America has relied upon in the post–World War II era. Here, the Center for Disease Control’s (CDC) early response to the coronavirus is an unfortunate object lesson. Bad assumptions about the good faith of the Chinese government can have devastating consequences.

Back in January 2020, at the earliest phase of America’s coronavirus response, Dr. Nancy Messonnier, the director of the CDC’s National Center for Immunization and Respiratory Diseases, made two astonishing—and faulty—recommendations to the American public.

While recognizing that the CDC’s future guidance could evolve, Messonnier initially advised that “For families sitting around the dinner table tonight, this [coronavirus] is not something that they generally need to worry about.” A week later, she recommended that “We should be clear to compliment the Chinese” for their early recognition and information-sharing about the new virus. On both counts, this advice was far off the mark—perhaps dangerously so.

At nearly the exact time of Messonnier’s ill-fated recommendations, the Chinese government was engaged in an effort to intentionally mislead the world about the true threat of the contagion—according to reporting on new conclusions by the Department of Homeland Security. As China was hiding the danger of the coronavirus from the outside world, it was simultaneously allowing for unrestricted international air travel out of Wuhan—the epicenter of the outbreak. Tens of thousands of Americans were about to die, and the United States was about to experience the greatest economic calamity since the Great Depression.

Looking back at this period, the CDC’s early coronavirus briefings offer a trove of lessons about what not to do in a crisis. Chief among them: never underestimate the Chinese government’s potential for malign intent, and never hide from the American public the fact that some guidance and information being provided is likely polluted with Chinese disinformation.

Take the possibility for asymptomatic transmission. Early in the outbreak, it was unknown in the United States that seemingly healthy individuals could spread the virus. As of January 17, China was indicating that the disease did not spread without symptoms. Assuming the new virus was like SARS or MERS, and accounting for information releases from China, the CDC naturally stood up screenings only for symptomatic travelers arriving from Wuhan (and Chinese hubs) at three U.S. airports. The virus got through. America’s experience with a deadly pandemic had begun.

While the Chinese government was hiding the facts about the coronavirus, the CDC stressed to Americans: “We really need to wait for our colleagues in China to complete their investigation.” Not once did the CDC identify for the public any reason to be skeptical—or even to think critically—about the validity of the guidance or conclusions that they were disseminating—in part—from China. Neither did the CDC suggest any internal awareness or suspicion that delays in detailed information from China could indicate that a deception was underway. It was.

As late as February 5, the CDC continued to reassure Americans that the “risk to the public is low” from the new virus. Only now, state health officials in Illinois and Washington were—wrongly—echoing this mantra in unison with the CDC. Significantly, the CDC still clung to its “low risk” assessment even after it knew that Washington’s first confirmed case from Wuhan arrived as an asymptomatic traveler who had never visited a wet market and had never encountered anyone in China who was ill. This should have been a moment of pause, and perhaps alarm. But rather than identifying this information as a potential warning sign, shifting their coronavirus risk assessment from “low” to “unknown,” or at least emphasizing for the public that fresh U.S. data could result in conclusions that conflicted with the official Chinese line, the CDC stood firm on its guidance: the risk of the virus to Americans was low. The consequences of this action, taken at the earliest phase of the outbreak in the United States, were far-reaching.

Clearly, connecting the dots is easier in retrospect than in real-time. However, the CDC’s early coronavirus risk assessments and public guidance indicate a different problem: failure to assume or disclose to the public that the Chinese government may be lying—and regularly does so. Here, the World Health Organization (WHO) was even more at fault. In late January, after meeting Chinese President Xi Jinping, WHO Director-General Tedros Adhanom Ghebreyesus lavished praise on the Chinese government for its outbreak response. He inaccurately assured the world that Beijing’s “actions actually helped prevent the spread of coronavirus to other countries.” In reality, the virus was likely out of control by this point. New medical evidence suggests that it may have already been spreading in France as early as December. So why did the WHO go all-in on the Chinese government’s official line and abandon prudent scientific skepticism?

A significant factor here is the quiet net of influence that Beijing has been spreading over international agencies and institutions. These are the multilateral bodies that most Americans don’t know exist, but they affect our lives. Their reach is wide and far—influencing global policy and regulations over everything from pandemic response, agriculture, trade, and intellectual property. However, China knows about them. And Beijing has been keen to take them over. In practice, the Chinese government has learned how to “seed top jobs at international institutions with hand-picked candidates.” By placing its desired people in top positions, China can put its thumb on the scale of global policymaking. That’s bad for everyone.

At the United Nations, where the WHO acts as the directing and coordinating authority for health, Beijing currently heads four of the UN’s fifteen specialized agencies. And the UN is not an isolated example. China’s influence likewise extends across the European Union, where the EU recently pulled a detailed report on Chinese disinformation about the coronavirus—reportedly on the fear of upsetting Beijing. Neither is America immune. In states like Virginia and elsewhere, China continues its spadework—operating dangerous propaganda centers in America’s public universities and schools. These centers remain open with the willing acquiescence of local officials and deans. It must change.

If we are going to better protect Americans from threats like the coronavirus, then we should quickly come to terms with—and counter—China’s malign influence over the international bodies that influence U.S. lives, health, and business interests. The current pandemic has exposed this danger. Now, America must eliminate it.

Peter Doran is the former President and CEO of CEPA, a national security and international affairs think tank.