How China Is Making the Coronavirus an Even Bigger Problem 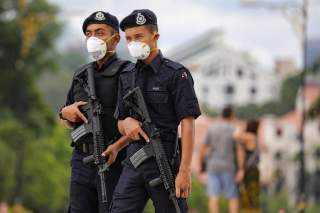 The World Health Organization recently declared the novel coronavirus’s emergence a global health emergency necessitating a worldwide response. Yet one corner of the globe has been denied an opportunity to contribute its own expertise to that effort, and to benefit from the expertise of others. At the People’s Republic of China’s behest, Taiwan remains locked out of the World Health Organization, the International Civil Aviation Organization (ICAO), and other international organizations with a role to play in containing the virus. The global community continues to heed Chinese political demands, increasing the likelihood that the virus will find gaps in the global effort to contain it.

In a particularly concerning development in recent days, the ICAO Twitter account has blocked users, including many policy experts from the think tank and academic communities tweeting about Taiwan’s relationship—or lack thereof—with the organization.

To be sure, ICAO is not responsible for Taiwan’s exclusion; the fault there lies squarely with China and its foreign toadies. But ICAO does have a responsibility to explain whether there is a danger in Taiwan’s Flight Information Region (FIR)—which in 2018 served 1.75 million flights and nearly seventy million passengers—laying outside ICAO’s purview and, if so, how it mitigates that danger. In the midst of a global health crisis in which air travel plays a key role, however, ICAO has eschewed that responsibility.

Whether this effort to shut down dialogue on the issue was directed by ICAO Secretary General Fang Liu, a Chinese national, or was the work of an over-eager social media manager is unclear. But in some ways, it is also beside the point.

Regardless of the process by which ICAO found itself in a blocking spree, the spree points to the danger of China’s growing influence in international organizations. Contrary to statements on the matter from ICAO and the UN secretary-general’s office, the policy experts commenting on Taiwan’s lack of meaningful participation were not “advocates” or “campaigners” spreading “misinformation” or “misrepresenting” ICAO. Rather, they were raising an issue of international concern.

If ICAO’s first priority was the safety of civilian air travel, then it would welcome a conversation about an FIR with the world’s eleventh largest airport by passenger traffic and fifth largest by international airfreight (as of 2018). Instead, it appears more concerned with doing China’s bidding by prioritizing Beijing’s political priorities over a global health emergency.

U.S. policy has long been to support Taiwan’s meaningful participation in international organizations. In September 2019, a bipartisan congressional letter called on Secretary of State Mike Pompeo and Transportation Secretary Elaine Chao to “strongly advocate for Taiwan’s participation as an observer” at the annual ICAO assembly, arguing that “aviation safety must not be a political issue.” Unfortunately, it is precisely a political issue for the People’s Republic of China, which cares far more about isolating Taiwan on the international stage than it does about ensuring the safety of the tens of millions of passengers flying through Taiwan’s FIR every year or about halting the global spread of a deadly virus.

If the United States does truly care about such things, it will have to prioritize them in its dealings with China and China’s client states. This will require explaining to Beijing that, going forward, the Trump administration will consider Taiwan’s exclusion a threat to U.S. national security interests. It will require imposing costs on Beijing for refusing to adopt a more flexible approach to Taiwan’s participation. Additionally, it will require a more aggressive approach, using both carrots and sticks, to sway China’s current allies in international organizations to support Taipei’s practical engagement.

In 2018, Beijing unilaterally announced new civilian air routes over the Taiwan Strait. It did not consult Taipei, which, citing safety concerns, does not approve of their use. ICAO, which requires that flight routes be changed “only after they have been coordinated with all parties concerned,” failed to intervene. There is no world in which this state of affairs can be considered conducive to the safety of international air travel. There is no world in which Taiwan’s prohibition from receiving direct and immediate updates from the World Health Organization and ICAO on efforts to contain the coronavirus can be considered conducive to global health.

China putting its own parochial interests ahead of global concerns is to be expected. That said, it is far past time for the rest of the world to stop putting up with Beijing’s baldly self-serving approach. To say that lives are stake is not an exaggeration. It’s time for a new approach.

Michael Mazza is a visiting fellow at the American Enterprise Institute and a senior non-resident fellow at the Global Taiwan Institute. Rupert Hammond-Chambers is president of the U.S.-Taiwan Business Council.