How China Sees ISIS Is Not How It Sees ‘Terrorism’ 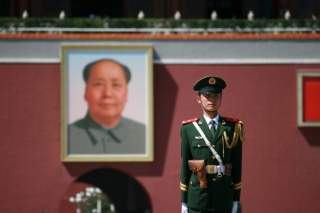 In the wake of the Paris attacks, China is talking up its own struggle with terrorism. Foreign Minister Wang Yi warned against “double standards,” while stressing that “China is also a victim of terrorism.” Chinese President Xi Jinping “strongly condemned” the ISIS execution of a Chinese national, and labeled terrorism “the common enemy of human beings” at the recent APEC summit.

Yet, China employs the terms “terrorism” and “terrorist” in ways that are inconsistent with international norms. Rather these monikers have a distinct ethnic face in China, and are used to justify the Chinese Communist Party’s often heavy-handed policies and discriminatory rule over the far western regions of Tibet and Xinjiang. This far more circumscribed understanding of terror in China actually forestalls international collaboration and sympathy.

While there is no single, agreed definition of terrorism, state actors in the West frequently apply it to acts of violence that provoke terror or fear among the general public in order to advance political, economic or religious causes. China’s recent draft law on counterterrorism, in contrast, contains a far more ambiguous definition, one that includes “thought, speech, or behavior” aimed at “influencing national policy-making,” “subverting state power” or “splitting the state.”

Chinese officials routinely speak about the “three evil forces,” mobilizing the terms terrorism, separatism and religious extremism interchangeable when discussing challenges to their rule in Tibet and Xinjiang. As we have seen repeatedly, the line between peaceful political activism and violent acts of terror is frequently blurred in China, as the sentencing of Uyghur scholar Ilham Tohti and the Tibetan monk Tenzin Delek Rinpoche on charges of terrorism and separatism suggests.

The terrorism tag is rarely employed for politically motivated violence committed by the Han majority or even other minority groups. Take for example the recent spate of suicide bombings in China. In September a series of mail bombs killed ten and injured fifty-one people across seventeen different locations in Liucheng county, Guangxi, while another suicide bomber killed two civilians and injured twenty-four others in Shan county, Shandong, in July. In both cases, local authorities were quick to reassure the public that these were “criminal acts” rather than terrorism.

The first perpetrator was later determined to be a member of the Zhuang minority and the second a troubled Han peasant. In 2013, a wheelchair-bound man set off a homemade explosive device outside the arrivals hall at Beijing Capital International Airport to protest a beating by security officials in the Southern city of Dongguan that left him paralyzed. Many of these cases elicit considerable compassion from the Chinese public.

Yet violence committed by Uyghurs and Tibetans, like the suicide bombings outside a Urumqi train station, the deadly knife attacks on the Kunming train station or even desperate acts of self-immolation by Tibetan monks and laypeople, are roundly condemned and quickly labeled terrorism by both state officials and the general public. Here there is not only a lack of sympathy but even empathy for the root causes of these horrific acts of violence.

The Western media, in contrast, did not hesitate to call Timothy McVeigh and Terry Nicholas terrorists for their role in the 1995 Oklahoma City bombings nor the Aryan nationalist Anders Behring Breivik after his deadly 2011 rampage in Norway. The United States has a long history of combating “domestic terrorism,” with groups like the Ku Klux Klan and the Animal Liberation Front listed alongside Al Qaeda and ISIS as terror organs. All four of the groups listed as “terrorist organizations” by the Ministry of Public Security in China are linked to the Uyghurs.

China does have a problem with religious extremism and is increasingly a target of overseas terrorist groups like ISIS and Al Qaeda. Yet terrorism in China, as both a concept and a rhetorical device, is about securing and legitimizing Chinese rule over the troubled regions of Xinjiang and Tibet. The perceived threat is one of domestic security and political instability rather than any global scourge on humanity as Xi Jinping and other Chinese officials would now have us believe.

James Leibold is a Senior Lecturer in Chinese politics at La Trobe University in Melbourne, Australia and an expert on ethnic policies and relations in the People’s Republic of China.