How China Shot Down Its Own A2/AD Lawfare Strategy 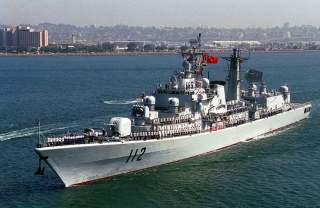 Last month, President Obama made political history by becoming the first U.S. president to visit the Arctic, where he discussed American interests in that region and the need for nations around the world to collectively address the challenges of climate change.  During that same week, another momentous event of a different sort occurred nearby:  five warships from the People’s Republic of China (PRC) transited through U.S. territorial seas off the coast of Alaska, near the Aleutian Islands.  Not all of the details have been confirmed, but this much is clear: these islands are naturally-formed features above water; they are the sovereign territory of the United States; China’s warships transited sovereign U.S. waters near these islands and China did not have U.S. permission or authorization to do so.  Taking these material facts together, this recent development begs the question:  What does transit by China’s warships through U.S. waters mean for the future of international law, particularly as it applies to military activities at sea?

Since its founding, the PRC has evolved in how it views international law and its role in the international system.  For the first three decades of its existence, the PRC demonstrated its skepticism of the existing international legal order.  The first generation of PRC legal experts were known for using phrases such as the pejorative, Marxist-laden “bourgeois international law.”  Gradually, China warmed to interacting with the outside world, culminating with the establishment of diplomatic relations with a number of other nations.  Once the PRC decided to play a more active role in the international system and the legal order underlying that system, a perennial question has been, in the words of Evan Medeiros, “Does China accept the prevailing rules or does it seek to rewrite them?”

During the same era that China was warming to international relations, the nations of the world (including China and the United States) were devoting over a decade to negotiating what would eventually become known as the U.N. Convention on the Law of the Sea (UNCLOS).  This Convention formed a comprehensive legal regime that effectively balanced the interests of coastal states with those of maritime states.  Today, the PRC and the United States are both bound by the legal regime reflected in UNCLOS, whether by treaty or customary law.  China acceded as a party to the Convention in 1996.  The United States has not yet joined the Convention, but considers many of its provisions to reflect customary international law and directs its military forces to operate accordingly.  Officially, the PRC and the United States agree that the international law of the sea, particularly those rules of law reflected in UNCLOS, is a common rule-set that binds their two nations, including their militaries.  Irrefutable evidence of that common view can be found in the Memorandum of Understanding on the Rules of Behavior for Safety of Air and Maritime Encounters, which the U.S. secretary of defense and China’s minister of defense signed in November 2014.  In the preamble of that document, the United States recognizes that China is a party to UNCLOS and China recognizes reciprocally that the United States “supports and observes customary international law as reflected in” that same Convention.

Regrettably, while the PRC joined the Convention that balances coastal state and maritime state interests, it has simultaneously enacted a series of national laws and engaged in other actions that attempt to tip that international balance in favor of China’s interests as a coastal state.  Next year marks two decades of the PRC as a party to UNCLOS, but that also coincides with two-plus decades of China establishing a “full house” of excessive maritime claims – that is, national maritime claims in each of China’s maritime zones that are inconsistent with international law reflected in the Convention.  Taken together, China’s excessive maritime claims seek to restrict the freedom of the seas in the waters of East Asia that are guaranteed under international law to all States, including the United States.  From a military perspective, the national maritime claims asserted by the PRC that pose the greatest threat to the freedom of the seas in East Asia are: (1) its statutory restriction on the right of innocent passage enjoyed by foreign warships through China’s 12-mile territorial sea and (2) its statutory restrictions on the freedom of foreign warships and military aircraft to conduct activities in and over China’s 200-mile exclusive economic zone (EEZ).

Why does China assert this comprehensive system of excessive maritime claims in the oceans along its coast?  In part, it might reflect the legacy of China’s coastal state mentality that is perpetually worried about foreign invasion or colonization; however, it might also be a deliberate, strategic effort to achieve the military objectives of anti-access and area denial (A2/AD).  Consider the words of China’s then-President Jiang Zemin, who told a Beijing audience of lawyers in 1996 that “[o]ur leaders and cadres, especially those of high rank, ought to take note of international law and enhance their skills in applying it...We must be adept at using international law as ‘a weapon’ to defend the interests of our state and maintain national pride.”  Not surprisingly, in the years following that presidential exhortation, China’s military developed the strategic concept of “Legal Warfare.”  That concept includes “legal restraint” (i.e., restraining or limiting an adversary’s ability to maneuver) and identifies the international law of the sea as part of its “armory.”  Thus, just as China’s DF-21 “carrier killer” missile system provides a conventional way to achieve A2/AD, perhaps China’s expansive maritime claims in East Asia sought to effectuate an unconventional way to achieve the same strategic objective.

Yet nontraditional military theories, such as “legal warfare,” do not necessarily survive contact with reality.  In traditional warfare, militaries have developed special counter-measures to defend against an adversary’s use of advanced weapon systems, such as chaff that confuse the guidance system of a missile and antidotes that neutralize the intended effects of biological or chemical weapons. The important point to understand about “legal warfare” is that an opponent does not necessarily need to develop equivalent counter-measures or antidotes.  Why?  Because several inherent characteristics of the rule of law itself can negate the intended effects of “legal warfare.”  These characteristics include the principle of consistency.  Justice, including justice in the international realm, demands the consistent application of particular rules of law -- rather than condoning nations to behave under double standards in their international relations.

This characteristic of juridical consistency has undermined China’s “legal warfare” at sea.  As a rising economic power, China is developing more and more interests around the world.  Protecting those interests requires a greater global presence of China’s navy, which, in turn, necessitates preserving the freedom of the seas.  The United States has long recognized this fundamental truth, dating back to when its independence was declared and its navy was established.  As the recent U.S. Department of Defense’s Asia-Pacific Maritime Security Strategy stated, “The Department of Defense is therefore committed to ensuring free and open maritime access to protect the stable economic order that has served all Asia-Pacific nations so well for so long, and to maintain the ability of U.S. forces to respond as needed.”

Similarly, China’s naval deployments, activities, and transits over the past few years in waters and airspace distant from China seem to indicate that China is arriving at a similar realization – much to the detriment of its “full house” of excessive maritime claims in the waters and airspace of East Asia.

For over a decade and half, China has challenged the legality of U.S. military activities in and over China’s EEZ.  Yet over the past few years, China’s Navy has been conducting military activities in the EEZs of other nations -- including not only the United States, but also the EEZs of Japan, the Philippines, Malaysia, Vietnam and India.  The U.S. Department of Defense reported in 2013 that China’s navy conducted military activities in the U.S. EEZ around Guam and Hawaii.  Then, in the summer of 2014, China deployed four navy vessels to the U.S.-hosted Rim of the Pacific Exercise in Hawaii, along with one vessel that had not been invited – a Chinese vessel to collect military intelligence on the multilateral exercise within the U.S. EEZ around Hawaii.

What was the U.S. response?  Did the United States complain that the China’s intelligence vessel operating in the U.S. EEZ was a violation of international law?  No.  To the contrary, the then-commander of U.S. Pacific Command Admiral Samuel Locklear told reporters at a press briefing, “The good news about this is that it’s a recognition, I think, or an acceptance by the Chinese of what we’ve been saying to them for some time, is that military operations and survey operations in another country’s EEZ, where you have your own national security interest, are within international law and are acceptable.”  In other words, the legal debate between the two militaries on that issue appeared to be coming to a close.

Fast forward to a few weeks ago.  When China’s warships were reported to be passing through the U.S. territorial seas near Alaska, what was the U.S. response?  Spokesmen for the U.S. Department of Defense stated that China had exercised the right of “innocent passage” and transited “in a manner consistent with international law.”  Instead of provoking a hypocritical response from the U.S. government, China witnessed how another nation that has both coastal state interests and maritime state interests attempts to harmonize them effectively -- by applying international law consistently in both the “home” and “away” games, and by respecting the rule of law. Double standards are not a viable option in the international legal order.