How China's Navy Is Preparing to Fight in the 'Far Seas' 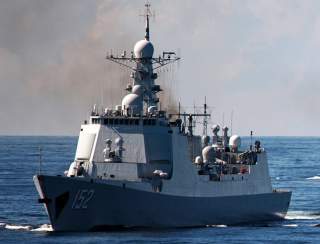 The last layer extending from mainland China—and the primary focus of their paper—is what the two officers call the “zone of concern in the two oceans” (两洋利益关注区). In strategically important parts of the Pacific Ocean and Indian Ocean, the PLA Navy would seek to develop an “asymmetrical balance of power” (非对称的力量均势) or “local superiority” (局部优势) vis-à-vis the adversary. To do this, the service should possess the ability to organize a “Far Seas counterattack” and force the enemy to pay an “exorbitant cost” (得不偿失的代价) for conflict with China. It would conduct operations to “limit and to a certain extent control” the military activities of foreign great powers. Tang and Yang write that in these waters China should combine conventional capabilities with a sea-based nuclear deterrent comprising a new generation of nuclear-powered ballistic-missile submarines.

To be able to fight and conduct naval diplomacy in remote areas, Chinese forces must routinely operate there in peacetime. Tang and Yang acknowledge the foreign angst certain to accompany the navy’s expansion into the “two oceans.” Thus, the authors discuss at length approaches to making China’s strategic transformation more palatable for other states. The PLA Navy must seize on the right opportunities. Here they cite the 2008 decision to begin sending Chinese naval forces to support antipiracy operations in the Gulf of Aden, which opened the door to a regular naval presence in the Indian Ocean. The authors particularly emphasize the value of “sudden incidents” (突发事件) such as the March 2014 disappearance of Malaysia Airlines Flight 370 and the subsequent international search-and-rescue mission in the southern Indian Ocean. This incident provided a useful pretext for increased PLA Navy presence in these waters. Tang and Yang also cite the December 2014 mission to provide fresh water for the Maldives after a water-treatment facility went offline. These kinds of operations can burnish the image of the PLA Navy and compel hostile states to “passively accept the reality” (无可奈何地接受现实) of growing Chinese presence abroad.

What new platforms and capabilities should China build to achieve strategic objectives in the “two oceans”? Tang and Yang highlight three: aircraft carriers, nuclear-powered ballistic-missile submarines (SSBNs) and amphibious assault ships. Aircraft carriers, they write, combine in one platform the ability to command the air, sea, land and information. They represent the “core force for modern war at sea.” As such, China must devote considerable resources to new and better platforms, progressing from midsize carriers to large carriers and from conventional carriers to nuclear-powered carriers. The authors next discuss SSBNs, essential tools for China’s second-strike capability. China needs to build quieter classes with greater survivability. Last, the authors call for more investment in amphibious assault ships. These versatile platforms not only support Near Seas missions, such as island landings; they also serve peacetime functions such as protecting China’s overseas interests. The PLA Navy should build large amphibious assault vessels and equip them with advanced helicopters, including ground-attack variants, and air-cushion landing craft.

Tang and Yang’s 2016 Naval Affairs article is not a formal statement of Chinese naval strategy—and should not be treated as such. It does, however, offer important insights into how PLA Navy strategists are striving to operationalize Xi Jinping’s ambitious new requirements that it to become a “world-class navy” and prepare for “military struggle” at sea. A close reading of their work strongly suggests that China is not building a powerful blue-water navy to conduct joint exercises with foreign navies, or fight piracy, or make friendly port visits, or evacuate Chinese citizens stranded abroad—despite what propagandists like Zhang Junshe may have us believe. Rather, the service is investing in sea power to achieve carefully defined warfighting capabilities in distinct zones extending from the Chinese coast, and that these zones include remote sections of the Pacific and Indian Oceans. Building the Type 055 destroyer is first and foremost a new milestone in this endeavor. Expect many more to come.

Ryan Martinson is an assistant professor at the China Maritime Studies Institute of the U.S. Naval War College. CAPT Katsuya Yamamoto is the Japan Maritime Self-Defense Force (JMSDF) Liaison Officer and International Military Professor at the US Naval War College. The opinions expressed do not reflect the assessments of the U.S. Navy or the JMSDF.