How Chinese Experts Are Preparing for the Next Korean War 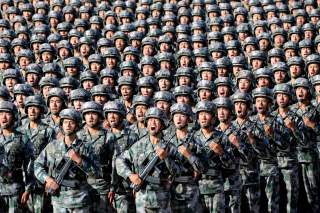 Good news from the Korean Peninsula has been rare in recent times, so the Olympic truce and the possibility of a genuine breakthrough pioneered by Seoul should not be taken lightly. On the contrary, now is the time to pull out all the stops to form up a substantive and stable negotiating process. President Donald Trump’s bold decision, revealed on March 8, to meet with Kim Jong-un before the end of May is an exceedingly positive development, and reflects a statesmanlike gesture that leans toward taking certain risks in order to secure the peace.

This is, after all, the candidate who said he would sit down and eat hamburgers with Kim Jong-un. Sometimes, to the great consternation of the Washington foreign-policy “blob,” common sense evidently prevails. One should avoid excessive optimism, if for no other reason than to forestall grave disillusionment in the case of failure. Yet initial reports on the meetings between senior South Korean envoys and Kim Jong-un (together with his letter to Trump) appear to presage the possibility of a significant opening for negotiations.

Many will credit the Trump administration’s policy of “maximum pressure” for this forward movement. To be sure, that pressure seems to have played a major role. But surely President Moon Jae-in’s skillful diplomacy also deserves ample credit, for turning a bleak situation rather suddenly into one in which a stable and peaceful endgame, at least on the nuclear issue, appears to be more than a farcical reverie.

Perhaps China also deserves some part of the credit? My own investigations on the ground, which took me to the China–North Korea border last December, revealed considerable frustration among Chinese specialists, but also an impressive determination to implement UN sanctions to a high degree. Beijing adopted that stringent policy despite the vocal opposition of many local Chinese interests that suffered financial hardship as a result of sanctions. Nevertheless, China has also not burned all its bridges with North Korea. Making it clear that Beijing would stand behind Pyongyang (at least to some degree) in arms-control negotiations could also have played a role in facilitating the latest warming trend on the peninsula.

Yet even as some welcome hopeful winds blow over the peninsula in the wake of the Pyeongchang Olympics, all parties, including China, will continue to evaluate the prospect of military conflict in case negotiations are a failure and the dark clouds of war return. This edition of Dragon Eye considers some relevant Chinese writings from late 2017, including some that are surprisingly dark and detailed in their consideration of military conflict. Indeed, an early summer fold-out graphic from 2017 displayed a multiaxial Chinese attack against a U.S. THAAD (missile defense base) that employed land-, air-, ship- and submarine-based missiles. But that particular illustration seems rather tame against the one drawn up by Chinese strategists shortly afterwards, and discussed below.

The second illustration from the same naval magazine, Naval and Merchant Ships (舰船知识) purports to divulge in visual form “a military conflict arising from the North Korea nuclear crisis.” Hinting at the invariably sensitive nature of the content, it carries not one, but two disclaimers: that the concepts are derived from open sources (本图根据公开报道) and that the graphic does not reflect the opinions of the editorial team (并不代表本刊). In six vignettes superimposed on a not-very-detailed map of North Korea, the illustration purports to show the unfolding of a military campaign against Pyongyang. Three of these vignettes are hardly surprising. One has U.S. destroyers launching Tomahawk missiles to strike the DPRK’s “command facilities.” Another shows U.S. Marines deploying deep into North Korea ferried by ship-based MV-22 Ospreys. A third, rather striking, image depicts a pair of M-1 tanks cruising down one of the main boulevards in Pyongyang with helicopter gunships flying overhead. The caption notes that a U.S.–South Korean air-land force would drive directly for the North Korean capital in order to secure its “senior leadership structure” and its “nuclear command-and-control structure.”

But much more surprising is the decidedly non-politically-correct nature of the other three vignettes that show Chinese forces intervening in the conflict in various ways. The least surprising depicts a large PLA helicopter hovering over a sprawling camp for refugees with a vast number of humanitarian relief tents, as well as a massive wall, presumably to maintain security. The illustration suggests that such refugee camps would be set up in North Korea close to the Chinese border during the early phase of the conflict. The second graphic is somewhat shocking, depicting Chinese landing forces coming ashore in air-cushioned craft with attack helicopters above them and a PLAN aircraft carrier battle group visible in the distance. The map shows the amphibious invasion site on the Yellow Sea to be just north of Pyongyang and the caption explains that this force can block U.S. and South Korean forces from venturing further north. A final illustration is perhaps most sensitive, as it seems to show a Chinese J-20 fighter shooting down an American F-22. The caption says that the PLAAF will maintain a twenty-four-hour patrol over a declared “no-fly zone [禁飞区]” and will shoot down ROK and U.S. planes after giving a warning.

It would certainly be a mistake to overstate the importance of this graphic; it’s far too colorful, after all. It is emphatically not China’s war plan. However, the drawing may be a unique window into how Chinese security experts view a possible military scenario on the Korean Peninsula. In China’s opaque media and academic environment, the document may have some significance. One more graphical element should be mentioned: a new line—not the thirty-eighth—is drawn east to west across North Korea on this map. The line is north of Pyongyang, but encompasses almost half of the DPRK, effective creating North DPRK and South DPRK. Chinese forces (e.g., tanks and aircraft icons) are seen unmistakably flowing into this area on the map from China along multiple vectors. Although the magazine does not have an article to explain the purpose of this zone, it raises the distinct possibility of a new Chinese protectorate zone that could form either a temporary wartime buffer or turn into a future “statelet” along the pattern of frozen conflicts around the periphery of Russia (e.g., South Ossetia). One cannot rule out that the intended audience for this graphic was the North Koreans—an effort to show that the prospect of war is all too real—and that China has planned accordingly. Indeed, this type of pressure might have helped kick-start negotiations.

But let us not dwell excessively on this graphic, which after all is just a drawing of unknown significance. A more traditional method of understanding Chinese perspectives on the evolving crisis would be to examine the latest writings of Chinese expert scholars. An interesting and rather detailed explanation of Beijing’s “dual-track” solution to the Korean nuclear crisis appeared in the important journal International Relations (国际政治) in the December 2017 issue. The author is Wang Junsheng (王俊生), a researcher at the Chinese Academy of Sciences and an expert whose interesting writings regarding the Peninsula crisis have been a subject of a previous Dragon Eye assessment. His discussion seems highly relevant to the complex negotiations that might be about to start.

Wang’s piece signals that China will continue to pursue sanctions against North Korea quite aggressively, but is also looking for the United States to reform its approach and reduce its hostility toward Pyongyang. He starts from the logical overarching position that “nuclear war does not serve any country’s interests [核战争…不符合任何国家利益].” He notes that Pyongyang’s relentless pursuit of nuclear weapons is partly a response to the weakness of North Korea’s conventional forces and also a response to simulated attacks by both the United States and the ROK against the Pyongyang regime itself. Overall, the peninsula badly needs a new “peace mechanism [和平机制],” but Wang indicates that China has never received a clear response from other countries regarding is proposal for a “dual track [双轨制]” approach. Nor, he observes, has it been rejected.

Wang’s discussion of such a “peace mechanism” within the “dual track” framework suggests that the denuclearization track, on the one hand, is accompanied by efforts to support North Korea on the other track, including both “guaranteeing the survival and security of North Korea, while also reorienting the U.S.–South Korean military alliance [保证朝鲜的生存安全重新定位美韩军事同盟].” For Wang, the nature of the large, annual ROK-U.S. military exercises should perhaps be altered, so that they do not so manifestly cast North Korea as the enemy. Moreover, Wang suggests that to gain Pyongyang’s willingness to join an agreement, “the United States should gradually reduce the forces it bases in South Korea [美国应逐渐减少在韩国的部军数量].”

However, Wang is not only asking Washington to meet Pyongyang halfway, but he also insists that Pyongyang must forswear all its nuclear weapons. If the DPRK does not abandon its nuclear program, Wang maintains that Northeast Asia will remain trapped in a “nonpeaceful situation.” Still, Wang is not naïve, and suggests that it will be very difficult for Pyongyang to give a denuclearization promise at this time. To achieve a breakthrough, Wang presses for the Chinese solution of “double freeze,” which involves a North Korean suspension of nuclear and ballistic missile testing in exchange for the suspension of the ROK-U.S. annual exercise. Probably Wang—like everyone else—would be shocked Kim Jong-un’s apparent reasonableness, as suggested in recent days regarding both a temporary freeze on testing, as well as an acceptance of the annual joint ROK-U.S. exercise. Wang premises the approach on a necessary rule of reciprocity, or “the principle of action for action [行动对行动的原子].” He strongly implies that China is ready to significantly increase economic support for North Korea when he notes that if Pyongyang relinquishes the nuclear program that the “standard of living problem will be fundamentally resolved.” He believes that since Kim Jong-un ascended to the leadership in Pyongyang, that the North Korea people have high expectations for economic development.