How to Colonize Mars 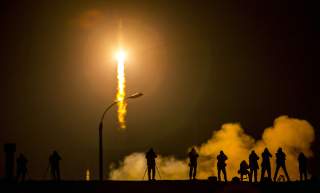 Plans to colonize Mars have made some recent progress. In the realms of science and engineering, Elon Musk published a paper with the ambitious title, “Making Humans a Multi-Planetary Species,” which elaborates on certain technological, but also societal, dimensions of Mars colonization. In another context, Musk mentioned that direct democracy might work as the political system for a Mars colony.

Plans to colonize Mars raise heretofore unasked questions about state formation. Human history is replete with new political systems replacing old ones, whether by revolution or conquest, but examples of explorers in virgin territory introducing new political systems at large scale are nonexistent. Until now, the question was rarely discussed because it was irrelevant. Yet theories about and experiences with direct democracy, especially in Switzerland, may hold innovative and productive potential for a future Mars colony and seem to confirm Musk’s instinct that direct democracy is the right approach for interplanetary explorers to govern themselves.

The challenge of political formation on Mars is the challenge of self-government. For reasons of distance, governing Mars from Earth is impracticable. According to Musk, travel to Mars will take approximately twenty-six months. Under conditions of a two year delay, government by interplanetary coercion becomes impossible. By necessity, if for no other reason, the residents of Mars must govern themselves.

Yet there are other reasons beyond necessity for Martian self-government. Self-government corresponds well to the kinds of people apt to travel to Mars. Musk’s paper contains an interesting thesis: not everyone would want or could afford to go to Mars. Some individuals would likely obtain financing, and others might be employees of a company or a nation-state with the mission and means for interplanetary travel. Naturally the travel involves a huge amount of risk, but as Musk notes, labor and job market conditions on Mars might prove attractive. The population of explorers will include a great many scientists, engineers, and other technical specialists, adventurers, pioneers, and explorers, and probably a handful of the very wealthy and their attendants. First-stage explorers to Mars will likely include those with strong ideological motivations and those with little or nothing to lose on earth. Many of these people will be risk-takers, and some will tend to be innovative initiative-takers.

The new, complicated, and extraordinary challenges on Mars will demand a political system that facilitates a social order as agile and adaptive as the pioneers who are a part of it. Constant learning, exploration, and experimentation will be essential in the face of original technological and social problems. Entrepreneurial and organic political organization in the form of a direct democracy will maximize the potential of pioneers to meet these unique challenges. Direct democracy also has the potential to dilute tensions resulting from the diversity of the colonists and their potentially divergent or conflicting loyalties and interests. Much more so than on earth, the borders between private and public, between economy and state, and between social and political, will disappear. Very few political systems can balance all of these factors. A direct democracy can probably balance them best.

Federalism is another key component of Switzerland’s direct democratic culture. This vertical separation of powers between the federal, state and semi-autonomous sub-state entities is a core element of Swiss direct democracy.

Part-time public service also reinforces Switzerland’s unique direct democratic culture. Many political functions are executed by part-time officials, public servants who also maintain another job even while they hold government office. In fact, Switzerland is famous for adhering to this principle with its militia approach to manning and training its armed forces. The aim is to keep up the connection between the political system, the economy and civil society.

Another primary element of Swiss political culture is a system of obligatory consultations. Government and parliament have to publish draft laws to obtain public comment. Everyone is allowed and welcome to respond, from experts to ordinary citizens. This process reduces uncertainty through its openness and transparency.

All these elements maximize participation in the decisionmaking process and also safeguard reflection and inclusion. Reflection, as it is used here, refers to the necessary delay in the lawmaking process in order for a proposal to “ripen” as the public and the public’s representatives gain an understanding of its impact. Limited delays can lead to more mature decisionmaking. Delays can also help avoid simple majority rule, or worse still, mob rule, or rule by a particular ethnicity, religion, or some other affiliation. Delay allows citizens to carefully weigh and discuss proposals.

Participation also leads to inclusion, which means that all relevant, affected, and interested groups and persons can be involved in the political process. Inclusion guarantees the influence of businesses, civil society, scientific and other experts, and even noncitizens in the sphere of politics and state, and establishes a porous boundary between the respective spheres. The interaction of these different groups and interests within the political process maximizes the legitimacy and public acceptance of political decisions. Involving so many disparate groups and viewpoints also engenders pluralism, creativity, and innovation.

This governance is bottom-up. Law derives its validity from the consent of the governed. Self-government and individual freedoms mutually reinforce each other. These concepts date back at least to the philosophies of Kant. From a more libertarian point of view, the scholars Feld and Kirchgässner argue that techniques and a culture of direct democracy can help protect individual freedoms from state power. Direct democracy’s separation and fragmentation of authority enhances political competition and diffuses power between and among the porous social spheres mentioned earlier. Taken together, these phenomena lead to improved outcomes for and by the self-governed.

Switzerland’s historical-political roots make it a good example of a direct democracy. Of course, classical liberalism and republicanism advanced a culture of direct democracy in Switzerland, geared as these philosophies were to replace ancient systems of divine or monarchical authority with new ideas of popular sovereignty and civil rights. Christian political movements in Switzerland also pushed for direct democracy, contributing an orientation toward decentralization and individual rights.

The history is a bit murkier when it comes to the development of medieval assemblies and their influence on Swiss democracy. Two Swiss cantons still prominently employ public assemblies (“Landsgemeinde”), which generally came out of medieval cooperatives as valley-, market-, village- or alp-cooperatives, monastery self-government, or city republics. (Wholly apart from Switzerland, this form of democracy also developed organically in some African tribal structures, which provide an egalitarian opportunity for every person to speak with decisionmaking by group consent, such as in the Somali “shir” tradition.)

Mars colonization presents more similarities to the political development of Switzerland than some might think. First, Musk hypothesizes that “the threshold for a self-sustaining city on Mars or a civilization would be a million people,” a population size roughly on order with Switzerland’s current population of eight million. While today Switzerland is quite accessible to the outside world, during the medieval period its mountain ranges made Switzerland challenging for foreign powers to conquer or even coerce. But friendly travel was certainly possible and even frequent and necessary as Swiss mountain passes offered the realms of Northern Europe a direct path to Rome and the Pope. These factors favoring independence played a significant role in the culture of self-government and self-determination in Switzerland. Similar factors will likely have a similar impact on Mars, too.

Among pioneering early Mars colonists, it is likely that the relationship between direct democracy and anarchist theories probably increases the odds of adoption. To the extent that utopian social theories influence early Mars explorers, they may be attracted to idea of grassroots structures inherent in direct democracy but which are also features of the anti-globalization movement and New Anarchism. Whatever a utopian chooses to call it, letting people participate and solve conflicts inclusively and peaceably resembles direct democracy. Anarchism and its related models such as “hybrid political order,” “concentric order,” “organic order,” “embedded state,” “fragmented sovereignty,” “unconventional statehood,” “grounded legitimacy,” and others, all derive political legitimacy from bottom-up structures, political inclusion, and direct political participation for constructive and imaginative political and social problem-solving. All of these theories share DNA with direct democracy.