This Is How to Compete With China 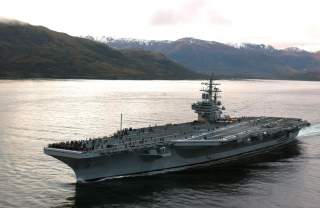 Chinese President Xi Jinping’s visit to Washington this week reminds us that China stands as America’s most serious long-term strategic challenge. Yet the Obama administration’s China policy has been inconsistent and ineffective, at best.

The next commander-in-chief must do better. Under my leadership, the United States would stand by our allies, hold Communist China accountable when it misbehaves, speak clearly for free markets and free peoples and lead with strength and clarity.

Six and a half years into the Obama presidency, Americans rightfully feel enormous angst about the rise of China. Having rocketed to the status of the world's largest economy by purchasing power parity (America remains the largest by absolute size), China is actively challenging the U.S.-led order in Asia; intimidating its neighbors; stealing American intellectual property; waging cyber attacks against U.S. government entities; and creating havoc in world stock indices with its ham-handed financial interventions.

In the face of a rising China, the Obama administration’s “pivot to Asia” was supposed to shift U.S. military resources and economic attention to the region. Yet the strategy has failed to stop China’s provocations while disappointing U.S. allies.

For one, Asia sees very well that the U.S. remains distracted by threats such as ISIS, Russia’s aggression in Ukraine and Iran’s nuclear ambitions. Additionally, President Barack Obama’s fecklessness, most evident in his inability to enforce a red line drawn against Syria’s Bashar al-Assad for the use of chemical weapons, created grave doubts in the region about America’s resolve to counter potential aggression from China.

In Asia itself, the Obama administration has protested loudly against China’s provocations, which include: a large-scale campaign to build artificial islands for potential military use in the disputed waters of the South China Sea; the unilateral declaration of an air defense identification zone encompassing disputed islands in the East China Sea; and the dislodgement of a U.S. ally from a hotly contested shoal in Asia. Obama’s indignations notwithstanding, China remains undeterred.

Unfortunately, the administration’s pattern of helplessness surfaces throughout the bilateral relationship. In the realm of intellectual property, China is responsible for possibly up to 80 percent of America’s total loss, but the administration is still mulling over tough sanctions rather than imposing them. In cyber espionage, the Chinese government hacked from the Office of Personnel Management the sensitive records of some 22 million U.S. federal employees. Yet the Obama administration cannot even bring itself to openly identify China as the culprit.

When it comes to China’s economic modernization, Obama has demonstrated little understanding of its real implications. During his first term, the President spent much time fawning over China’s top-down, state-driven economic policies ranging from massive infrastructure spending to taxpayer funded green technology.

Certainly, China’s default position, on full display when the country’s stock markets plunged this summer and in its subsequent recent yuan devaluation, is massive government intervention. Nonetheless, Xi has pledged to give the market “a decisive role” in the economy in order to promote sustainable economic growth. This determination stems from the same desires that have propelled him to challenge U.S. leadership in Asia: to make China stronger, richer and perhaps one day powerful enough to overtake the U.S. as the global hegemon.

Indeed, Xi understands that China’s influence on the world stage is made possible by more than thirty years of breathtaking economic growth. Obama, on the other hand, appears indifferent to the anemic growth that he has overseen in America, and has either instituted or left untouched high tax burdens, intrusive government regulations (such as Dodd-Frank and Obamacare) and a chronic lack of fiscal discipline—all of which contribute to America’s economic weakness and limit the projection of U.S. power abroad.

Alarmed by Obama’s poor performance and China’s provocations, critics have called for the cancellation or downgrade of Xi’s upcoming state visit. A better approach would be to offer real solutions and implement better policies, such as the ones below.

Maintain a strong military presence in Asia that would serve as a deterrent to Chinese aggression. In that vein, Washington should strengthen or continue to pursue initiatives such as the rotational deployment of U.S. Marines to Australia, the re-establishment a U.S. military presence in the Philippines and support for Japan to undertake a combat role in collective security.

Stand by—and increase military cooperation with—U.S. allies that have been unnerved by China’s provocations. Encourage these countries and others in the region—such as Australia, Japan, South Korea, India, the Philippines and Vietnam—to strengthen security cooperation with each other.

Challenge China’s outlandish territorial claims. This includes sailing or flying by China’s artificial islands in the South China Sea with U.S. military aircraft or vessels to make clear that America does not recognize the islands’ legitimacy under international law.

Impose harsh economic penalties on Chinese firms that steal—and are end users of—American intellectual property. Those found guilty of these practices will face stiff restrictions in, or be denied access altogether to, the U.S. marketplace.

Retaliate against China for conducting persistent, large-scale cyber espionage against the U.S.

U.S. global leadership is derived from—and maintained by--the strength of our resolve and the credibility of our promises and threats. It is also undergirded by the ingenuity of the American people and the dynamism of our market economy. In our strategic competition with China, let’s remember to protect and reinforce that which has made our global leadership possible in the first place.

Ben S. Carson is a Republican candidate for president.