How Conservatives Forged the MAGA Right 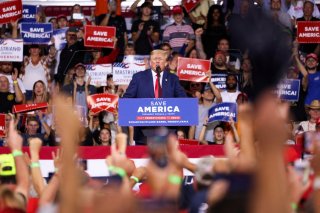 IN 1962, Frank Meyer outlined three elements of the right-wing voting bloc: responsible conservatives, like himself; Barry Goldwater followers, both Republican and Southern Democratic; and those with a “continuing, instinctive opposition to the whole kit and caboodle of the Roosevelt revolution.” This last group provided the shock troops for right-wing movements from “the Liberty League and America First through the Taft campaigns, the McCarthy days, and today.” They were the “hard right,” with “undoubtedly a strong element of know-nothingism in it.” These responsible conservatives had a duty to blunt the “know-nothing” leaders and their votaries in what the ex-communist Meyer called a united front against the “Liberal Establishment.” The problem, as William Rusher, the dour publisher of National Review, pointed out, was that this right-wing mass didn’t look to Meyer and National Review for leadership. They were merely “a delightful ally who can deftly spear the Left.”

In The Right, Matthew Continetti traces the dissolution, reconstitution, ascent, and second dissolution of the twentieth and twenty-first-century American Right as he attempts to make sense of the dilemma Meyer and Rusher described. Continetti promises neither hagiography nor pathology—a history of the Right willing, we are told, to confront its darker recesses as our cicerone locates conservatism within a broader Right, or indeed, Rights. The core dynamic he identifies is an ongoing and shifting alliance between “elites” and “populists.” Continetti is a true believer steeped in the conservative movement’s history. He takes on the conservative search for meaning post-Glasnost and traces Trumpism’s absorption of conservative institutions. But as a self-conscious heir of the conservative movement—he is, among other things, the son-in-law of William Kristol—Continetti cannot bring himself to deliver a necessary reassessment of the Right. Without a clear sense of what the Right is, he ends up offering a callow and unoriginal history of movement conservatism.

Continetti’s framing of the Right as a “war,” more from the subtitle than body of the book, hardly makes sense. A “war” implies bitter conflict between “populists” and “elites,” or some other set of factions. There is very little intra-Right war here. With a handful of exceptions, the exclusions, “readings out,” and struggles over the institutions of power are largely absent. Instead, the history of the American Right, and conservatism’s place within it, is more often a tortuous series of alliances and justifications between nostalgic, aristocratic, or intellectual elites and white middle-American populists, as the author of The Persecution of Sarah Palin well knows. Continetti clearly hopes for a restoration of fusionism. To this end, he might have written a latter-day Buckleyite polemic against the Trumpist, populist Right. It would have been a false history, but a useable one. Instead, too aware of the darker recesses of the Right’s history, Continetti cannot simply whitewash conservatism’s past. Nevertheless, he is too committed to the cause to confront the deep roots of the post-liberal Right in both conservatism and the American Right writ large. As both conservative paladin and as historian, Continetti comes up short.

THE RIGHT starts smartly with Warren Harding and the conservative Republicans’ boasts about returning to normalcy after World War I and Woodrow Wilson’s progressivism. Continetti identifies three planks of Republican Americanism: free-market economics, isolationism, and constitutionalism (the “Ark of the Covenant of American Liberty,” per Harding). Events of the twentieth century delegitimized these foundations. The Depression destroyed faith in the market; World War II (and the Cold War) made isolationism redundant. More insidiously, progressives from Franklin Roosevelt on undercut constitutionalism in a “jujitsu-like rhetorical move,” replacing it with “an ever-present behemoth that regulated American life and dispensed benefits.” Statism has been so potent that “only intermittently in the years since has the electorate found the GOP rebuttal persuasive.”

The fusty Harding exemplified the fundamental ideas of modern conservatism as we know it, alongside a few references to Gilded Age political philosophy and jurisprudence. But it tips readers to Continetti’s view that the Right is a story of “conservatism” and the Republican Party. For example, despite the outsized role the Southern Democrats played in twentieth-century politics—surely a key component of any broader story of the American Right—they only really appear when making common cause with the GOP.

Continetti can be impatient. He races through the prewar American Liberty Leagues, the National Association of Manufacturers, Southern Agrarians, the Black Legion, the Second KKK, University of Chicago economists and humanists, and the anti-Stalinist Partisan Review at a rapid clip. Continetti also has little time for critical analysis, and much of the material is familiar territory. He usefully accounts for the America First isolationist Right, represented at one pole by the statesmanlike Robert Taft and at the other by the flyboy fascist-sympathizer Charles Lindbergh. Isolationism earned the Right a popular voter base, Continetti argues. But to succeed, it would need to match “its nationalist sentiments and appeals with a public that accepted the necessity of overseas engagement.” Anti-communism and the Cold War became, in Continetti’s view, the dynamic unifying force of the postwar Right, bringing each faction together under one banner. His treatment of early postwar conservatism is also familiar. We get Friedrich Hayek, Henry Hazlitt and Human Events, meet William F. Buckley and a bevy of ex-communist luminaries such as Frank Meyer, Whittaker Chambers, James Burnham, and Willmoore Kendall. We visit Russell Kirk in Mecosta, and so on.

Joseph McCarthy figures prominently. Continetti shows Tailgunner Joe perfecting a right-wing populist playbook. McCarthy turned the plebeian Harry Truman into “the protector of a corrupt establishment,” redirected populist rhetoric toward “hidden Communists” and their “liberal Democratic protectors” all the while dismissing procedural norms. Continetti’s McCarthy is awfully Trumpy: he stared down critics, undermined political rivals, and dealt out gendered nicknames. Continetti recognizes how closely many conservative icons—including Buckley, Kendall, and Burnham—supported, even worshipped, him. “McCarthy had enveloped the Right in his elaborate conspiracy theory. He fed off conservative alienation from government, from media, from higher education.” These fantasies could not withstand reality, and McCarthy was censured, over conservative objections, and marginalized—although the book leaves out how National Review published his byline until his death. Continetti contends McCarthy’s main legacy was accelerating the shift of ex-Marxists from Left to Right. He bizarrely misses his earlier point about the threat of demagogues on the Right and the extent to which “respectable” conservatives were willing to alibi McCarthy, while moderate Republicans like Dwight D. Eisenhower and “New Conservatives” repudiated him. Continetti traces the conservative search for coherence and respectability. His argument closely echoes Jonathan M. Schoenwald’s Time for Choosing—that the so-called “respectable Right” had to discipline out the “irresponsible Right.” Continetti hits familiar beats: the Sharon Statement, Draft Goldwater, Phyllis Schlafly, the problem of the John Birch Society, Gen. Edwin M. Walker, the Buckley Mayoral Campaign, and “Teflon” Ronald Reagan. The problem was this: “Conservatism could attain neither elite validation nor nationwide success if it was associated with Birchism”—a reference to the paranoid John Birch Society. “But it also could not sustain itself if Birchism was excised – it would have no constituency.” Continetti argues the responsible Right’s belated disciplining of the movement prevailed.

By the end of the 1960s, Continetti presents conservatism as a more-or-less developed ideology increasingly brought to public attention by the consciousness-raising electoral campaigns of Goldwater and Buckley. Conservatism was poised to capitalize on the breakdown of the New Deal coalition on the shoals of race, Vietnam, and liberal permissiveness, only to be gazumped by Richard Nixon—a right-winger unaligned with the conservative movement riding a wave of “street corner conservatism.” Other right-wingers—not just Nixon, but also Alabama’s George Wallace and the emergent “New Right”—demonstrate that the American Right was and is more than movement conservatism. Indeed, “the challenge that Wallace posed to the Right was unequivocal,” Continetti writes. Buckley needed to “keep George Wallace from swallowing American conservatism whole.” He excoriated him on television, but, Continetti notes, downplayed the “issues that animated” Wallace’s supporters. Likewise, Barry Goldwater praised Wallace’s “straight talk, appeal to patriotism, law and order, antagonism toward liberal intellectuals, talent for public speaking,” and flair for the dramatic in National Review, only cautioning right-wingers not to waste their votes by picking a losing candidate. Wallace was fueled by “the politics of racial polarization,” Continetti writes euphemistically. But we should note that like Huey Long, Southern Democrats, and to some extent Nixon, Wallace shows how easily the American Right endorses authoritarian and welfarist—if racially loaded—policies. Likewise, the Right is more often motivated by racial and cultural animus than dogmatic policy. Barry Goldwater barely won his home state in 1964, but won six formerly solid Deep South states. Are we to think they were overnight small government purists?

ENAMORED WITH the esoterica of movement conservatism, Continetti struggles to grapple with the broader Right—and misunderstands conservatism’s relationship with it. The core problem is definitional. Precisely what Continetti means by “the Right” is unclear. Is it a structural defense of social or economic privileges? An ideological defense of hierarchy? Early on, Continetti mentions preserving the status quo, by which he means “free enterprise, foreign policy restraint, US patriotism, and non-sectarian (though Protestant-tinged) civil religion,” and opposing the bureaucratic state. Elsewhere he calls conservatism a defense of “Classical Liberalism.” But even as definitions of conservatism, these don’t exhaust the variety of conservatism, let alone a broader Right. Other than “US patriotism” and “civil religion,” there’s not much here about culture—the gender, racial, moral, and symbolic issues that now and often have been the front line of Left-Right conflict in America. By default, the Right becomes whatever opposes the Left, bound together in battle against overreaching liberals. This decision means otherwise unrelated actors come under the same banner, and Continetti shifts the historical initiative to the Left, which itself remains nebulous and monolithic.