How Coronavirus May Reshape the World Order 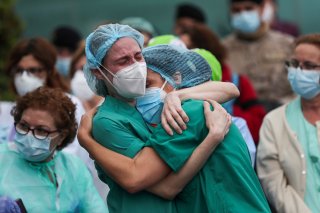 The novel coronavirus is not just a catastrophe for global public health, it will also bring about a shift in the world order. Pandemics have affected and altered world orders in the past. The Black Death pandemic in the fourteenth century AD, also believed to have originated from China, killed 90 percent of the people of Hubei, and about half of China’s then population of 123 million and reduced the world’s population by over 100 million. It brought the Mongol world order to its knees. After building the largest land empire in world history, the Mongols had developed trade on a vast scale, linking East Asia, the Middle East and Europe into a vast economic network. They had built roads, bridges, relay stations, and provided security for traders and travelers. These avenues of commerce became conduits of the spread of the pandemic. The plague disrupted the interlocking economic relationship, known as the Khubi system, between the empire’s four segments, the Yuan in the East (Beijing), the Chagatai Khanate in the center, the Ilkhanate in Southwest (Central Asia and Iran), and the Golden Horde in the northwest on Russia’s border. European cities closed their borders and turned on the Jews, whom as usual, blamed for the catastrophe. It cut China off from Europe for centuries.

Compared to the Black Death, the novel coronavirus, also known as the coronavirus seems rather mild; despite its high contagion power, it seems to have a lower mortality rate so far. The Black Death killed plenty of younger people (the 1361–2 outbreak is called the Children’s Plague (pestis puerorum, mortalité des enfants), the coronavirus kills mostly the older. Yet, despite better medicine and medical care, many countries have been caught grossly unprepared. The quarantine system invented by the sixth Umayyad caliph Al-Walid in early eighth-century AD, in Damascus, seems to be the only effective way to combat the spread of the virus, aside from fashionable postmodern term: “social distancing.”

How will the coronavirus affect the current world order then? It’s still early days, but some trends are clear.

First, the crisis is going to undercut support for globalization, which was already weakened by rising populism and the policies of the Trump presidency. The lightning speed in which the virus spread around the world, thanks to economic interdependence as well as tourism and travel, is going to be blamed on globalization and will create a further backlash against it. The closing of national and provincial borders and reassertion of state sovereignty has further exposed one of the most powerful myths of globalization as a borderless world.

Second, the virus may be the nail in the coffin of the idea of West, including whatever remained of transatlantic relations after Trump-wreck. The G-7 failed to issue a statement because of the Trump administration’s insistence on calling out the “China virus.” In the meantime, Italy’s former Prime Minister Enrico Letta has warned in a Guardian interview of April 1 of Europe catching “the Trump virus,” with nations pursuing “Italy first,” “Belgium first” or “Germany first” approaches over a common EU strategy Support for the EU in Italy, Europe’s and world’s largest victim of coronavirus, has plummeted, with 88 percent of Italians in a recent poll feeling let down by the EU.

Third, the virus might strengthen Trump’s “America first” agenda. At the White House Coronavirus briefing on April 2, 2020, Peter Navarro, the architect of Trump’s trade war, said “if there’s any vindication of the president’s by American secure borders and a strong manufacturing base philosophy, strategy and belief,” he says, “it is this crisis because it underscores everything that we see there.” Yet, the image of a hapless nation with the world’s greatest economy and military caught with its pants down is grossly at odds with Trump’s MAGA aspiration.

Yet, the crisis seriously diminishes America’s credibility globally and that of the Trump administration within America. The image of a hapless superpower with the world’s greatest economy and military caught with its pants down and then brought to its knees by a virus that had been forewarned will be hard to forget. While Trump may not care about international public opinion, many Americans are feeling a sense of helplessness that cuts across party lines.

All this could mean another nail in the coffin of the Liberal International Order, already reeling from Trump’s policies and Western populism.

Fourth, will China gain from this crisis? The crisis puts the relative political and economic models of the United States and China under the global spotlight, and whoever comes out it better will gain more credibility. There is a chance that its economic impact may be harsher on the United States than on China. Should this happen, it will accelerate the power shift to Asia, which was already in process. The loss of America’s both hard and soft power will accentuate the transition to a post-American order, or what I have called the Multiplex World.

Yet, while China managed to bring the outbreak under control, it has been criticized for its initial failure to act transparently and effectively to prevent the virus from getting out of control undercuts Beijing’s global leadership ambitions. This will not be easily forgotten or forgiven, even as Beijing seeks to repair the damage by providing aid and advice to many nations to help them cope with their own outbreaks. China’s image has not been helped by the conspiracy theory promoted by a foreign ministry official that blames the United States as the source of the virus, and the under-reporting of infections (now admitted) and deaths, which might have given a false sense of the human costs of the virus, hampering other nations’ efforts to combat it. Until China accepts its own share of responsibility for the outbreak, its international image is not going to be rehabilitated.

The virus may have other costs for China, even if its domestic economy picks up, it might make China a less attractive investment and tourist destination. It might speed up U.S.-China decoupling and supply chain reorientation away from China.

Indeed, the crisis may well end up putting other emerging powers, such as India, and Russia in a negative light, should they replicate the West’s failures.

Finally, pundits will debate whether national responses to the crisis put democracies in a more positive light over authoritarian states. But the countries that have offered reasonably strong responses to the coronavirus include both. The real contest here is about governance, rather than ideology or regime type.

The present crisis underscores the reality that effective governance trumps material power rank (economic or military) in coping with global threats. The United States has come out as a “government ill executed,” as Fareed Zakaria wrote, using the language of Alexander Hamilton. Again it’s too early to judge their eventual success, but if the present trend holds, the “winners,” if that is the right word, here are the small and medium countries/territories who were able to rise up to the occasion with testing and containment measures, such as Singapore, South Korea, Hong Kong and Taiwan. This is very much in keeping with the idea of “G-Plus” leadership, a key element of the idea of Multiplex World, which stresses issue-oriented governance by multiple actors over traditional great powers status in defining the emerging world order.

While there is a real risk that the virus could make nations more inward-looking and promote mercantilist self-reliance over interdependent cooperation, there are some silver linings, provided the international community learns the right lessons from the crisis.

Contrary to those who may see the crisis as signaling the dangers of globalization and the virtues of self-reliance, I believe it vindicates the supporters of interdependence. The real argument of interdependence theory is not that it prevents conflict, but that it makes conflict more costly to all parties in an interdependent relationship. The coronavirus crisis has proven just that.

The crisis will not end globalization, but hopefully, it will increase demands for making it more humane and regulated. But countries need to reverse over-tourism, a major factor behind the spread of the virus, and thus better protect their national heritage and the global environment. The crisis should create great awareness for more investment in national and global public health (keeping in mind that Trump was cutting the U.S. contribution to WHO by half), especially in countries like the United States. Moreover, the crisis underscores the importance of cooperation, both bilateral and multilateral. The breakdown of U.S.-China relations made the US and international response to the coronavirus much weaker than in past crises such as SARS, Ebola, Swine Flu and Avian Flu. If so, then a major lesson of the crisis will be the need for more rather than less global cooperation.

Amitav Acharya is a professor at American University in Washington, DC and a fellow of the Berggruen Institute in California.