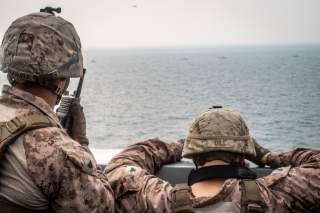 The 2003 U.S. invasion of Iraq was deeply opposed by key U.S. allies like France and Germany, who, while they agreed with the U.S. judgment regarding the villainy of Saddam Hussein, disagreed vehemently with the use of military force to solve the problem. The result was a precipitous decline in transatlantic relations, to the point that several U.S. representatives directed congressional cafeterias to rename French fries “Freedom Fries.” As tensions continue to escalate due to President Donald Trump’s high-stakes brinkmanship with Iran, the United States risks another, more serious, break with its European allies—one that could permanently injure U.S. financial power.

The invasion of Iraq led to a crisis in the transatlantic relationship because France and Germany vehemently opposed the use of force to prevent Iraq from obtaining weapons of mass destruction (WMDs). Instead, seeking to use diplomacy, they questioned the evidence of Iraqi WMD development and the U.S. claim that installing a democratic government would lead to a flourishing of democracy in the region. As a result, a narrative of Franco-German—“Old Europe”—betrayal developed in the United States, and European support for U.S. leadership on the world stage plummeted in opinion polls. While the invasion created divisions among European countries at the time, sixteen years later Europeans nearly unanimously regard the invasion as a mistake and a misguided example of U.S. unilateralism.

The United States, the European Union, and Iran have been building to the current moment since before the 2016 U.S. presidential election. But Iran’s recent breach of the maximum level of uranium enrichment mandated by the Joint Comprehensive Plan of Action (JCPOA) and its seizure of British oil tankers, combined with U.S. troops being deployed to Saudi Arabia for the first time since the Iraq War, have raised the stakes and transatlantic tensions ever further.

As a candidate, Trump repeatedly criticized the JCPOA signed under the Obama administration to prevent Iran from developing a nuclear weapon, echoing claims that the agreement was too narrow and not tough enough. For Europeans, the agreement was a success due to its limited aims and bought time for further negotiations. Trump’s announcement on May 8, 2018, that the United States would formally leave the JCPOA and unilaterally reimpose broad economic sanctions was roundly criticized by France, Germany, the United Kingdom, China, and Russia. These countries announced their determination to stick to the deal. The year following Trump’s announcement has been marked by escalating U.S. pressure on Iran, matched by increasingly desperate European attempts to save the deal.

Almost immediately after the U.S. withdrawal, French finance minister Bruno Le Maire sought to find ways around U.S. sanctions, suggesting that the European Union could use a blocking statute to protect European companies from U.S. secondary sanctions. In August 2018, German foreign minister Heiko Maas called for Europe to act as a counterweight to the United States and advocated for the creation of a European payments mechanism akin to the Society for Worldwide Interbank Financial Telecommunications (SWIFT) system. In September 2018, European High Representative for Foreign Affairs Federica Mogherini announced the creation of a “special purpose vehicle” (SPV) to allow European companies to bypass U.S. sanctions and continue trading with Iran, in hopes of maintaining the deal. The SPV was later formed officially as the Instrument for Supporting Trade Exchanges (INSTEX) and recently became fully operational. Going yet further, the European Commission presented steps in December 2018 to increase the role of the euro in global payments. As noted by the commission, European businesses trade using the U.S. dollar—thus tying them to the U.S. financial system and exposing them to U.S. sanctions or “unilateral decisions that directly affect dollar denominated transactions” in the Commission’s parlance.

Comparisons between the current crisis with Iran and the Iraq War have been made, but the risk that this dispute poses for the transatlantic alliance may be larger still. Admittedly, European companies have complied with U.S. sanctions despite the offer of the EU’s blocking statute. Chancellor Angela Merkel quashed Maas’s call for a European SWIFT, and INSTEX remains largely symbolic with no companies using it—and little expectation from the U.S. side that companies will use it to trade in sanctioned goods. But that these measures were proposed in the first place is of huge importance.

Even if war or the collapse of the Iranian regime is avoided, either of which could spur on another migration crisis, American sanctions directed at Iran have greatly affected European business and security interests. To protect both, Europe has threatened measures that would, if carried out fully, begin a process of unwinding the global economic integration that has proceeded since the end of World War II. Such steps would strike at the heart of U.S. economic power by shifting trade and financial transactions away from the United States and provoke a potentially extreme U.S. response.

But unlike Iraq, a split over Iran could be a turning point for much more than just the transatlantic relationship. The creation of an alternative financial architecture as threatened by the EU could not only lead to a financial balkanization along political lines, as countries that disagree with U.S. policies could much more easily skirt U.S. sanctions, but also to greater difficulties in coordinating responses to future global financial crises. Beyond renaming cafeteria food, the current transatlantic divide over Iran could usher in a new and more unstable era in global politics.

Sam Denney is a 2019 Europe Fellow with Young Professionals in Foreign Policy. Prior to YPFP, he worked as an intern for the Europe Practice at the Albright Stonebridge Group in Washington, DC, for the European Union Affairs unit at the State Chancellery of North Rhine-Westphalia in Düsseldorf, and for the Committee on Affairs of the European Union in the German Bundestag in Berlin. He received an MA in German and European Studies from Georgetown University’s School of Foreign Service in 2018 and a BA in German and European Studies from Vanderbilt University in 2014. Twitter handle: @samddenney