How Dangerous Is Russia? 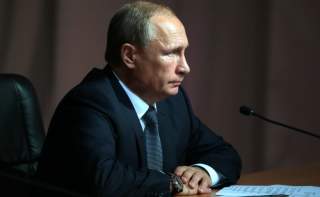 While Donald Trump calls for improved relations with Russia, the Republican platform, even after the modifications pushed through by Trump surrogates, still views the Russian Federation as a threat to U.S. interests. Even more surprising is that the Democratic establishment, which four years ago mercilessly mocked Governor Mitt Romney’s characterization of Russia as the prime geopolitical challenge to the United States, now seeks to outflank the Republican nominee from the right by emphasizing, as Josh Rogin has noted, that the Democrats are the “anti-Putin, tough-on-Russia” choice.

The “Russia threat” is emerging as one of the principal foreign policy themes of this election. After the release this past weekend of e-mails hacked from the Democratic National Committee server by hackers widely considered to enjoy Russian state sponsorship, Democrats and Republicans opposed to Trump’s candidacy have vied with each other in even more ominous depictions of the evil intentions and machinations of the Kremlin. As with assessments of Russia’s actual military capabilities, however, it is important to put the Russian challenge into context and perspective.

For the past several months, the teaching and research faculty of the Naval War College with functional and regional expertise on matters Russian and Eurasian have been attempting to do just that. The recent release of the “Russia Futures Project—Sense of the Faculty” report contains the principal conclusions of the working group, some of which clash with the dominant narrative increasingly being sounded in Washington circles.

Often, one hears about Vladimir Putin’s “master plan” for weakening the West and ensuring Russian hegemony over Eurasia. In assessing Russian moves, the faculty experts tended to point to signs that Putin, in contrast, is an “opportunist” or a “jazz improviser” who seeks to gain tactical advantages from changes in the regional and global situation. (The sudden rapprochement between Turkey and Russia in the aftermath of the failed coup attempt in Ankara and Istanbul, after months of frosty relations and the risk of an all-out clash in the aftermath of the downing of the Russian jet in November 2015, lends credence to this conclusion.) Estimates about the durability of Russian power also need to take into account negative long-term economic and demographic trends. Even if, as some 65 percent of the faculty participants concluded, Russia is likely to see a modest economic recovery in the years ahead, there is no expectation that the high rates of growth experienced during the first two terms of the Putin administration are likely to return.

In keeping with other sober assessments of Russian military power, the faculty group overwhelmingly concluded that while Russian rearmament and acquisition of new capabilities, particularly naval ones, were indeed increasing, this growth still remained moderate and was occurring from a low starting point—the nadir of the post-Soviet Russian military collapse. Increasingly, Russia is developing and enhancing its abilities to engage in more effective anti-access/area denial activities around its territories, and to possess limited power-projection capabilities into other regions.

What, then, does this modest increase portend? Despite the bellicose rhetoric, only 18 percent of the group was prepared to label Russia as the primary threat to European security; internal problems and the migration crisis were seen as a much more serious problem for European cohesion. In addition, even with a slew of reports suggesting that the Baltic states are in grave danger from Kremlin revanchism, 71 percent of the group rated the prospect of a Russian military move against the Baltics as very low—but this assessment with the understanding that NATO Article 5 guarantees were intact. More recent statements, suggesting that the United States’ willingness to honor its commitments may depend on particular circumstances, could have the possibility of increasing ambiguity in Moscow’s mind as to whether a strike against the Baltic states would in fact lead to a NATO response.

Similarly, the report concludes that Russia will continue its strategic cooperation with China—a point reinforced by the recent announcement that Russia will hold joint drills in the South China Sea with the Chinese navy, but that neither Russia nor China is prepared to conclude any formal alliance.

There is no doubt that Russia has both the capability and the will to make trouble for the United States (or, conversely, to bolster U.S. efforts in the pursuit of shared goals). But how does this rank on a grand scale? A slight majority of the experts (53 percent) agreed with the conclusion that Russia presents “a medium-level threat” to the United States, where Moscow has the ability to create obstacles and difficulties for the United States—but where “its mischief is limited.” 29 percent argued in favor of seeing Russia as a “significant” threat that may require “extensive new defense outlays and deployments.” Only 6 percent were prepared to characterize Russia as a “gravely serious threat” that represents the “most serious” challenge to U.S. security.

In an election campaign, candidates want to throw red meat into the scrum, and both Russia and Putin himself provide tempting targets. At the end of the day, however, policymakers have to make tough but informed judgments and balance vigilance with due caution and prudence. When the smoke clears from the election fight, reports like these will be waiting for the next administration to make sober decisions about what to do about Russia.