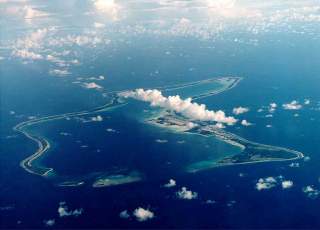 The small island of Diego Garcia (DGAR) in the Indian Island is not a place that the U.S. Media knows or talks about even though it is arguably one of the most important pieces of real estate in DOD’ strategic arsenal. It is isolated in the middle of the Indian Ocean and that isolation enables it to have security from onlookers or foreign navies that would monitor challenge its activities. DGAR is closed to outsiders and that gives the U.S. military a great deal of freedom to preposition military equipment and use it as a staging area for military operations. As Tom Friedman has often said, the world is getting hotter and more crowded and these isolated little pieces of real estate cannot be replicated by the DOD. Given that, U.S. policymakers need to wake up to the challenges facing continued U.S. military presence on DGAR and take actions to shore-up its basis for remaining there—a long-term lease with the United Kingdom. That fifty-year lease commenced in 1966 and expired in 2016. The UK extended the United States’ lease to the DGAR facility in 2016 until 2036.

Technically an atoll, DGAR is part of the Chagos Archipelago and is under British administrative control. It is the largest of about sixty very small islets (roughly sixty-five square miles) that forms Archipelago south of India in the Indian Ocean. Diego Garcia is 1,100 miles south of India and about 2,200 miles east of the Africa’s Eastern Coast. Its 12,000-foot runways can accommodate long range aircraft; including B-52, B-1, and B-2 bombers which can operate as far North as Afghanistan or as far Northeast as the South China Sea and Taiwan. DGAR is host for U.S. maritime prepositioning vessels, combat support vessels, communications facilities, fuel stores, and has the port and airport facilities to accommodate large vessels or combat aircraft. Since DGAR is sovereign British territory, it is beyond the legal jurisdiction of U.S. courts (and habeas corpus petitions) and for this possible reason it has reportedly been used as a terrorist detention site. Most importantly, DGAR is far enough away from China’s coast—and its artificial islands in the South China Sea—and presumably out of range of China’s HQ-9 surface-to-air missiles and YJ-12 supersonic anti-ship missiles that would otherwise threaten U.S. ships and aircraft operating in the Asia-Pacific region.

Diego Garcia has been a refuge for mariners for centuries because of the availability of freshwater and ample fish and has been a valued military installation since World War II. According to Richard Edis’ account, France administered the archipelago as a dependency known as Ile de France until the British captured the territory in 1812 and renamed it Mauritius. About forty years later in the late 1770s the East India Company decided to establish a replenishment base on Diego Garcia and not long after a British military garrison was established. France ceded its rights to Great Britain in 1814 and administered it as a Dependency of Mauritius.

Even though slavery had been abolished in the British Empire in 1807, vestiges of the slave trade remained in remote parts of the empire including Diego Garcia and Mauritius until the mid 1830s when the small colony of slaves from Mozambique or Madagascar in DGAR were either abandoned or emancipated. Those remaining worked on three privately owned coconut oil plantations and helped in the resupply of vessels that made port visits. The overall population numbered 350–550 and, according to Edis’ account, the people on the island lived rather well (and peacefully) because of the abundant fisheries and their ability to purchase tools, medicine, etc., with revenues from coconut oil that was produced on the island.

In World War II, Diego Garcia and other Indian Ocean bases assumed increased importance to the British and at one point DGAR hosted a small squadron of Catalina seaplanes which were used for maritime surveillance. Throughout the remainder of the 1950s and early 1960s, DGAR’s military activities subsided and the actual population of labor associated with operation of the coconut plantations declined due to low birth rate.

After DOD expressed interest in establishing a base at Diego Garcia, the Chagos Archipelago, was detached in 1965 from the British Colonial Dependency of Mauritius to form the British Indian Ocean Territory (BIOT). The following year, the United States and Great Britain signed a fifty-year basing agreement until 2016. The coconut plantations were purchased (and closed) by the British government when the base was created. The legal justification for involuntarily the people was that none owned real property; all were contract workers with the owners of the coconut plantation. The remaining workers were offered, according to Edis, a “limited” degree of choice on where to live: Agalega, Seychelles, Mauritius, or to working plantations on two of the Northern Chagos Islands. The actual numbers of those evicted vary. Edis suggests that about less than two hundred were removed while other sources put the number at 483 men, women and children. Today, there are about 1500–1800 persons who call themselves descendants of the original residents.

Diego Garcia is suffering the same fate as other islands in the Indian Ocean: rapidly accelerating reef loss due to ocean acidification/warming. According to Edis, over 95 percent of Diego Garcia’s seaward reefs have been killed due to elevated seawater temperatures. While this does not create any immediate operational impacts, it certainly impacts the long term ability of the DGAR to be able to sustain a large population.

The issue of sea level rise is probably more acute; indeed, one of the reason why the 2008 UK House of Lords deemed that resettlement of the atoll was not possible coastal erosion of the Northwest Shore. On average, DGAR has roughly is four feet above sea level (most areas do not exceed 6.5 feet) and contains ten square miles of dry land. The initial problems will be salt water intrusion into fresh water resources, storm surges, and intermittent tidal flooding, all will vary in severity. The U.S. Navy currently has a forty-person construction detachment installing imported rocks to prevent further encroachment from the sea.

For the United States and the UK this creates two complications. First, the danger of inundation creates issues for engineers who will have to erect systems such as seawalls and barriers to protect critical base structures. These systems will be quite expensive since all the materials have to be imported and the DOD will need to make the case that the operational benefits outweigh the costs of making improvements to leased real estate that has a uncertain political future.

The second issue with loss of arable space is that it deprives the United States and the UK of a future bargaining chip should it wish to grant some number of the Chagosians return rights so they might engage in agricultural or aquaculture activities in the very large lagoon. The rich fisheries in DGAR’s lagoon holds the promise of viable economic activity should some people wish to return. Similarly, the use of employing persons as labor to support base operations and supply local fruits and vegetables versus relying upon imported contractors—mostly from the Philippines—to provide base services is something worthy of consideration. For over seventy-five years, DOD has been able to successfully operate in foreign countries because it makes use of local suppliers and host nation labor. That preference for local labor helps to solidify relationships between DOD and the host nation. For it to work in this case any “returnees” would need to be able to perform necessary support tasks or be trainable.

There has been a significant domestic and international litigation questioning the legitimacy of the British mandate over DGAR and ways in which the UK managed the removal of Chagos islanders in 1971.

Actions by Former Residents and Descendants

In 2011–2012 the 1,786 Chagos descendants living in the UK pursued an action in the European Court of Human Rights (ECHR), claiming that they had been denied their human rights because of their “callous and shameful” removal from DGAR and lack due process. In short opinion, the Court ruled in 2012 that since the descendants of the islanders had received modest compensation and renounced their claims in writing, their claims were disallowed.

Legal challenges were then brought in the British Courts over the removal of the former residents 1971 to make way for the U.S. base. They first petitioned the House of Lords. That petition was unsuccessful because the Lords, as noted above, felt the area could not sustain large populations and that the former residents had been fairly treated. The Lords decision was appealed to UK Supreme Court which dismissed the appeal by a 3-2 margin in 2016. For the time being at least, the domestic legal question of whether the UK government had complied with its own laws/procedures is in check; however, but a 3-2 decision does inspire confidence that future challenges won’t be mounted.

Newer International Legal Challenges by Mauritius and the UN