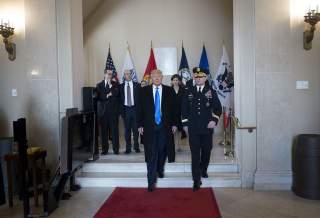 President Trump’s foreign-policy viewpoints have mystified, if not frightened, many in this country and around the globe. His recent interview with the Times of London and the German paper Bild, saying again that NATO is “obsolete” and suggesting some kind of grand bargain with Russia that could lift the sanctions, only added fuel to the fire.

In his inaugural speech, he touched very lightly on foreign policy. His central theme was “America First,” repeated for emphasis. He spoke of vast sums spent to subsidize foreign armies while depleting our own armed forces. We have, he said, “defended other nations’ borders while refusing to defend our own.” His only mention of our allies was a pledge to “reinforce old alliances and form new ones—and unite the civilized world against radical Islamic terrorism, which we will eradicate completely from the face of the earth.”

This is not likely to calm the concerns of those who have raised questions about where his foreign policy will lead the country.

It is appropriate for new presidents to ask hard questions about our foreign policy. There is nothing sacred about policy—even long-standing policy with broad support. The world changes, and so do the threats we face. But Trump should follow the wise admonition to “Stop, Look and Listen” before running onto the world’s political highways.

For example, when the North Koreans threatened to test an ICBM, he tweeted: “it won’t happen.” Trump, along with many others, sharply criticized President Obama for drawing a “red line” against the use of chemical weapons by Syria’s President Assad against his own people, and then failing to take military action when Assad did just that. Does Trump recognize that his tweet on North Korea has drawn a similar red line? What will he do if the U.S. intelligence community presents clear evidence the North Koreans are about to test launch an ICBM? Given his criticism of China, will the Chinese support much stronger action against North Korea? If not, will Trump launch a preemptive military strike by relying on information from the very agencies he has so recently maligned? Does he tell the American people that he now believes what the agencies tell him?

North Korea may well be his first real foreign-policy crisis. Every new president faces such a crisis early in his term. The new president learns that crisis decisionmaking requires careful consideration of often conflicting imperatives, and is very different than campaign sloganeering. He also will discover who on his team performs well and who doesn’t. But, most importantly, he must also examine his own performance. If he made mistakes, he must acknowledge them and draw the necessary conclusions. These early episodes will do much to shape the country’s long-term national-security strategy and decisionmaking process.

President Trump has made foreign-policy pronouncements on several other hot-button issues, each having the potential to bloom into real crises. These include threatening import tariffs on Chinese goods, reviewing the “one China” policy, ending the nuclear agreement with Iran, relocating the U.S. embassy in Israel to Jerusalem and questioning our NATO treaty commitments. But it is his nascent policy toward Russia that is most puzzling and concerning.

There is really only one country that possesses the power to destroy us, and that is Russia. It is therefore wise to explore ways to improve relations with Russia and reduce the likelihood of nuclear war. Our differing worldviews and policies based on them, however, must also be recognized as a continuing source of friction. The United States and its allies—meaning NATO allies and others in Europe who feel more immediately threatened by Russian assertiveness than we do, as well as Japan, South Korea and others in Asia—believe in democracy, human rights, the rule of law and the liberal international order that was established after World War II. Russian views on these matters are quite different. Managing these differences requires statesmanship and knowledge of the U.S.-Russian relationship that has developed over decades. There is probably no more important foreign-policy task faced by the new administration.

Relations with Russia are now at a post–Cold War low over Ukraine, Syria, Russia’s interference in the U.S. elections and support for right-wing, populist, anti-EU parties in Europe. Trump has commended Russia’s President Putin for being a strong leader and smart for not responding in kind to the U.S. expulsion of thirty-five Russian diplomats. Does he believe he and Putin can strike a grand bargain, in which we permit Russia to have a much freer hand in Ukraine, eastern Europe and the Baltics and remove sanctions, in return for greater help from the Russians in defeating ISIS? Achieving the latter is already a key Russian objective, so what is to be gained by the United States making concessions over Ukraine?

Several presidents have tried to dramatically improve our relations with Russia early in their terms. None have been successful. President Kennedy had a disastrous meeting with Khrushchev in June of 1961 in Vienna. Early in 1977, President Carter sent Secretary of State Cyrus Vance to Moscow, over Vance’s objections that the meeting was premature; that produced nothing but disdain by the Russians for Vance and Carter. In June 2001, President George W. Bush looked into the eyes of Vladimir Putin and pronounced him “very straightforward and trustworthy.” Finally, President Obama’s effort to “reset” U.S.-Russia relations famously fell short, to say the least.

Vladimir Putin is straightforward, but not in the sense Bush understood. He is straightforward in seeking to reestablish Russia as a major force in global affairs, and to win recognition that the countries of the former USSR are a Russian sphere of influence. He appeals to Trump’s deal-making style by hinting at a grand bargain to reshape the international political and security environment.

Putin’s worldview was shaped by his Cold War experience as a KGB officer and the alleged Western dismissal of Russia after the fall of the USSR. He mistrusts democratic practices and fears popular “color revolutions,” which he believes are Western plots aimed at unseating him. The Russian hacking of Democratic National Committee servers and their skillful use of WikiLeaks to feed them into the U.S. presidential campaign is fully consistent with similar efforts to undermine democracy in Georgia, Estonia, Ukraine and elsewhere.

The United States now needs to thoroughly examine its national-security goals and objectives, assess its hard- and soft-power assets and shortcomings, reaffirm its alliances, and determine what the major threats are and how to deal with them. With Russia, this means finding the areas where cooperation is possible, such as fighting ISIS and terrorism, nuclear proliferation, arms control and keeping the Arctic as a place for peaceful cooperation. We also need to recognize areas where we disagree and plan on how to manage them. This is Statecraft 101, and that kind of hard-headed realism is vital right now.

We are not back in the Cold War, and containment is not the strategy to confront Russia today. Improved communications are necessary with Russia, including with the military, to reduce the risks of unintended conflict and provide better understanding of mutual interests and areas of difference. At the same time, our democratic values and principles that are now being challenged must be reaffirmed; these are basic to American greatness. Like it or not, the United States is the cornerstone of the liberal-democratic international order. It is often said that being responsible makes one act responsibly. Let us hope that happens with Trump. Indeed, it is an axiom of statecraft that a leader is entitled to his own policy, but not his own facts.

Jeffrey H. Smith is Senior Counsel at Arnold and Porter, Kaye Scholer and previously served as the General Counsel of the CIA and as an Assistant Legal Adviser at the State Department. Kenneth Yalowitz is the Director of the Conflict Resolution Program at Georgetown University and a Global Fellow at the Woodrow Wilson Center, and was U.S. Ambassador to Belarus and Georgia.