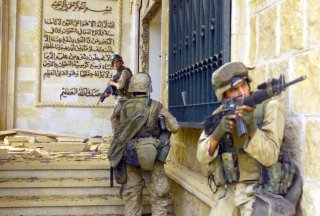 THE OBAMA administration’s intended “pivot” to Asia was a valid statement not only about the importance of developments in that region but about the disproportionate attention and resources the United States has expended elsewhere, and especially in the Middle East. An immense share of the blood and treasure the United States has lost overseas in the past couple of decades has been in the Middle East, an expenditure that has not brought proportionate benefits. The net effect on U.S. interests has been, in many respects, negative.

America’s concentration on the Middle East has persisted for a variety of reasons, some of them reflecting the region’s special characteristics and some having more to do with domestic politics or habit. There is oil, of course, which has been a major reason for special attention ever since Franklin D. Roosevelt met with Ibn Saud on an American cruiser in the Suez Canal during the closing months of World War II. As the birthplace of the world’s three great monotheistic religions, the Middle East is connected to the religiously rationalized violent extremism that has preoccupied Washington for the last fifteen years. Old habits dating from the Cold War, of viewing the region as a chessboard for great-power competition, have been encouraged by Russia’s recent activities there. And the attention feeds on itself; much of the hand-wringing over a conflict such as the one in Syria is due not only to admittedly bloody events on the ground but also to hand-wringing that already has taken place and sustains the notion that the conflict is somehow a test of U.S. mettle.

The new U.S. administration will not be able, any more than its predecessors, to formulate policy toward the Middle East from scratch, and it will be subject to the usual tyranny of the in-box. To some extent, devoting substantial attention to leftover problems is commendable. And the United States has broken a lot in the Middle East. Nonetheless, the new administration needs to return to basics and consider, with more care than most current policy debate exhibits, what in the region constitutes U.S. interests and what does not. The very extent of American involvement in the Middle East has implied many objectives (for example, deposing the president of Syria) that come to be mistakenly treated as if they were themselves U.S. interests. Moreover, responsibly devoting attention to what one has broken has too often digressed into treating sunk costs as investments to be actively worked in the hope of somehow getting a positive return—a view often taken toward Iraq, not surprising given the scale of the costs that the United States has sunk there.

A zero-based perspective would identify several important interests in the Middle East, even though collectively they are not commensurate with the U.S. resources that have been devoted to that region. Oil still matters, although in ways that have less to do with domestic consumption than with effects on the global economy. Reducing violent extremism is another legitimate interest in the Middle East, given its ability to physically harm American citizens and property. Although the connection between circumstances on the ground in the Middle East and terrorist threats in the West is routinely overstated, events in the region do inspire attacks elsewhere. The United States has an interest in the losing streak of the so-called Islamic State (ISIS), to dispel any remaining winning image that would help to galvanize would-be radicals in the West.

Curbing weapons proliferation should be among the new administration’s priorities. A regional state whose nuclear program was the subject of much alarm—Iran—has had its program rolled back and any path to a nuclear weapon blocked by a multilateral agreement that went into effect in 2015. The agreement, which includes the most stringent restrictions and most comprehensive monitoring to which any state has willingly subjected its program, provides a model for further nuclear nonproliferation efforts in the region. In the meantime, however, proliferation of conventional weapons is the more serious problem, as punctuated by the scattering of Libya’s arsenal following the overthrow of Muammar el-Qaddafi.

The Middle East’s geographic status as a continental crossroads entails another set of interests, involving military access and transit and including uninhibited passage through the Suez Canal as an ingredient in the global projection of U.S. military power. But means should not be confused with ends. A military presence in the Middle East does not by itself have positive value for the United States—and can prove counterproductive, as reactions to American boots on the ground, with the violent consequences that sometimes have ensued, have demonstrated.

At least as important are the outcomes the United States should not want to transpire. It is in the national interest that no single power come to dominate the Middle East and that, instead, competing players balance against one another. Such balances preclude any single country posing significant threats outside the region and facilitates outsiders, including the United States, freely conducting their business inside it. Fortunately—and unlike East Asia, where a major question is how dominant an increasingly powerful China will become—there is no plausible threat of such a regional dominator emerging in the Middle East. The regional state with the most powerful military and most advanced economy, Israel, throws its military weight around, but will not become the overlord of a largely Arab region. The military strength of the most populous Arab state, Egypt, has rusted away, and the country is seized with economic and other internal problems.

The next most populous state in the region, Iran, also is not a candidate for regional domination, despite ritualistic rhetoric suggesting that it is. It is struggling economically, and its military is not a technological match for the advanced armed forces of the Gulf states, let alone an instrument for regional dominance. With regional conflict increasingly drawn along sectarian lines, the Shia-centered state ideology of Iran is not a basis for hegemony in a Middle East that is mostly Sunni as well as Arab. Nearly four decades after the revolution, Iranian leaders realize as much as anyone else that any hopes they may have once had for similar revolutions in the area have been dashed—with the Arab Awakening not having augmented Iranian influence and in some places, such as Syria, straining it. Such a realization is reflected in Iranian regional policies, which entail the defense of existing regimes (in Syria), including where such defense parallels U.S. efforts (in Iraq). Where Iran is not defending a status quo, it is interfering far less than regional rivals such as Saudi Arabia (in Yemen). It favors change that almost everyone else in the region also favors (in the Palestinian territories).

The United States also has an interest in averting armed conflict that becomes so severe that human suffering escalates and instability and refugees are exported. The basic point to remember is that the ill effects to be avoided flow from armed conflict itself, more so than from any specific outcome of a conflict. The most pressing U.S. interest in the Middle East is to minimize the expenditure of American blood and treasure and avoid actions that stimulate violent reprisals. This concept often gets disparaged as not being a basis for strategy and as nothing more than “don’t do stupid sh*t.” Whether the next administration refrains from doing stupid sh*t will be a big part of whether, four years from now, its policy meets with success or failure.

Some standards used to measure the supposed advance or retreat of U.S. interests in the Middle East should not be. One is democratization, notwithstanding the intrinsic value of popular sovereignty. Apart from providing channels for grievances that might otherwise find more violent and extreme avenues, it has little direct effect on U.S. interests in the region. The very weakness of democracy in the Middle East makes it a poor criterion for favoring some states over others. Tunisia is probably the most democratic country in the region, but it is small and peripheral to the issues that will most engage U.S. policymakers. In Israel and the territories it controls, a well-established democracy operates within the dominant population, but it is a system founded on ethnic and religious distinctions and in which a large subjugated population lacks political rights. Iran has presidential and parliamentary elections that matter and in which the entire population participates, but its democracy is vitiated by the power of unelected elements in the regime to do things such as arbitrary disqualification of candidates. Democracy in Lebanon is constrained by bargains struck by confessional groups, in Egypt, it is a formal facade for rule by a military strongman and, in monarchies such as Kuwait, elected assemblies, where they exist, can be dissolved at the whim of the monarch.

A misleading standard that has come into vogue more recently is treatment of the region in Cold War terms, in which increasing or decreasing Russian activity is equated with U.S. retreats or advances. This conception is flawed. There is no global ideological competition comparable to that between the Soviet Union and the United States. In the Middle East, there is no regional ideological corollary to Nasserite Arab socialism. Russian and U.S. interests in the region are not zero-sum. And besides, any Cold War–style scorecard would show that Moscow’s long-standing position in Syria is about its only direct and long-term presence in the region, and is far more modest than the U.S. positions from Egypt to Bahrain and much else in between.