How Donald Trump Used the Kosovo Conflict to His Advantage 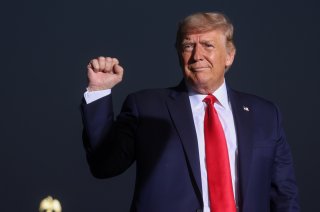 President Donald Trump marked another diplomatic victory after announcing that Kosovo and Serbia would normalize economic relations. As part of the agreement, Kosovo will recognize Israel, and Serbia will move its embassy to Jerusalem. Similar to last month’s historic Israel-UAE agreement, Kosovo and Serbia’s deal is just another one of Trump’s tactics to advance his foreign policy agenda and boost his electorate before November. Whether an average American voter cares about the Kosovo-Serbia dispute is questionable. However, one thing is certain: After more than a decade of unsuccessful European mediation, the Trump administration is assisting Belgrade and Pristina to overcome their differences and advance not only their economic interests but also their pivot to the West.

Serbia and Kosovo’s economic accord is anything but novel as both countries have already been taking steps toward economic normalization since 2017. This time around, both countries agreed to join the mini-Schengen zone, operationalize the Merdare Common Crossing Point facility, promote freedom of religion, locate and identify the remains of missing persons from the Kosovo conflict, and work to decriminalize homosexuality.

Yet, the most pressing issue in the agreement is Trump’s motive to distance the Balkans from China and Russia, who have filled the power vacuum due to the United States and the European Union ignoring the region for two decades.

Serbia’s “strategy of neutrality,” balancing between Russia and China, is unacceptable to America. Hence, this agreement is a litmus test for President Aleksandar Vucic to decide how he wants to lead Serbia, as this is a unique opportunity to return to its democratic and liberalizing path. This deal forces Belgrade and Pristina to forego using China’s 5G network. Given China’s push to install 5G networks via Huawei, turning away from 5G might challenge Serbia’s ties with China. The agreement also asks for energy diversification. Given Serbia’s close ties with Moscow, this may jeopardize relations between Belgrade and Moscow. Both of these further the Trump administration’s foreign policy goals.

But the biggest coup for Trump occurs with the agreement’s focus on the Middle East.

The agreement requires both parties to designate Lebanon’s Hezbollah as a terrorist organization. Kosovo and Serbia agreeing to this designation advances Trump’s ongoing maximum pressure campaign on Iran, which appeared significantly weaker on the global stage after the United Nations Security Council rejected the U.S. proposal to extend the arms embargo on Tehran. This agreement stands in the face of previously strong bilateral relations between Serbia and Iran. In this vein, in June, Iranian President Hassan Rouhani called Vucic to expand economic ties between the two countries, stressing the importance of not allowing the US maximum pressure campaign to erode their economic relations.

Consequently, the Serbian-Palestinian relationship will falter. Palestinian official Saeb Erakat’s rash response to the agreement underscores how the Palestinians will respond to any nation who eventually becomes a “victim” of Trump’s electoral ambitions.

The United States moved its embassy in Israel from Tel Aviv to Jerusalem in 2018 after recognizing Jerusalem as its capital in December 2017. Trump’s historic decision was met with strong condemnation at a United Nations emergency resolution session, declaring Trump’s Jerusalem status as “null” and “void.” Although Belgrade was one of 128 countries to vote in favor of the UN resolution, President Vucic addressed AIPAC’s Policy Conference in March to announce Serbia’s intentions of opening an “official state office” in Jerusalem. This accord requires Serbia to move its embassy by July 2021.

Serbia and Kosovo’s willingness to develop relations with Israel will not go unpunished. As both countries seek EU membership, the decision to move their embassies to Jerusalem would be a direct blow to Brussels. EU policy views any embassy move to Jerusalem as hindering the Israeli-Palestinian peace process’s advancement and unilaterally risks inflaming violence in the region. Despite the EU’s grumbling, the agreement is an opportunity for Belgrade and Pristina to point out European mismanagement of the Kosovo dialogue.

Ensuring a peaceful and prosperous Balkan peninsula is indeed in America’s best interests.

As the Balkans are destabilized by Russia and China, the EU is again turning a blind eye to their security. Their previous unwillingness to stop the Kosovo conflict only ended when America decided to intervene. Love it or hate it, the Trump administration’s advancing security in the Balkans is a step in the right direction.

Ivana Stradner is a Jeane Kirkpatrick fellow at the American Enterprise Institute. Allison Schwartz is the communications assistant for AEI’s Foreign and Defense Policy department.