How to End the Ukraine Nightmare 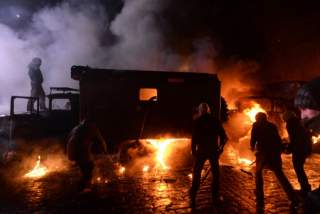 The catastrophic downing in eastern Ukraine of a Malaysian civilian aircraft on July 17, by rebels firing a sophisticated surface-to-air missile, will heighten international pressure on Russia to stop backing armed rebels in eastern Ukraine. This, and improved governance in the region, are prerequisites for ending the conflict and stabilizing Ukraine.

Media reports say one of the aircraft's black boxes was spirited away by the rebels and sent to Moscow. If so, the International Civil Aviation Organization, or ICAO, should demand that Moscow promptly hand it over. ICAO cybersecurity experts must verify the integrity of the black box against tampering.

This tragedy brings to mind the downing of KAL 007 in 1983 after it strayed into airspace in the Soviet Far East. The Soviets initially denied responsibility until irrefutable proof undermined their claim. They then averred that the aircraft was on an espionage mission. The international community was outraged.

Some in the United States called for breaking off cooperative ties in key areas that had been carefully built up with the USSR despite the Cold War. President Ronald Reagan and Secretary of State George Shultz were more prudent. They carried the day with the argument that the punishment should fit the crime. It was against civil aviation, and so ICAO and individual countries levied penalties mainly in that sphere. This left Presidents Reagan and George H.W. Bush the flexibility later to pursue negotiations that eased the end of the Cold War and the largely peaceful dissolution of the USSR.

President Obama clarified today that it was “not possible for these separatists to function the way they’re functioning . . . without sophisticated equipment and sophisticated training, and that is coming from Russia.” This underlines the central role that Moscow must play in resolving the crisis.

The KAL downing was a singular event in an extended Cold War, whereas the latest tragedy occurred amid a nasty conflict in which people are dying. The Western response must take account of the broad context of how best to end the bloody conflict in eastern Ukraine.

On Wednesday, President Obama announced expanded sanctions on Russia in response to its aid to the separatists. In light of the shootdown, the West is likely to strengthen and expand sanctions even further. Europe must accept that it will have to pay an economic price.

Of equal or greater importance, the West must do more to assist Ukraine to change the correlation of forces on the ground. A shift in the balance of power will be required to achieve a negotiated settlement that restores the territorial integrity of Ukraine and ends the fighting.

Providing effective economic and security support to Ukraine will require the West to devote more resources. Peace will not come cheap.

Western aid will bring lasting benefit, however, only if Ukraine sustains bold security and economic reforms. The new government of President Petro Poroshenko is weathering the immediate storm, but he must take more personal ownership of reforms to liberalize the economy. A new, more representative parliament will be vital to bringing peace in Ukraine and building wider, sustained support for reforms. Elections for the new parliament ought to be held later this year.

The new tragedy, a humanitarian disaster, can bring at least some good if it helps spur an end to fighting and a stronger commitment by all stakeholders to a more democratic and prosperous future for Ukraine.