How Federal Agents Could Gain Access to Your Personal Emails 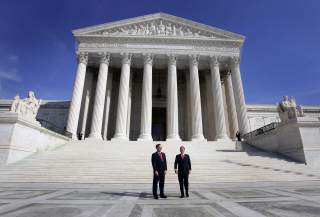 This spring the U.S. Supreme Court will weigh-in on a complicated search warrant case affecting anyone who uses email. The case involves an attempt by the Department of Justice to compel Microsoft to turn over emails the company stores on its cloud servers in Ireland.

The technicalities involved are enough to give anyone a headache. So, here’s the simplified story: The federal government believes that emails on Microsoft’s server in Ireland can be subject to a U.S. search warrant. Microsoft argues that such an understanding of the law undermines privacy, would jeopardize the company’s ability to protect the privacy of its data in the United States from foreign search warrants, violates international law and U.S. statutes. Put simply, if Microsoft must comply with a U.S. search warrant for material that is physically in Ireland, then how can Microsoft refuse to comply with a search warrant from China, Russia, or Pakistan when they seek information to prosecute dissidents in their countries?

Microsoft correctly argues in its brief to the U.S. Supreme Court that the Electronic Communications Privacy Act of 1986 (ECPA) “protects communications sent electronically and stored by a service provider, treating them like communications sent by post and stored in locked drawers.” If Microsoft managed safety deposit boxes in Ireland, a U.S. search warrant could not compel the company to ship its contents to the United States. Neither the language nor the spirit of the 1986 law seems to allow the government to compel Microsoft to cough up data on its servers in another country. As an amicus brief from a group of international law scholars noted, the demand of the federal government in this case is “is a plain violation of international law, no different than if FBI agents set foot on Irish soil to retrieve the data themselves.”

Congress has not overhauled ECPA and has not seriously revisited the issue of electronic communications and search warrants for thirty years. In 1986, Congress could not imagine a world of internet communications, websites, social media, texting and the like. It is clearly time for Congress to step-up to the plate and deal with these issues.

DOJ provides no textual evidence or records from Congress to support its claim that the law is on its side, but warns, occasionally with some hysteria, that without court intervention to reinterpret the law, criminals may go free.

However, a scenario like that is unlikely. Our Mutual Legal Assistance Treaty with the Irish government has in the past allowed DOJ to effectively issue search warrants and gather evidence. Other countries have similarly worked with the United States on law-enforcement projects involving critical issues like terrorism, child pornography and human trafficking. This process might be slower than the DOJ would like, but it works, and works well.

The Second Circuit Court of Appeals ruled in favor of Microsoft. In doing so it recognized the dangers to privacy and to e-commerce posed by the government’s position. It also recognized the universally-accepted understanding that the laws of one nation rarely extend beyond its borders, and only do so when statutes explicitly create that extraterritorial jurisdiction. Stored electronic communications—our pictures, emails and other messages—have never been subject to a search warrant if they are stored outside the United States.

Whatever the court decides, Congress needs to act to clarify these complicated issues. This requires hearings, investigations and reports from experts. Congress needs to consider what a rule in favor of Trump administration’s position will do to our massive communications industry. Will a company like Microsoft or Google be compelled to spin off its foreign operations—completely separating them from U.S. operations? Will U.S. companies simply lose significant market share to European companies, which are protected by stronger privacy laws? Will the nature of private communications be altered, putting the government in a better position to snoop into private lives?

The underlying case involves drug dealers, and no one stands up to cheer for such criminals. But the larger issue involves personal privacy, political liberty for dissidents from repressive countries, and important commercial interests. The case also involves the separation of powers in a democracy. The court has often been a leader in protecting liberty from oppressive laws and in striking down legislation that denied rights to those who had no political clout to protect themselves. School desegregation is the most famous example of this. But here DOJ wants the court to take liberty away from people, not to expand it.

The support of Microsoft’s position is unprecedented. There are amicus briefs from the civil liberties organizations, like the Brennan Center for Justice and the ACLU, the very conservative Washington Legal Foundation, and Human Rights Watch, which on the international level exposes wrongdoing without regard to the politics of the right or the left. Legislators from all over Europe have joined Republican Sen. Orin Hatch and Democratic Sen. Christopher Coons is support the result in the Second Circuit. Trade groups from Europe are signing on with Microsoft’s competitors, like Google, Cisco and Apple, to resist the overreaching of the Trump administration in this case.

The court should resist an activist stance regarding an issue that belongs to Congress, which requires serious investigation, and carefully crafted language to protect liberty and strengthen law enforcement. Hopefully the court will do this, and send the issue back to Congress, where it belongs.

Dr. Paul Finkelman, the president of Gratz College in greater Philadelphia, is a historian and former law professor. His most recent book Supreme Injustice: Slavery in the Nation’s Highest Court, was published by Harvard University Press in January 2018.