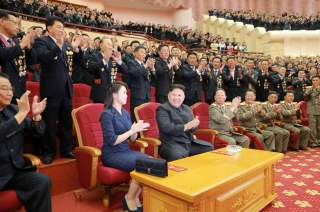 North Korea has the initiative. It is now firing rockets over the Japanese home islands and has seemingly tested a hydrogen bomb weapon. It seems little can be done with diplomacy, economic sanctions and military threats having proved ineffective. Acceptance of North Korea’s nuclear rocket forces is now urged even as worries about North Korea pushing on to develop an operational road-mobile, thermonuclear-armed, long-range rocket force grow. With this, North Korean actions might well grow even more erratic and worrying but stopping them will be very, very difficult.

There are some options that might impose penalties that actually worry North Korea and its long-term ally and protector, China. Beijing has tolerated indirect assistance being given by Chinese companies to North Korea’s nuclear and rocket developments, taking a relaxed altitude to sanctions enforcement. China seems to see some gains in destabilizing the Northeast Asia region, potentially splitting the U.S. alliance with South Korea and using North Korea as a proxy to threaten Japan.

North Korea and China appear to be on a roll. They will only change their deliberately chosen path if the cost of continuing towards building a long-range nuclear tipped rocket force exceeds the perceived benefits. There are potentially some ways to do this.

Firstly, during the Cold War the United States shared thermonuclear weapons with Germany, Belgium, Italy, the Netherlands and Turkey. This aimed to give Europe a means to defend itself when technological developments meant the American homeland became within range of Soviet long-range missiles. Without sharing it was feared America would not risk nuclear attack in a crisis and so the Soviets could drive a wedge in the U.S.-European alliance. That scenario is playing itself out again in Northeast Asia. Japan and North Korea might be left isolated if North Korea can blackmail America from providing military assistance in time of crisis because of fear of nuclear attack.

South Koreans are becoming increasingly worried about being abandoned by the United States or becoming trapped in a war America starts without consultation. Nuclear sharing addresses both aspects: providing a stronger guarantee of support and an assurance any new Korean war will happen only with South Korean approval. The United States had nuclear weapons in South Korea during the Cold War but withdrew them in 1991 when threats eased. Informal discussion has turned to returning them, but the South Korean alliance is now more equal—and needs to be seen as so—making nuclear sharing more appropriate.

Nuclear sharing might also go some way towards limiting the strategic damage caused if America withdraws from its free trade agreement. Such a withdrawal will negatively impact the South Korean alliance at a time of great strain, giving Beijing a ‘free kick’ and raising concerns that perhaps China really is the wave of the future. Nuclear sharing would counter China’s victory somewhat, help sustain America’s regional standing and hopefully prevent the possibility of a sudden unraveling of America’s alliances and partnerships across East Asia.

Secondly, the United States needs to vigorously and aggressively take up on China’s proposal to freeze North Korea’s nuclear program in exchange for suspending large scale U.S.-South Korean military exercises. This could be agreed to providing North Korea surrenders its current twenty (maybe sixty?) nuclear weapons and destroys its long-range missiles. As part of the bargain, intrusive inspections and unconstrained reconnaissance overflights could be agreed. There is a recent precedent to show such disarmament methods works—Iraq was disarmed in the 1990s as the 2003 occupation revealed.

Such a step would be a significant win for China, who would be then seen as a major regional player actually able to deliver favorable security outcomes, rather than simply acting as a self-centered spoiler. The regional standing of China would be markedly enhanced. Even so, America and South Korea would always be able to reverse the agreement and return to large-scale exercises if North Korean provocations resumed. The significant boost to regional security gained through the intrusive containment of North Korea would be a considerable achievement for all.

Thirdly, regime change has had a bad press since the 2003 Iraq War but there are other approaches. Kim Jong-un is less the head of the North Korean Communist Party than an absolute monarch. Indeed, the party mandates only the Kim dynasty can rule. Kings, however, can be overthrown from within. Palace coups have a long history.

External countries can begin a campaign to persuade the North Koreans to change leaders. This is not seeking regime change in the sense that the Communist Party falls but rather simply that Kim Jong-un falls. Secretary of State Rex Tillerson ruled out causing regime change but not seeking a change of ruler.

The incentive for Kim Jong-un is that the external actions to have him overthrown from within will only cease if the nuclear rocket program is abandoned. At the moment he believes getting nuclear-armed rockets weapons will ensure his survival. The trick is to convince him that getting nuclear rockets will seal his doom.

There are many ways external nations can reach the North Korean elite and populace ranging from television and radio broadcasts to high-flying drones dropping leaflets across the country. The point is not necessarily to succeed as much as convince Kim Jong-un it could.

Stalinist regimes like North Korea are inherently paranoid (as Kim murdering his brother nicely illustrates). An external program can simply nominate various members of the elite as future potential leaders to create substantial ongoing distrust and uncertainty. This regime change approach leverages off the intrinsic paranoia of Kim and his close supporters. China clearly has such a scheme in readiness as their hosting Kim’s brother in Beijing reveals.

The palace coup option plays to China’s biggest fear that North Korea might suddenly collapse with large scale turbulence on its border and consequent sizeable refugee flows. Like convincing Kim Jong-un that his survival depends on abandoning his nuclear rocket plans, so China also needs to be convinced that a North Korean collapse might occur unless such plans finish. China would have a strong incentive to push Kim Jong-un towards changing his nuclear and rocket plans. A palace coup option leverages off and exploits Chinese fears as much as it does Kim Jong-un’s anxieties.

Dr. Peter Layton is a Visiting Fellow at the Griffith Asia Institute at Griffith University.

Image: North Korean leader Kim Jong Un claps during a celebration for nuclear scientists and engineers who contributed to a hydrogen bomb test, in this undated photo released by North Korea's Korean Central News Agency (KCNA) in Pyongyang on September 10, 2017. KCNA via REUTERS