How France Could Change the Counterterrorism Game 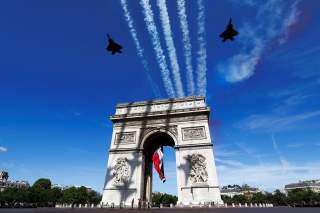 On September 5, French defense minister Florence Parly announced that France would begin arming its fleet of MQ-9 remotely piloted aircraft (RPA) which, thus far, have been used exclusively for reconnaissance and intelligence gathering missions. France’s decision to include kinetic strike as part of its RPA mission set stems from repeated requests by its senior officers and pilots in western Africa. While conducting counterterrorism operations along vast stretches of the Sahel as part of Operation Barkhane, these officials have become increasingly frustrated with the abundance of missed targeting opportunities from a lengthy kill-chain process. The arming of French MQ-9s will make France dramatically more efficient and lethal in its counterterrorism operations while presenting the United States with an opportunity that, though ripe with challenges, could reduce America’s global burden in combating terrorism.

The French-American unmanned aerial vehicle (UAV) alliance began in 2013 when the United States approved France’s request to purchase twelve MQ-9 Reaper aircraft to support their growing counterterrorism campaign. The purchase plan delivered four initial aircraft in 2014 with another two in late 2016. None of these initial six aircraft were outfitted to carry munitions. The final six MQ-9s will be delivered armed with Hellfire munitions sometime in 2019. There is a strong possibility that France’s current MQ-9 arsenal will be retrofitted to carry munitions in 2020, possibly with European air-to-ground munitions. This means that France is still at least fifteen months away from having an armed UAV in its possession. Barring U.S. congressional pushback, when the final six MQ-9s are delivered in 2019, France will join the United Kingdom, Germany, Italy and ten other countries who have been or are in the process of arming their UAVs. The newly armed aircraft will arrive in the country of Niger, where five of France’s six MQ-9s currently operate (the others remain in France).

Impacts for the French

In western Africa, France quickly found itself confronting a fundamental problem in counterterrorism operations: finding a way to shorten the time required to complete the kill chain of find, fix and finish. Compressing this timeline facilitates both increased strike opportunities (by being ready to strike sooner before a target can change their pattern of behavior) while simultaneously reducing collateral damage (by creating more time to conduct the strike at a time and place of one’s choosing). To accomplish these three tasks, France has been using two separate aircraft: an MQ-9 acting in a sensor role to find and fix (track) the target and a Rafale fighter jet in a shooter role to strike (finish) the target. Like all fighter jets, the Rafale has a limited range and loiter time relative to an unmanned aircraft. Therefore, the Rafale must sit on alert and scramble once a target has been positively identified, often taking hours and multiple refuels along the way to reach the MQ-9’s location. This tactic carries with it both inefficiencies and unnecessary risk.

By separating the sensor-shooter roles in this equation, France leaves the window open for any number of variables to disrupt the strike before the Rafale can reach the target with the MQ-9 overhead: weather could move into the area, the target could move into an area of high-collateral concerns, an aircraft system on either aircraft could malfunction while the jet is inbound, etc. The tyranny of distance that Africa presents (the east and west boundaries of Operation Barkhane is equidistant from Boston to Los Angeles) only exacerbates this dilemma. Putting air-to-ground missiles on the MQ-9 fundamentally changes this equation by combining the sensor-shooter roles onto a single aircraft. By keeping the finish option directly overhead the target set, France changes the game. With an ability to loiter armed for hours overhead, a missile-equipped MQ-9 increases the number of strike opportunities, expands the lethal range of operations, reduces the monetary cost to prosecute a target and minimizes risk to French pilots. Concurrently, collateral damage is significantly diminished by giving the French more control over where and when the strike will take place. The window of opportunity the French need to remove a terrorist from the battlefield will be significantly smaller than what it is today. With the arming of its MQ-9 RPAs, France can more decisively use air power to devastate the terrorist networks within the Sahel.

Although France’s decision to arm its MQ-9 RPAs brings with it incredible tactical efficiencies, it also bears with it a political and cultural concerns that France must now work to mitigate. The French have wrestled with the idea of arming their RPAs long before Minister Parly’s announcement. In June 2015, Jean-Baptiste Jeangène Vilmer, a French philosopher and lawyer, wrote a paper titled “When France Arms Its Drones.” He argued for France to take the next step and weaponize its MQ-9s, but not before setting definitive policy on their use and clearly articulating this policy to the French public. Vilmer is well aware of the common misconceptions and moral dilemmas the United States has faced in its proliferation of RPAs, particularly in a strike capacity. France will face similar public perception challenges and misnomers moving forward. Minister Parly anticipated some of these concerns already when she stated in her speech that arming the MQ-9 RPAs wouldn’t make them “killer drones” and that the French rules of engagement, international law and laws of armed conflict would apply just as they do for Caesar artillery, cruise missiles and Rafale fighter jets.

Challenges and Opportunities for the United States

The United States Air Force pioneered armed RPA operations and has been using them in counterterrorism operations for well over a decade. France’s decision to follow this same path creates an opportunity for the United States to strengthen its relationship with a key ally against global jihad.

Kinetic strike from an MQ-9 is far from the autonomous, button-pushing exercise portrayed in Hollywood movies and misconstrued by the general public. It involves highly precise techniques and tactics that have been hard-won through many failures and honed through robust training programs. The use of weapons off of RPAs are the most precise military means of employing force at a distance, and provide the greatest degree of ethical oversight relative to any other means of force application in combat. By sharing lessons learned and best practices in the art of kinetic strike, we can both build ally counterterrorism capacities and further strengthen our relationship with our French partners.

Integration is a Key Challenge

When France receives delivery of its first armed MQ-9 in Niger, it will conduct operations in an area where it has both familiarity and open airspace. Its initial strikes will most likely be conducted organically with a single MQ-9 completing the entire kill-chain on its own. This, of course, will make the French a much more lethal partner in the fight against terrorism. However, the flat open desert and sparsely populated skies of the Sahel are radically different from the environments of Operations Inherent Resolve and even Freedom Sentinel. Therefore, one of the most crucial challenges going forward for both the United States and France in the use of armed UAVs against terrorist networks will be their willingness to integrate.

The United States faced a similar challenge a few years ago when the British began flying their MQ-9s in support of counterterrorism operations in the Middle East. To combat disintegrated operations and unnecessary friction, the UK. elected to place liaison officers within the USAF’s operational RPA wings and the instructional schoolhouse. These placements have paid dividends many times over; the Royal Air Force and U.S. Air Force have successfully shared tactics, techniques and procedures (TTPs), lessons learned and operational insights. The French would be wise to consider a similar investment.

As the information age continues to transform warfare, it will remain an imperative for both the French and the United States to prioritize the connection and sharing of information between its armed RPAs. Data is the air that information warfare breathes. Getting inside a terrorist network’s decision loop requires both intelligence and targeting information to flow uninterrupted between “nodes.” This can only occur if both French and U.S. military leaders are willing to break down self-imposed artificial information silos and vector software and hardware development along paths that facilitate interconnectivity.

Operation Barkhane has acted as a forcing function for France to establish its rules of engagement and counterterrorism policy for kinetic strikes. Minister Parly has said she has no intention to change policy moving forward, simply the vehicle through which kinetic effects are applied. In other words, MQ-9s will target terrorists operating under the same parameters and restrictions that Rafale jets have. This may be viable policy for Operation Barkhane (although I believe these rules of engagement will get a second look once the French experience firsthand the accuracy and minimized collateral effects of the Hellfire munition), but if France chooses to expand its counterterrorism efforts into regions where the United States already has a presence, both countries will be forced to contend with questions that have both tactical and political consequences.