How France Defeated the Islamic Empire—1,300 Years Ago 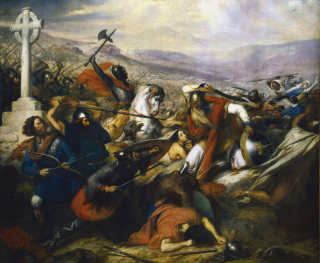 When the ISIS terrorists murdered 130 victims in Paris, they did so in the name of history. ISIS—the Islamic State of Iraq and Syria—seeks to recreate the medieval Islamic caliphate that once stretched from Spain to Baghdad. And so they attacked France, which they perceive as yet another Western obstacle to their grand ambitions.

But before they took on France, perhaps they should have studied their history better. They would have learned that it was the French who stopped the Islamic empire from overrunning western Europe 1,300 years.

In 732 CE, at the height of the Dark Ages after the fall of Rome, Islam seemed unstoppable. Boiling out of the Arabian desert just a century before, the Muslim armies conquered North Africa, Spain, the Caucasus and the Middle East with astonishing speed in what must have seemed like a medieval blitzkrieg. The tough, bold and highly motivated desert warriors plundered the decaying corpses of the ancient empires: the Roman, the Byzantine and the Sassanid (Persian). And as the victorious armies of the Umayyad Caliphate surged out of the Iberian peninsula into southern and then central France, they must have savored the prospect of adding the Christian lands of western Europe to their domains. If they accomplished that, the Islamic empire might have become the superpower of its day, the medieval equivalent in military and economic power of the modern United States.

But they had not reckoned with the Franks, a Germanic-speaking people who took advantage of the decaying Roman Empire to settle in France and Belgium (and as you can guess, from whom the name "France" derives). It was the Franks who stopped the Islamic empire's advance at the Battle of Tours, a city in the middle of modern-day France.

As with many medieval battles, hard numbers and facts are scarce. It appears that Abdul Rahman al-Ghafiqi, governor of Muslim-occupied Spain, entered southern France with perhaps 80,000 soldiers to extend the domains of the Islamic empire, and perhaps more important in that era, plunder the rich Gallic countryside (a practice that ISIS continues today).

The Muslim forces were composed of Moorish (Arab and Berber) light cavalry "who fought from horseback, depending on bravery and religious fervor to make up for their lack of armor or archery, " writes historian Paul Davis in his book 100 Decisive Battles: From Ancient Times to the Present. "Instead, the Moors fought with scimitars and lances. Their standard method of fighting was to engage in mass cavalry charges, depending on numbers and courage to overwhelm any enemy; it was a tactic that had carried them thousands of miles and defeated dozens of opponents. Their weakness was that all they could do was attack; they had no training or even concept of defense."

Facing the Umayyad army was an army of possibly 30,000 Franks led by Charles Martel, who confronted the invaders near Tours. The Frankish way of war was the antithesis of their opponents. "The Franks were hardy soldiers that armed themselves as heavy infantry, wearing some armor and fighting mainly with swords and axes," Davis writes.

Does this sound familiar? A heavily armed and armored Western army versus lightly armed but more mobile Arab troops? In some ways, Tours was a precursor to the fighting we have seen in Iraq and Afghanistan, and the sort of tactics that ISIS has successfully used today.

But this time, those mobile tactics didn't work. Islamic cavalry repeatedly charged the Frankish lines, but the Franks held firm against the lightly armed Moorish horsemen. More significantly, one Arab chronicler of the battle wrote that fear for their plundered loot induced the Muslim army to retreat: "But many of the Moslems were fearful for the safety of the spoil which they had stored in their tents, and a false cry arose in their ranks that some of the enemy were plundering the camp; whereupon several squadrons of the Moslem horsemen rode off to protect their tents."

The Islamic army returned home, their dreams of glory and wealth unfulfilled. But the consequences were far more momentous than lost plunder. "Had the Moslems been victorious in the battle near Tours, it is difficult to suppose what population in Western Europe could have organized to resist them," Davis writes. By the nineteenth century, the Western empires had carved up the Muslim world; had the Battle of Tours turned out differently, ISIS could be ruling the Western world.

This is not to glory in Frankish victory; Christian Europe showed neither mercy nor morality when it terrorized, murdered and pillaged its way to Jerusalem during the Crusades 400 years later.

However, the fact remains that the westward expansion of the Islamic empire had been halted. The caliphate had been defeated by the French.

Something that ISIS would do well to remember.