How French Racehorses Are to Blame for U.S. Partisan Politics 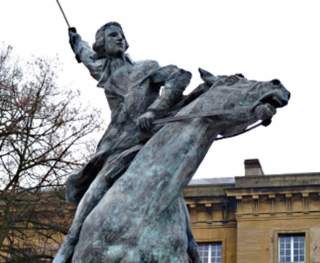 Why is America so divided? Politics in the United States has never been more polarized in the modern era than right now. An analysis of voting patterns recently published in PLoS ONE shows that Republicans in Congress have veered further right in recent decades, and Democrats further left, resulting in no real ideological overlap today. Worse, the divisiveness is not just among politicians. Around half of Democratic and Republican voters say that members of the other party make them feel “afraid,” according to a new Pew Research Center survey. As the November election nears, 2016 in America seems unique, even ahistorical, in its disunity. The country is not about to plunge into another civil war, but hyper-partisanship has nonetheless led each side to cluster together tightly and hunker down, eschewing the other side as much as possible.

As summer galloped into fall in 1789 the Baron de Gauville was having a rough time. He was just shy of forty years old and his world was crashing down around him. It was the early days of the French Revolution, well before the Terror and the incessant snip of the guillotine. But with that violence still in the unknowable future, June, July and August of 1789 must have even at that early date seemed unthinkably catastrophic for a member of the French nobility.

It had all begun innocently enough. In May, Gauville had been called to the palatial grounds of Versailles with the other deputies of the Estates-General, a gathering which had not taken place in 175 years. The assembly had been tasked with advising the king on the crown’s finances and the country’s regional unrest following several years of unwise spending and poor harvests.

Once at Versailles, the deputies were led in a formal procession into the reconfigured hall of the Menus Plaisirs, which had previously been a storage room for the sets and props for the king’s amusements, such as the opera. As a nobleman, a member of the Second Estate, Gauville sat on King Louis XVI’s left, across from the Clerical or First Estate on the king’s right. The commoners, the Third Estate, were at the very back of the hall, separated by a railing from the king and the First and Second Estates. It was all very ordered and proper.

In the weeks that followed that order broke down. On June 17 the Estates-General was rechristened the National Assembly. On June 20, locked out of the Menus Plaisirs, the deputies congregated in a jeu de paume court to swear an oath not to separate until a written constitution has been agreed on for France. Days later Gauville, against his will, entered the reopened assembly hall where the Third Estate—already joined by some rogue members of the First and Second Estates—had begun to upend the Ancien Régime. The rules, privileges and orders that had defined the country for generations were abolished. On the night of August 4, for example, the deputies renounced an unprecedented number of privileges and exemptions that had been fixtures of French society—including feudalism, which was to be dismantled in its “entirety.” When all was said and done, the written-out list of what the privileged orders had lost on that single night ran to more than forty pages. Many other thorny issues, such as whether the king would be granted a legislative veto, were still being passionately debated.

All of these issues weighed on Gauville, as evidenced by his journal entries, but by late August something more immediate was bothering him. He needed a place to sit. The deputies were no longer satisfied with the original seat arrangement. He also noticed that something unusual was happening in the assembly hall.

“On [August] 29th, we began to get to know each other: those who were attached to their religion and to the king confined themselves to the right of the president, in order to avoid the shouts, the remarks and the indecencies that were happening in the opposing party. There were about one hundred and fifty members of the clergy, as many nobles, and eighty from the Third Estate. I tried numerous times to sit in the different parts of the room and to not adopt the marked spaces, with the aim of being more the master of my opinion, but I was obliged to completely abandon the party on the left, where I was condemned to always vote on my own and, as a consequence, was condemned to the boos from the galleries.”

Gauville was among those deputies dismayed at the vaunted ambitions of the assembly’s more revolutionary members. He and the others favoring a conservation of the king’s powers and of their own privileges had, amid the legislative rancor, found it necessary to huddle together to the right of the president on one side of the hall. There was strength, or at least commiseration, in numbers. Naturally, the more revolutionary members then took the left.

Here is where left and right as a political division first took on meaning in politics. This distinction, its classification based on the layout of the room itself, has filtered down the generations and crossed the Atlantic. One can even hear echoes of the 1789 division between left and right in the modern American version that divides between liberals and conservatives, Democrats and Republicans. As Oxford lecturer Sudhir Hazareesingh explains in his new book How the French Think,

“The Revolution did not merely provide the Left and the Right with historical starting points, however: it also supplied their doctrines and counter-doctrines. Central to the mindset of the Left was a belief in the possibility of redesigning political institutions to create a better, more humane society whose members were freed from material and moral oppression. . . . The Right initially rejected this entire philosophy.”

Then, as now, the left sought rapid change to governing institutions and to society, while the right sought continuity of institutions and traditions. Hazareesingh adds, “In times of crisis—and to many conservatives it seemed crisis was the defining feature of modernity—the Right was predominantly concerned with the preservation (or restoration) of social stability.” In contrast, he writes, “The rhetoric of the Left was universalistic, appealing to general principles and resting on a conscious sense of superiority.”

So it still is today. Yet this strange new political division might easily have ended at Versailles in August 1789, becoming a not particularly important footnote in history. After all, even as Gauville was struggling with where to sit, the assembly was preparing to move to Paris. Who could know how the deputies would arrange themselves in the new setting?

Upon moving to Paris in October 1789 the National Assembly first set up in the ordination hall adjoining Notre Dame Cathedral. It was a disaster. The room was too small, and on October 26 the wooden balcony built for spectators to watch the proceedings collapsed. A new site was sorely needed. So, on November 9, the National Assembly moved to a building on the grounds of the Tuileries Palace called the Manège. The assembly would stay there for the next several years. The Manège was, prior to its reconfiguration as the assembly’s permanent meeting hall, an indoor equestrian riding arena—the only site in Paris available and big enough to hold more than twelve hundred people. The horses were herded out and the deputies were herded in.

But the riding arena was not like the airy hall the deputies had enjoyed at Versailles. Paris was by then a crowded city of more than six hundred thousand. Space was scarce, and the site that was available came with its own imperfections and oddities.

On November 10, the day after the assembly first met in the Manège, the Journal de Paris described the reconfigured site as “a very long and narrow square.” It was this architectural feature, the room’s cramped width and its expansive length—intended, first, for its equine occupants—that would unexpectedly reshape politics for the next two centuries and more, all the way to the present. As historian Timothy Tackett explains,

“The Assembly’s architect had done his best to transform the long and narrow indoor riding arena into a viable hall. . . . The rectangle was entirely divided in the middle by the president and the secretaries, on one side, and by the speaker’s podium, on the other. Thus, the structure of the hall compelled everyone to sit either on the left or on the right: a physical reality that invariably contributed to the polarization of the Assembly.”

It was here, where earlier the king’s horses had pranced back and forth, that left and right as political concepts became fixed. It was the physical layout of the hall that helped solidify this political division. By December, deputies addressed not just the “right side” and the “left side” of the hall but simply the “right” and the “left.” Newspapers reporting on the assembly began adopting this terminology as well.