How Friedrich Engels’ Predictions for World War I Came True 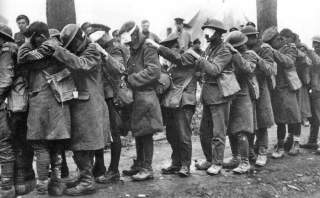 Virtually all of Europe’s statesmen and military leaders failed to anticipate the nature, duration and effects of World War I in the run-up to that great calamity. They also had only a vague idea of the factors that could lead to such a war. Given these failures, it is all the more interesting that the German political theorist Friedrich Engels managed to make a number of accurate forecasts about WWI. Engels based his forecasts on an analysis of the trends that had developed in the system of world politics after the Franco-Prussian War from 1870–71. He also took into account developments in European military affairs.

Engels was a serious author who covered various fields of the social sciences. He paid a great deal of attention to the development of arms and military equipment, conducting a number of very interesting studies in this field. However, it goes without saying that Engels’ predictions about the future were influenced by an ideological agenda, which inevitably affected certain elements of his foresight. But as it turned out, it was the most ideological parts of his forecasts that did not materialize.

In a January 7, 1888 letter to his colleague Friedrich Sorge, Engels made ​​the following conclusion about the nature of the future war, which he presciently referred to as a global war: “Finally, no war is any longer possible for Prussia-Germany except a world war and a world war indeed of an extent and violence hitherto undreamt of.”

Engels wrote that the size of the armed forces of the warring parties would be huge, much larger than they were during the previous wars in Europe. “Eight to ten million soldiers will massacre one another and in doing so devour the whole of Europe until they have stripped it barer than any swarm of locusts has ever done.” Engels also wrote vividly about the devastating effects of this would-be global war:

“The devastations of the Thirty Years’ War compressed into three or four years, and spread over the whole Continent; famine, pestilence, general demoralization both of the armies and of the mass of the people produced by acute distress; hopeless confusion of our artificial machinery in trade, industry and credit.”

This forecast by Engels materialized fully in the Russian Empire. After its very costly participation in the First World War, Russia sank into a fratricidal and exceptionally destructive civil war from 1918 to 1922.

In the same letter, Engels elaborated on his assessment of the prospects of the ongoing class struggle in Europe: “A war would throw us back for years.” He noted that “chauvinism would swamp everything, for it would be a fight for existence.” Engels further noted that

“Germany would put about five million armed men into the field, or ten per cent of the population, the others about four to five per cent, Russia relatively less. But there would be from ten to fifteen million combatants. I should like to see how they are to be fed; it would be devastation like the Thirty Years’ War. And no quick decision could be arrived at, despite the colossal fighting forces.”

When justifying his forecast, Engels gave a highly positive assessment of the military preparations that France had carried out after its defeat in the Franco-Prussian War. In particular, he wrote: “France is protected on the north-eastern and south-eastern frontiers by very extensive fortifications and the new constructions in Paris are a model.”

Engels also warned that Germany would not be able to defeat Russia with one blow (in a strategy reminiscent of the one implemented by Helmuth von Moltke the Elder during the Prussian-Austrian war of 1866 and the Franco-Prussian War): “Russia cannot be taken by storm.” Engels predicted that one result of the protracted European war would be the strengthening of the United States in relation to the European powers:

“If the war was fought out to the end without internal disturbances a state of exhaustion would supervene such as Europe has not experienced for two hundred years. American industry would then conquer all along the line.”

However, Engels drew an excessively radical conclusion from his assessment that American industries would benefit from the war. He believed that the Americans “would force us all up against the alternatives: either retrogression to nothing but agriculture for home consumption or—social transformation.”

Engels wrote the following when assessing the situation in 1888: “I imagine, therefore, that the plan is not to push things to extremities, to more than a sham war.” However, he then added perspicaciously: “But once the first shot is fired, control ceases, the horse can take the bit between its teeth.” That “first shot” was fired by Bosnian Serb Gavrilo Princip to kill Archduke Franz Ferdinand of Austria in Sarajevo on June 28, 1914.

Engels proved to be very accurate in his assessment of the political consequences of the war for a number of the major participant states. He wrote the following in his December 15, 1887 introduction to a pamphlet written by Sigismund Borkheim:

“All of this will be ending in general bankruptcy; collapse of the old states and their traditional state wisdom to such an extent that crowns will roll by dozens on the pavement and there will be nobody to pick them up; absolute impossibility of foreseeing how it will all end and who will come out of the struggle as victor.”

Indeed, as we know, WWI resulted in the collapse of several empires and monarchies—Russian, German, Austro-Hungarian and Ottoman. Engels only erred in predicting that there would be no one to raise the “fallen crowns.”

Engels wrote further in the same introduction, which bears the distinctive characteristics of an op-ed piece, that an arms race with its epicenter in Europe was going to be one of the causes of the future world war:

“This is the prospect when the system of mutual outbidding in armaments, taken to the final extreme, at last bears its inevitable fruits. . . . This, my lords, princes and statesmen, is where in your wisdom you have brought old Europe.”

Today it is obvious that Engels’s prediction about the scale of Europe’s devastation in the upcoming war was not wholly accurate. Sacrifices made by the European countries were huge, but Western Europe (at least the victorious countries) recovered relatively quickly. The postwar situation was more complicated in Germany and especially in Russia.

The devastating world war eventually led to the emergence of an extremely chauvinistic and racist Nazi regime in Germany, which initiated an even more destructive and cruel war—World War II. The First World War also led to the ascent of radical left-wing Social Democrats (or Bolsheviks) headed by Vladimir Lenin in Russia. The Bolsheviks initially dreamed of “a world socialist revolution,” but then settled for a more modest goal of building socialism in one country. Attempts to achieve this goal led to significant losses of human life in the course of the notorious Stalinist repressions. At the same time, the formidable industrial base and powerful armed forces that the Soviet Union had built by 1941 played a decisive role in attainment of victory by the anti-Hitler coalition in World War II.

Andrei Kokoshin is the Dean of the Faculty of World Politics of the Moscow State University.