How to Get More Money from Congress: Declare an Emergency 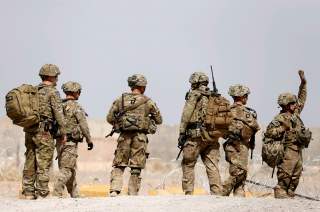 The Trump administration wants Congress to add $5.9 billion in “emergency” spending to the Pentagon’s 2018 budget. Most of the request would go toward boosting funding for missile defense in the name of stopping North Korean missiles. Smaller slices would pay to add troops to the war in Afghanistan and to repair two Navy ships damaged in accidents. To these requests, Congress should demand offsets.

While the increase in defense spending might be popular in Congress, designating the funds as “emergency” requirements would exempt the money from budget caps Congress imposed on itself in 2011 to control the nation’s burgeoning debt—now at $20 trillion.

That means that instead of forcing tradeoffs among Pentagon programs, the measure becomes a slush fund that soaks future taxpayers. Worse, by using the emergency designation for activities that aren’t truly related to war or emergencies, the request threatens to destroy the cap and open fiscal floodgates. Doing so while cutting taxes could make the current national debt look mild.

North Korea isn’t attacking the United States, and U.S. missiles defenses were designed with North Korea missiles in mind. Even if they work well, these investments would have little short-term impact. As for the ships, though no accident is ever anticipated, mishaps that damage military platforms in service are inevitable. The war cost increase for the new troops in Afghanistan, meanwhile, would be minor absent the military’s bad habit of funding military personnel through the war account. Those 3,500 troops would still be in the military if they weren’t deployed, so their full cost is not truly a war cost.

Nor is the request due to a funding shortfall. Congress has not passed regular appropriations for the 2018 fiscal year, which started October 1. But the Pentagon, like other agencies, is funded by a continuing resolution until December, which keeps funds at about at last year’s level. That leaves the war accounts flush, since Congress last year repeatedly increased the Overseas Contingency Operations (OCO) funding them, from an initially planned $59 billion to $83 billion.

Meanwhile, the two houses have a deal on the 2018 defense authorization bill, which envisions defense spending increasing 10 percent to $634 billion, plus $66 billion for OCO. That includes a 4 percent increase in missile defense to $8.5 billion.

That total spending authorized is unlikely to be appropriated, however. The 2011 Budget Control Act, which was designed to limit debt, caps the non-war part of the 2018 defense budget at $549 billion. Under the law, that $84 billion excess would be sequestered—taken proportionately from all Pentagon accounts—to keep spending at the cap level.

Given that, you might expect the Trump administration to focus on a deal raising or eliminating the caps, as has been suggested by both the president and secretary of defense. But the administration must know that given recent history and the debt’s growth, any deal would fall short of the increase Congress is pushing. They seem to have taken advantage of events to push for a few uncapped bucks for their favorite programs.

First, it lets the Pentagon avoid sensible tradeoffs among weapons and missions. With $600 billion plus, the Pentagon has many ways to find $6 billion if it’s vital. According to the Department’s new Cost of War report, that was around the cost of U.S. wars last June. $6 billion buys eleven or twelve littoral combat ships and less than half of a Ford-class aircraft carrier. Another base realignment and closure round (BRAC) would likely save $6 billion in three or four years.

The Pentagon has dodged difficult choices for so long that it’s forgotten how to make them. The implementation of defense caps and budget drop-off in 2013 forced some limited economies, but Congress loosened the restrictions before much reform occurred. A series of budget deals raised the annual caps, usually by $10-20 billion a year, while using chimerical future savings to maintain a pretense of fiscal disciple. And Congress, with the White House and Pentagon’s cooperation, annually moved tens of billions into OCO accounts. These are always for an “emergency” and thus uncapped, and now half non-war spending.

So the Pentagon has escaped the discipline that its projected budgets seemed to require. That means it hasn’t sufficiently tightened its belt by controlling requirements and reducing command staff, pushed Congress hard enough to make relatively easy reforms, like another BRAC, or begged Presidents for the prioritization among missions that is the essence of strategy.

The other problem is fiscal; not the $6 billion itself so much as what it would portend. Through Obama’s budget deals with the GOP, the Pentagon began to receive OCO funds designated for non-war purposes. By asking Congress to call additional defense funds “emergency” spending, the administration is going a step further to normalize cap evasion.

Pentagon boosters will ask, why stop at a few billion? A recent article in Defense One proposes the declaration of a “readiness emergency” allowing a “significant increase in emergency spending, even if there is no direct connection to ongoing wars.” Under that scheme, would any portion of the Pentagon not declare itself unready to escape budget discipline?

The rationale for that proposal, like most recent calls for defense spending increases, is that funds do not match forces, producing strain. But higher spending isn’t the only solution. Why not unburden our military by eliminating its many missions disconnected from U.S. security? It’s easy to improve readiness when resources are not diverted to unnecessary activities or those allies would ably perform if we didn’t.

Emergencies end when they become predictable. After that, they are just a label used by beneficiaries of emergency procedures to preserve them. As long as emergency spending seems free, it won’t be spent with care. It boosts Pentagon spending a bit and hurts military strategy more. It confuses priorities and encourages debt, and it makes war seem easier than it should.