How India Can Stop the Next Fake-Money Crisis 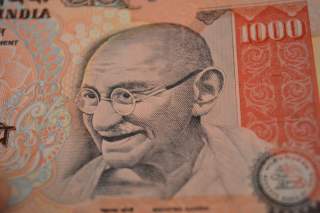 The Indian government’s recent decision to invalidate five-hundred- and one-thousand-rupee notes is a reflection of growing concerns about the widespread circulation of counterfeit currency notes in the predominantly cash-based Indian domestic economy. Data collected by the Indian Statistical Institute revealed that as many as 250 out of every million notes in circulation were fake. This may seem a small percentage, but in absolute terms it translates into mind-boggling numbers. The Indian media’s clamor over the politically exciting issue of black money is understandable, but it undermines the threat posed by counterfeit currency—both to monetary stability and to the internal security of the country. It was not surprising that the official notification by the ministry of finance, which regulates the production and circulation of Indian legal tender, categorically underlined that the decision to withdraw the notes was intended to curb the financing of terrorism through the proceeds from these fake notes.

India has a large unorganized, cash-based economic sector whose daily transactions number in billions of rupees. According to Boston Consulting Group, in the year 2015, 78 percent of all consumer transactions in India were cash-based. It is this large cash-based sector that was inundated with the circulation of counterfeit currency notes. The question is how big this circulation really is, and how such criminal activity, traditionally undertaken for economic gain by private individuals, organized gangs and crime syndicates, managed to erode common consumers’ faith in Indian legal tender.

Between 2010 and 2013, Indian law-enforcement agencies seized $150 million in counterfeit currency. The counterfeiting of high-denomination Indian legal tender is not an ordinary criminal activity; it is a well-orchestrated, state-sponsored enterprise, intended to adversely impact India’s economic security. It amounts to terrorism by other means.

In India, counterfeiting is performed by a large and well laid-out network of intermediaries. These intermediaries are not only located within Indian territory, but have woven an extensive web in neighboring countries like Nepal, Bangladesh and Sri Lanka. They use these locations as staging posts for pumping counterfeit currency into Indian territory through the porous border. Many Pakistani nationals have been arrested with huge amounts of Indian counterfeit in these countries.

David Headley, who is currently serving a sentence in the United States for his role in the Mumbai terror attacks, confessed before a Chicago court that a major of Pakistan’s ISI had provided him with counterfeit Indian currency to cover his various reconnaissance trips to India. Headley admitted that because of the high quality of the counterfeit, he never encountered any problem using the bills in India. It did not surprise Headley that Pakistani state actors were involved in the counterfeiting of Indian currency.

In the late 1990s and early 2000s, the United States faced a similar problem, in the form of counterfeit “superdollars,” which were illegally produced by North Korea and then pumped into the United States through shadowy banks and individual smugglers. A 2009 Congressional Research Service report, “North Korean Counterfeiting of U.S Currency,” admitted that high-quality counterfeit hundred-dollar bills had the ability to erode public confidence in U.S. legal tender. No wonder that many stores in the United States during that period simply refused to accept hundred-dollar bills.

The Indian government, for its part, has been trying to address this problem through a combination of legal indictments and diplomatic measures. India increased its diplomatic tempo after 2014, when Indian investigating agencies received a judicial conviction in a crucial transnational case of counterfeiting, where investigators armed with scientific evidence were able to nail down the role of Pakistan’s state agencies in the production of Indian counterfeit.

The sophistication of the counterfeiting, and the use of genuine currency paper, clearly suggested the involvement of state actors. Moreover, the counterfeit currency successfully imitated certain high-quality, cost-intensive security features of genuine Indian currency. Such features as a guilloché pattern in the background design, asymmetric see-through registration and latent image effects can only be incorporated using standard currency-making machines. These making machines are highly capital-intensive, and are sold only to sovereign governments and their central banks. There is only a handful of manufacturers for these currency-making machines in the world.

The clinching evidence for Indian investigators came when a Committee of Experts, set up to look into counterfeit forensics, opined that “all the batches of counterfeit currency notes which were seized by law enforcement agencies from different parts of the country, not only had a common source but based on their printing defects these were printed in the same currency printing press.” The earliest batch of these counterfeits dated back to 2000, when counterfeits five-hundred-rupee notes amounting to half a million Indian rupees (approximately $9,000) were recovered from the bodies of two Pakistani terrorists who were gunned down near the international border in Jammu and Kashmir.

The findings of the investigation were also taken to the Financial Action Task Force, an intergovernmental body set up to combat money laundering and terrorist financing.

The Indian government needs to build upon this move with a multipronged strategy against counterfeiting by changing the cost/benefit calculus of decisionmakers in Islamabad. The strategy must involve both increasing costs and reducing benefits, in order to make the entire enterprise prohibitive. The present step of invalidating high-denomination notes would render millions of counterfeit notes as paper scrap. A few years ago, the Indian government amended its counterterror legislation and brought the circulation of high-quality counterfeit currency under the ambit of a “terrorist act.”

It is also imperative to ensure that the new notes have high counterfeiting costs. The invalidated five-hundred- and one-thousand-rupee notes had strong covert features, but it was the imitation of their overt features that dented their credibility. The new legal tender needs to have robust overt security features. Covert features are important, but these come into play only at the bank level, when the currency has already been circulated in the market. Effective counterfeit-resistant overt security features would make it easier for lay consumers to differentiate between genuine and counterfeit currency, thereby making counterfeiting a less profitable venture.

Sajid Farid Shapoo is a highly decorated Indian Police Service officer at the rank of Inspector General (two star general equivalent) with 18 years of progressively senior experience in sensitive and high profile assignments across India. He is currently pursuing a Master’s in International Affairs from Columbia University, New York.