How the International Order Discriminates Against Israel 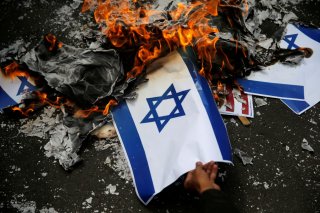 At the heart of the Israeli-Palestinian conflict lies the question, who is the victim and who is the oppressor? While this flawed analytical framework leaves little room for nuance and historical truths, it is this structural worldview that is driving anti-Semitism in liberal and progressive political circles across the Western world. But, in a rules-based international order system, where most states are inclined and strive to abide by international law, little evidence supports the claim that Israel has transformed itself into the biblical Goliath.

While it retains aerial, terrestrial, and naval military superiority over its neighbors, Israel continues to lack the same rights that are granted to sovereign states in the international system—including the right to exercise its own sovereignty, the right to practice self-defense, and the right to be criticized without being held to a double and unique standard. Seventy-three years after coming into existence, the world’s only Jewish state continues to fight for the legitimacy that has been bestowed unto every other nation upon its acquisition of sovereignty.

Among a state’s right to exercise its own sovereignty is its right to determine its own capital city. When Germany, for example, saw the Berlin Wall fall in 1989, the Bundestag conducted a vote that sought to determine whether Bonn or Berlin would become the new national capital. In 1997, Kazakhstan’s President Nursultan Nazarbayev moved the national capital to the city of Astana and in 1991, Nigeria moved its capital from the city of Lagos to the city of Abuja. When Israel’s Knesset moved to pass the 1980 Basic Law, which established the City of Jerusalem as the state’s capital, the United Nations Security Council’s (UNSC) response was the passing of resolution 478; it called on all member states of the United Nations to withdraw their missions from Jerusalem in protest. While customary international law’s principle of uti possidetis juris dictates that Israel is entitled to inherit the boundaries of the Mandate of Palestine in May of 1948 and thus legitimizes Israel’s full control of Jerusalem, most states in the international system continue to abide by UNSC’s Resolution 478.

Regarding Israel’s denied right to practice self-defense, one must look no further than the recent Operation Guardian of the Walls in May of 2021. Over the course of twelve days, Hamas and Palestinian Islamic Jihad indiscriminately fired over 4,000 rockets into southern and central Israel from Gaza. Schools, community centers, and hospitals all came under fire and a total of ten Israeli civilians were killed. Instead of reaffirming Israel’s right to self-defense under Article 51 of the United Nations Charter, the UNSC conflated terrorist violence in Gaza to the Israel Defense Forces, and Secretary-General Antonio Guterres demanded an end to the “utterly appalling violence.” This weak and insubstantial statement was made only after Israel issued a military response to the thousands of rockets fired at civilian areas, showing a clear failure by the UNSC to support Israel’s sovereign right to self-defense. Such practice is inconsistent with the treatment other states have received by the institution—resolutions by the UNSC have condemned terror attacks by Al Qaeda in Kenya, by Al-Shabaab in Somalia, and by the Islamic State of Iraq and Syria in Turkey, France, and Egypt. Thus, it seems that the only institution that is granted the powers to authorize the use of force under international law insists on treating the Jewish state as a sui generis case, by which its right to self-defense remains a controversial matter.

Lastly, is Israel’s right to enjoy the same standard for international critique as every other sovereign state—no other institution within the United Nations displays the double standard imposed on the world’s only Jewish state as does the Human Rights Council (HRC). With Israel being the only country listed on the Council’s permanent agenda, the obsessive fixation on the Jewish state is virtually indisputable. As pointed out by the non-governmental organization UN Watch:

Israel is the only country subjected to an investigatory mandate that examines the actions of only one side, presumes those actions to be violations, and which is not subject to regular review.

This unique double standard is also observable in the number of resolutions published by the HRC against Israel vis-à-vis the world’s most egregious human rights violators. From 2006-2021, the Human Rights Council condemned Israel with ninety resolutions while the Islamic Republic of Iran, where homosexuals are publicly executed and dissidents are imprisoned and killed by the state, received ten. Within the same time period, China, a state that deported nearly 1 million Uyghur Muslims to concentration camps, received zero condemnations and Pakistan, where the government continues to look the other way as women are subjected to female mutilation, received zero condemnations as well.

In the rules-based international order system created after the conclusion of World War II, Israel remains excluded and discriminated against. While every state in the international system shares its own imperfections, Israel’s are the only ones used to question the state’s right to exist. Despite the Jewish state’s contribution to massive human rights advances in the Middle East, despite the humanitarian assistance offered to countries around the world that suffer from natural disasters, and despite the vibrant and arduous commitment to abide by international law even as genocidal, anti-Semitic terror organizations around its borders seek the state’s demise—Israel continues to be treated as a pariah state. Since 1948, Israel has not transformed into a Goliath, but it remains the same, stubborn, brave, and resilient David.