How Iran Is Skirting Sanctions in the Southern Caucasus 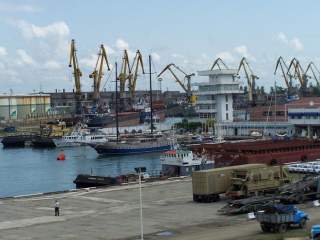 Proxies and agents, merchants and middlemen, peddlers and enablers of the Iranian regime have been scouring the globe for years in search of ways to evade U.S. sanctions and help Iran acquire nuclear weapons.  Georgia, a small post-Soviet republic in the Southern Caucasus, located less than a thousand miles from Tehran, appears to have become a critical conduit for Iran’s efforts to buy nuclear technology. Unless Western governments pay more attention to Iranian efforts in Georgia to defy the international community, Tehran will continue to elude export restrictions and bypass sanctions through the Southern Caucasus.

Georgia came to the attention of U.S. authorities last year after three Iranian businessmen took control of a small banking institution in Tbilisi, Georgia’s capital, and used it to facilitate banking transactions for sanctioned Iranian entities. Alongside the bank, they opened money exchange businesses, an airline, and a slew of other companies mainly based in Tbilisi and along Georgia’s Black Sea coast.

Eventually, in February 2014, the U.S. Department of Treasury sanctioned the three individuals and a number of their businesses, both in Georgia and overseas. Georgian authorities also took action. Tbilisi reportedly froze more than a hundred accounts of Iranian nationals and their companies, many of which were incorporated in the Black Sea Poti Free Industrial Zone. Georgia’s Central Bank imposed strict oversight over the bank, after the three sanctioned Iranians had relinquished their 70 percent stake. Georgian authorities also took the bold step of revoking a visa-free regime in place since 2011, which had made it too easy for Iranian nationals to visit Georgia and establish businesses there.

With that case ostensibly closed and other illicit finance challenges to address around the globe, U.S. authorities shifted their gaze elsewhere. Iran, on the other hand, hasn’t given up on Georgia.

It is easy to see why. With its access to Western markets through its Black Sea ports, Georgia is an ideal conduit for Iranian procurement. Its geographic proximity makes it convenient. As the contested terrain for the ambitions of Turkey, Russia and Persia, Georgia offers both historic familiarity and compelling reasons for a regionally ascendant Iran to establish a foothold in the area. And as a potential energy and trade corridor between east and west that could bypass both Russia and Iran, the South Caucasus is too important strategically to let others rule over it.

Accordingly, the three sanctioned businessmen have not entirely vanished from the scene. According to an Iranian businessman familiar with their activities, they are trying to recover their lost assets. Their associates are still in Tbilisi, and at least one of their sanctioned entities resumed business under a new name – though now with Georgian formal ownership and management.

Beyond this, there are hundreds of other Iranian companies active in Georgia, many of which appear ideal for the purposes of sanction evasion. This includes shipping companies, trading houses, petrochemical import-exports, aviation businesses, and financial service providers. While not all of them engage in illicit activities, it is clear that many have links to sanctioned Iranian entities.

Commercial registry documents show that senior officials associated with Iranian sanctioned entities have opened businesses in Georgia. One of them is Behrouz Dolatzadeh, an Iranian employed by the U.S. sanctioned company Setad Ejraiye Farmane Hazrate Emam, or EIKO, the Supreme Leader’s holding company. Dolatzadeh established a business in Istanbul and one in Tbilisi in January 2012, both under the name of Blue Sky General Trading. A few weeks later, he was arrested in a sting operation in Prague, in the Czech Republic, as he tried to buy U.S. made assault rifles for Iran’s military. His initial conviction was eventually overturned by a Czech Court for entrapment. In December 2013, a Reuters’ expose revealed his links to Setad.

While Dolatzadeh registered his business in Tbilisi, others gravitated to the Poti Free Industrial Zone (FIZ), next to the Black Sea container terminal of Poti. The Free Zone was inaugurated in November 2010. The FIZ is a tax-free gateway to the new Silk Road – a fast-developing trade corridor linking the Black Sea to Central Asia. The FIZ is linked to Poti’s container terminal by a four mile railway link.

Most companies registered at the FIZ are trading houses that use the FIZ as a transshipment point. According to one FIZ executive, of 166 companies currently active there, only six are industrial projects.  Most of what the remaining companies buy is resold to buyers outside of Georgia. They use the FIZ for custom clearance purposes and to produce new paperwork before the merchandise moves on to another foreign destination. And their revenue is tax-free.

The closure of 90 companies since late 2013 due to banking irregularities – including a handful linked to the three Iranian nationals hit by U.S. Treasury sanctions in February of this year – has not deterred an Iranian presence.

Of the 166 companies currently registered, Iranian nationals own 84, or 52.5 percent. There are also 9 companies created by Iranians who use passports acquired through a citizenship-by-investment program from the island nation of St Kitts and Nevis – the same citizenship used by the three sanctioned individuals to register most of their companies. Together, over 60 percent of Poti Free Zone registered entities can be traced back to Iranian ownership.

There is even a support network for these businesses. Farsi-speaking business incorporation services promoting the Free Zone are located nearby, in the southern Georgian port of Batumi, to help Iranians establish a foothold on the Black Sea. Consulting firms that promote Iranian investment in Georgia, as well as help Iranian nationals acquire a foreign passport, are also for hire.

Iranian interest in Poti is best explained by the 10,000 trucks that yearly transit Georgia between the shores of the Black Sea and the border crossings in Armenia and Azerbaijan. Trains also transport containers from Poti to Baku – whence merchandise can then easily reach Iran through the Caspian Sea. And now with Iran increasing transit fees for Turkish trucks and Turkey retaliating, much of that traffic is being rerouted to Georgia. Tehran is vigorously promoting bilateral ties, through its large diplomatic mission in Tbilisi and a consulate in Batumi, an embassy-managed school in the capital, exchange programs for Georgian students in local universities, and a branch of Ahl-ul Bayit, the religious foundation affiliated with Iran’s Supreme Leader.

Nor has the end of the visa-free regime significantly diminished Iranian business activities. Though Iranian businessmen admit that banking remains difficult, Iranian companies can keep business operations going by remote control from Tehran or through proxies. For example, Dolatzadeh’ s company in Tbilisi is owned by another company in Istanbul. A visit to the Istanbul company offices revealed that it is actually a residential property rented to two Cameroonian citizens who, according to local management, have not paid rent for six months and have not been seen for weeks.

For Dolatzadeh and many others, Georgia appears to be an excellent, cost-effective jurisdiction to channel financial transactions between Europe and Asia, or even procure nuclear technology. It is close to Iran, and it is far from the prying eyes of Western capitals and their intelligence services. And nobody seems to be paying attention.

Emanuele Ottolenghi is a Senior Fellow at the Foundation for Defense of Democracies in Washington DC. He recently spent two weeks in the South Caucasus investigating Iran’s illicit financing and proliferation activities there.