How Iraq's Most Senior Cleric Became a Major Power Broker 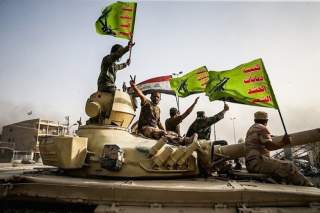 It is no secret that Ayatollah Ali al-Sistani, Iraq’s premier Shia authority, altered his role as a strictly religious figure and dove head-on into the country’s politics after the U.S. invasion. But as of late, Sistani is finding himself as an arbiter not only of the Shia-Sunni divide, but also as an attempted peacemaker in what is becoming a violent crisis among the Shia themselves.

Iraq’s government is listening to him, primarily because, as the ayatollah and his aides continually point out in the midst of increasing chaos, the Shia-led government of Prime Minister Haider al-Abadi cannot protect the majority-Shia population, nor end the internal rifts. The weak Iraqi state and military recently demonstrated it is unable to protect the Shia from Islamic State. The renegade Shia militias (Popular Mobilization Forces) backed by Iran—which, for the most part, maintain their allegiance to Iran’s Islamic Revolutionary Guards—have shown their allegiances lie elsewhere, even though some are working alongside the Iraqi state.

Sistani’s increasing role in politics, and that of the clerical establishment in general, is a good indication that Iraqi society will continue to become more religious, although it is unlikely to end up with the form of governance of Iran’s theocracy, where the head of state is an appointed ayatollah.

The deadliest single bombing in Iraq, in thirteen years of war, took place on July 2, in the Baghdad district of Karrada, a commercial district on the east bank of the Tigris River, and was claimed by ISIS. However, the tensions that the bombing created evolved into a Shia-against-Shia struggle, and political leaders accused the government of failing to protect Shia-dominated areas from ISIS.

Sistani made his views known immediately after the attack. His spokesman, Ahmed al-Safi, said after Friday prayers: “What happened in Karrada is the result of the absence of a government vision, rampant corruption, lack of professionalism and the lack of structure in establishing fundamental changes to the intelligence and security apparatuses while tolerating the presence of corrupt losers at the expense of civilian lives.”

The political conflict among Shia political forces dates back many years—specifically, to the era of disagreement over the second term of former prime minister Nuri al-Maliki, who sowed deep sectarian divisions within Iraq and implemented policies of institutionalized marginalization against the minority Sunni population. In 2009, the National Iraqi Alliance, a group comprised of mostly Shia political parties, was formed to compete in national elections. Over time, Maliki’s administration created conflict among the Shia as well, until Iranian supreme leader Ali Khamenei, who also wields power in Iraq, stepped in and demanded Maliki’s removal from power.

Commenting on the recent internal Shia divisions, analyst Yahya al-Kubaisi said in an interview on June 25 with Radio Sawa, an Arabic-language radio broadcasting network that is funded by the U.S. government: “This conflict shows that we are facing two visions of Shia state administration. The first current is the extremist right, represented by Maliki and his allies, as well as some military forces that emerged from within the Popular Mobilization Forces. The second current is that of Shia rationality, which is led by Abadi.” According to Kubaisi, a consultant with the Iraq Center for Strategic Studies, other Shia groups who are part of this rationality are supported by Sistani.

In another interview with Alhurra, the television network funded by the U.S. government, Kubaisi said the Shia national coalition “is experiencing deep divisions that make it difficult to talk about the existence of a (Shia) national alliance at all.”

The clerical establishment officially tries to downplay Sistani’s direct role in Iraqi politics—regardless of whether he is involved in Shia-Sunni conflicts or the increasing intra-Shia dispute. During a visit to Najaf, Iraq, the seat of Iraq’s clerics and Sistani’s home, numerous religious scholars told me that Sistani intervenes only out of “expediency” (maslaha), in which Islamic law is overridden in order to serve the common good or public welfare. However, such an explanation understates the complex web within Shia politics, where Sistani is front and center. In one of his most significant political interventions since the 2003 invasion, Sistani in June 2015 issued a fatwa calling for Shia and Sunnis to form militias (the Popular Mobilization Forces) to combat ISIS. He said the fatwa was necessary because the Iraqi military was ill equipped to protect Iraq’s Shia population. ISIS considers the Shia a heretical sect and has carried out massive killings of Shia communities in Iraq and Syria.

Nearly all those who answered Sistani’s call were Shia, and it is some of these militias that are now aligned with Iran’s Islamic Revolutionary Guards; Sistani, meanwhile, opposes the guards and Iran’s strong intervention in Iraq’s politics and military apparatus. He also opposes Iran’s form of theocratic governance—the velayat-e faqih—because although he has become directly involved in state affairs, he believes that an appointed ayatollah running a state is anathema to the Shia tradition, which historically has viewed political power as religiously illegitimate. Iran’s form of governance since the 1979 Islamic revolution, then, is a radical historical departure from the Shia tradition. Sistani is also believed to be at odds with Supreme Leader Khamenei due to Iran’s interventions in Arab countries.

Sistani has also refused to join in Iran’s regional interventions, whether involving Hezbollah, the powerful Iran-backed militia and party in Lebanon, or the Shia backing of the Houthi militias in Yemen, or even Iran and Hezbollah’s funding and military support to keep Syria’s President Bashar al-Assad in power.

As he continues to try to safeguard Iraqis from their government—which he has declared as corrupt and inept—and from Iran’s deepening footprint, the eighty-six-year-old Sistani may be charting a new course for Iraq’s clerical establishment. But it is clear that, with Iran plotting his replacement, and the weakening of the Iraqi state, the clerics he will leave behind will be vulnerable without him.

Geneive Abdo is a non-resident senior fellow at the Rafik Hariri Center for the Middle East at the Atlantic Council and the author of the forthcoming book, The New Sectarianism: The Arab Uprisings and the Rebirth of the Shi’a–Sunni Divide, to be published in December by Oxford University Press. Fatim-Zohra al Maliki, a researcher at the Atlantic Council, contributed to this article.