How ISIS Is Ripping Turkey Apart 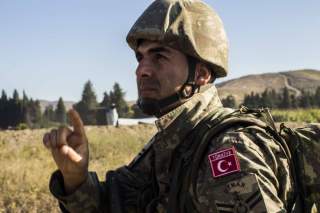 On June 28, three suicide bombers armed with AK-47s attacked Istanbul’s Ataturk International Airport, the eleventh-busiest airport in the world. The terrorists killed more than forty people, leaving more than 200 wounded. The attack, presumed to be carried out by ISIS operatives, reveals alarming operational and tactical sophistication, especially considering the fact that Ataturk International Airport has been known to have a very tight security apparatus, which was recently reinforced in the wake of terrorist attacks in Belgium’s Zaventem airport.

Different from most airports of its size, Ataturk Airport has two, not one, security checkpoints, the additional one guarding the very entrance to the main terminal building. Regardless, the terrorists behaved like a special forces unit and carried out a three-stage attack. The first bomb went off in the parking lot and served as a distraction for the security forces in the second (outer) checkpoint. This allowed the second attacker to blow himself up right in front of the outer checkpoint. The third attacker then exploited the very physical breach and chaos created by the second explosion to advance into the “safe zone,” shooting his way deep into the terminal, only to be shot by a member of the airport’s security establishment before he had the opportunity to inflict more damage. As can be seen in a video taken from the airport’s surveillance system, the wounded terrorist then went on to explode his suicide vest before reaching a more crowded section of the terminal, which most likely limited the number of casualties.

The level of sophistication displayed by the terrorists in Istanbul should serve as a cautionary tale for all of us. The terrorists are diligently studying the soft targets, aiming to exploit their weaknesses where they find them. At Ataturk International Airport, the security forces focused on making sure that the potential attackers never made it to the planes, which then created choke points where a great number of people had to wait in the outer checkpoint, vulnerable to suicide bombers and/or shooters. The terrorists exploited this vulnerability and ended up wreaking havoc in one of the most guarded airports in the world. Moving ahead, we should start thinking about airport security in a more comprehensive fashion. The attacks of September 11 sensitized us about securing the planes. The attacks in Belgium and Istanbul, in turn, should make us think harder about how we can secure not only the planes, but also the airports, which remain high profile and vulnerable targets for terrorist groups like ISIS.

The recent attack in Istanbul reveals not only the level of sophistication professed by ISIS operatives at the operational and tactical level, but also their deep understanding of the multi-faceted political crisis in Turkey. Put simply, the attacks attributed to ISIS during the course of the past year suggest that the group has studied the very fabric of Turkish politics diligently and has been targeting critical vulnerabilities in order to destabilize the entire country. So far, ISIS has been doing a terrific job at straining the existing tensions in the country, pushing it further toward what may be called as the “Turkish Winter.”

Making sense of the causes, conduct, and consequences of ISIS attacks in Turkey, in turn, is possible only by answering three questions: 1) Why is ISIS refraining from claiming responsibility for attacks attributed to the group?; 2) Why is ISIS targeting Turkey?; 3) What is ISIS “really” hitting in Turkey?

The first question is easiest to answer but still important to understand what ISIS is trying to accomplish. While there are at least seven bombings attributed to ISIS since January 2015 (including the recent attack), the group tended to refrain from claiming direct responsibility. However, there are at least two reasons to think that ISIS is behind the said attacks, including the one targeting Ataturk Airport.

First, there are only two organizations that are capable of carrying out such attacks in Turkey—ISIS and the Kurdish militant group PKK—and PKK tends to pick its targets usually from the Turkish state’s security apparatus. While PKK and its affiliates have shown a very high threshold for accepting collateral damage defined in terms of civilian casualties (which was the case in a suicide bombing in Ankara this March that claimed the lives of thirty-seven), they also refrain from hitting targets that would attract criticism and backlash from the Western world, especially at a time when PKK’s involvement in the struggle against ISIS through its Syrian affiliate YPG has partially “whitewashed” its image as a terrorist group (US and the EU formally define PKK as a terrorist group). ISIS, on the other hand, thrives on not only hitting soft targets, but also the kind of negative bad press from the West that PKK is trying to avoid.

Second, ISIS strategically refuses to claim direct responsibility when it believes the “uncertainty” about the perpetrators’ identity can fuel intra-communal strife and tensions. We can trace this approach all the way back to ISIS’s founding father, Abu Musab al-Zarqawi. It is almost unanimously accepted that Zarqawi was behind the bombing of al-Askari mosque in Iraq in 2006, a holy shrine for the Shia. While the bombing itself killed no one, the sectarian paranoia it unleashed led to intra-communal violence that then instigated the deaths of thousands.

ISIS is employing the same method in Turkey. In October 2015, right before the November general elections, ISIS targeted a pro-Kurdish peace rally, killing 103. By not claiming responsibility, ISIS made it possible for the Kurds to blame the government and the government to blame PKK, a dynamic that then contributed to the ethnic tensions across the country. Note that ISIS does not need to do much to push different factions to the edge of paranoia. For example, a PKK affiliated group recently claimed responsibility for a mortar attack on Istanbul’s second biggest airport, Sabiha Gokcen, killing a cleaner. In such a landscape of uncertainty and conflict, all ISIS needs to do is hit the right nerve and watch different factions go at each other.

So, why is ISIS targeting Turkey? There are three main reasons. The first is the obvious one: because it can. Turkey not only shares an expansive border with the area controlled by ISIS, but it also hosts millions of refugees from the Syrian conflict, most of whom are barely documented. It is safe to assume that the lightly controlled and monitored borders attract numerous ISIS operatives. It is also commonly accepted that there might be scores of ISIS cells across the country, comprised of not only operatives from Syria but also Turkish citizens. All these make Turkey extremely vulnerable to terrorist attacks.

Second, ISIS aims to “deter” Turkey from getting more involved in the struggle against the group. This is where “timing” plays a role. Ever since Syria plunged into civil war, President Erdogan has insisted that Turkey would not accept a solution to the conflict as long as Syrian president Bashar al-Assad remained in power. Considering that the U.S.-led coalition’s objective in Syria focuses on dealing with ISIS, not necessarily removing Assad, Turkey remained reluctant to engage more deeply in the fight against ISIS. As the Assad regime “remained,” though geographically reduced, Turkey’s position and the sunk costs that came with it became a burden for Turkey, alienating the country in the international arena, even creating significant tensions with Russia. In the past months, Erdogan’s foreign-policy posture over Syria started to appear more and more flexible, implying that Turkey may play a bigger role in the fight against ISIS. Hitting Turkey hard now, in this context, would send a very strong message to Ankara: if Turkey becomes more active in the fight against ISIS, ISIS will most likely activate more of its sleeper agents in Turkey, with deadly consequences.

The third factor that makes Turkey a prime target for ISIS now is the very ethnic and political tensions within the country that have been slowly but surely climaxing in recent months. During the course of the past year, the drift between the Kurdish and Turkish citizens of the country has considerably deepened thanks to the urban warfare launched by PKK (which met with extremely heavy reaction from the Turkish security forces). The tensions between the conservative voters (roughly fifty percent of the voter base) who follow the lead of Erdogan and his Justice and Development Party (AKP) and the so-called seculars (sometimes referred to as “Kemalists,” to invoke modern Turkey’s ultra-secular founder Mustafa Kemal Ataturk) have also sky-rocketed, especially because of Erdogan’s increasingly polarizing discourse and rhetoric that pit AKP’s 50 percent support base against the “other” fifty percent that remains essentially divided. The Turkey of 2016, in so many ways, is more fractured and vulnerable in the political sphere than it has been in decades and ISIS is doing its best to exploit Turkey’s fault lines to help the country tear itself apart from within.

The fractures within the political sphere are, in fact, the answer to the question, “what exactly” is ISIS targeting in Turkey. It goes without saying that bombing attacks in Turkey hurt the Turkish economy by scaring off tourists. However, the real target for ISIS goes beyond mere economics; ISIS, during the course of the past year, is hitting the very nerve centers that exasperate the inherent political problems in the country.