How Islamic State Is Putting the Balkans on Edge 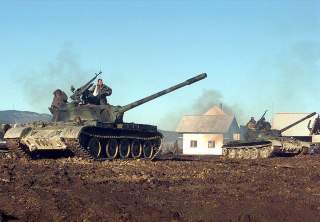 For the largely secular, moderate and west-leaning Balkan states, where religious kinship transcends borders, violent extremism is fueling fear, ethnic tribalism and seditious security agendas. And as Islamic State group fighters disband amid the siege against Mosul, the situation only promises to escalate.

In July, footage of Islamists burning Serbian flags to the tune of pro-Bosnia music and gunshots went viral. It followed the murder of a policeman in the Republika Srpska (RS) (Bosnia’s Serbian “entity”) by a lone-wolf Islamist extremist, a similar gunning down of two Bosnian soldiers in a Sarajevo suburb, and deadly clashes between officers and alleged insurgents in Macedonia last year.

A small, yet significant, domestic radical presence, flanked by returning Islamic State fighters are carrying the threat. Salafism, an ultra-conservative strand of Sunni Islam, has been nurtured in the Balkans through Saudi-sponsored preachers, mosques and madrassas ever since the 1990s when the Bosnia and Kosovo wars first lured thousands of jihadists to the defense of fellow Muslims. Poorly governed post-communist and transitions have meanwhile left a legacy of poverty, unemployment and corruption in the former Yugoslav states, which has only pushed the disillusioned further into the path of radical cells.

It’s meant the region has been a significant exporter of fighters for Islamist groups, with official sources claiming around 900 nationals—mainly from Bosnia, Kosovo and Albania—have travelled to Iraq and Syria. But as Islamic State paralyzes in the Middle East, many combatants are slated to return home—some have already done so, aided by the smokescreen of Europe’s refugee crisis. They will possess frontline skills, sharpened ideological beliefs and a desensitization to violence that will intensify and influence the Islamist movement in their homeland.

The concern now is that extremists will conduct further attacks and drive antagonism. Some may also push overtly nationalist strategies. The video in July, which was reportedly filmed in Bosnia, follows an Islamic State propaganda film last year featuring Albanian, Kosovan and Bosnian Islamists who call for Balkan Muslims to create a regional Caliphate by inciting violence on non-believers. The lone-wolf attacks in Bosnia last year and a foiled Islamic State-linked attack in Sarajevo, planned for last New Year’s Eve, also implies a broader intent to spread panic, chaos and destruction.

The magnifying fear of Islamism in turn risks reifying divisions between, and within, the region’s Muslim- and Christian-majority nations, while uniting ethnic groups across borders. The current track record of protests, hate speech and trashing of places of worship among opposing religious groups may snowball amidst the heightened perception of extremism. This happens at a time when Islamophobia is spreading in the region, fuelled by the influx of Muslim immigrants and Islamist attacks on the continent. And it only adds to the hostile ethno-nationalist legacies of the past.

The 1992 to 1995 Bosnian civil war, which brought Bosnian Serbs, Muslims and Croats into conflict, left the status of RS as a focal point of tension between the territory’s majority Orthodox Christian Serbs and minority Bosnian Muslims (or Bosniaks). In Macedonia, the 25 percent largely Muslim ethnic Albanian population have been fighting for better representation in the majority Orthodox Christian state ever since Macedonia’s 2001 armed conflict with the National Liberation Army (NLA)—an ethnic Albanian insurgency originating from Kosovo.

Divisions have in part been stirred by nationalist leaders and the media who have manipulated the Islam and terrorism narrative for their own ends. Anti-Serbia terrorist rhetoric, and the attack in RS last year, have made Serbs in the territory increasingly concerned for their safety and suspicious of Bosniak residents. And RS President Milorad Dodik—who has long held secession ambitions—has used the fear to push away from Bosnia. “Serbs do not want to live in a community where radical Islam flourishes,” he said following the flag-burning incident.

And in Macedonia, the threat of terrorism is suspected of being exploited to detract from a government wiretapping scandal and push nationalism. After a bloody shootout between policemen and a group claiming ties to the NLA in the northern Macedonian town of Kumanovo in May last year, 29 of the alleged gunmen were arrested on contentious “terrorism-related” charges. The incident was linked to radical Islam by media and social networks, while the ongoing trial has continued to stir accusations of a state cover-up with Albania calling for an international inquiry.

Discord has also been sewn by deteriorating regional security dynamics. The brewing climate of fear and inter-ethnic mistrust has meant national leaders have been unable, and unwilling, to coordinate counterterrorism activities. In effect, unilateral actions including state-led investigations and defense exercises, have risked an unnecessary amplification of tensions.

A similar overspill is possible in Macedonia. “Operation Monster” a 2012 investigation targeting the Albanian community after the murder of five ethnic Macedonians by supposed Albanian fundamentalists, led to often violent demonstrations from ethnic Albanians protesting the force of the operation. It also spurred a rallying call from the NLA, highlighting just how rapidly a single event could escalate.

The growing terrorism and ethnic tension dynamic comes when post-Yugoslav settlements are already brittle, making regional cohesion particularly vulnerable to new incidents. Last month Bosnian Serbs voted in a controversial RS referendum on its national holiday, which was deemed a violation of the civil war-ending Dayton Peace Agreement as it discriminated against Bosniaks and Croats. It was also considered a test run for an independence referendum. The Ohrid Agreement, which ended the NLA insurgency in Macedonia, is also under pressure amid slow progress in promoting ethnic Albanian rights.

With the possibility of spiraling insecurity and contagion of the terror threat to western Europe, stabilizing the region is paramount. The Balkans have already played a part in Islamist attacks on the continent: sourcing the weapons used in last November’s Paris attacks, while some attackers used the so-called Balkan route to enter Europe masquerading as migrants. And so, international support to close the net on returning fighters, bolster nascent deradicalization programs and push leaders away from divisive rhetoric is vital in limiting further incidents.

Though aid for economic, democratic and civil society reforms remain relevant to boost regional prosperity and pluralism, significant immediate investment is required to ensure internal security policies are harmonized, in order to disarm the cycle of discord that terrorism can set off. Establishing a Balkans counterterrorism body would be essential to this. Nations currently lack the trust to work together and require centralized and independent mediation to coordinate arrests, monitor borders and share intelligence across ethnically divided jurisdictions. But much remains contingent on fast action, political will and overcoming a legacy of discord.

Until then, Islamist extremism will continue to embed itself into the narratives of a torn region, embroiling state leaders into a complex and increasingly fragile policy environment. And should national bonds continue to wither—terrorism will be on hand to rub salt on open wounds.

Tej Parikh is an analyst at the Nova Europa political risk consultancy. He is also a global policy analyst and journalist, and received his masters degree from Yale University with a focus on fragile states, ethnic politics and political economy. He tweets @tejparikh90.