How Israel and Pakistan Can Avoid a Nuclear Showdown 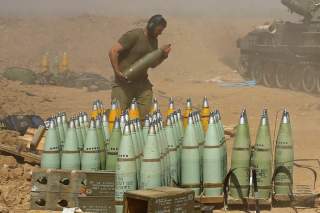 The advancement of Pakistan’s nuclear-missile capabilities and Israel’s growing military ties with India are increasing their respective military relevance for each other. In the absence of formal diplomatic relations and against the backdrop of a prevailing antagonistic public dialogue, the need for an effective and discreet channel of communication between Islamabad and Jerusalem to mitigate misunderstandings and misperceptions about each other’s intentions is growing.

A high degree of suspicion and mistrust exist between Israel and Pakistan. In particular, Pakistan seems to presume the worst about Israel. At the end of December 2016, a fake-news story triggered a nuclear Twitter confrontation between Israel and Pakistan. A website called “AWD News” claimed that Israel’s defense minister had threatened to destroy Pakistan with a nuclear attack if it sent ground troops to Syria on any pretext. Although clearly fake (the website misidentified the Israeli defense minister as Moshe Ya’alon, who resigned in the previous May), Pakistan’s defense minister hastily tweeted a nuclear threat and warned Israel that “Pakistan is a nuclear state too.”

The growing security relationship between Israel and India, serves to enhance conspiracy theories about the existence of an Indo-Israeli alliance against Pakistan. Thus, unsurprisingly the recent visit by Israel’s prime minister to India in January 2018 produced a bellicose Pakistani response. The foreign minister, Khawaja Muhammad Asif, stated that Pakistan could defend itself “despite this nexus between India and Israel” that is based on their enmity with Islam. Israeli prime minister Benjamin Netanyahu wisely reacted by stating that “We (Israel) are not enemies of Pakistan and Pakistan should not be our enemy either”.

The latest decision by the U.S. administration to suspend most of the military assistance to Pakistan has also given rise to suggestions that the United States may be part of this anti-Pakistan allegiance. The chairman of the Senate, Mian Raza Rabbani, recently warned that a nexus between the United States, Israel and India is emerging and the Muslim world needs unity to deal with that problem.

It is unclear to what extent this confrontational attitude truly represents what Pakistan’s leaders believe about Israel or to what extent they based on internal and Islamic considerations and constraints. Hussain Nadim recently claimed that among the high-ranking security personnel, politicians and diplomats “there is a high acceptance and willingness to engage with Israel”, but they refrain from doing so because of the fear of political and religious backlash.

The Significance of Israel-Indian Military Cooperation

From a military perspective, the Israeli-Indo security relationship and the modernization it brings to the Indian armed forces is understood by Pakistan to create vulnerabilities in fundamental military areas undermining the conventional balance of power in South Asia. This security relationship is perceived to have provided India with substantial advantages in the modern aspects of warfare such as: network-centric and electronic warfare capabilities; intelligence and information dominance; day and night maneuverability; long-range modern strike capabilities from the air and the sea that threaten Pakistan’s strategic sites and assets; and antiballistic missile defense systems that improve India’s ability to defend against Pakistani missiles.

To counter this, Pakistan is looking to enhance its security relationships with China and Russia. However, given its limitations in competing with India in a conventional arms race, Pakistan is working to improve the integrity of its second-strike capabilities and to develop its nuclear fighting capability to offset India’s conventional advantages.

The Development of a Potential Pakistani Nuclear Risk to Israel

While Pakistan is very attuned to Israel’s military cooperation with India, Pakistan rarely figures in the Israeli security discourse. Nevertheless, recent technological developments may potentially bring Israel within the reach of Pakistan’s nuclear-tipped missile capability. For the first time, Israel will have to face the specter of potentially being within the range of a nuclear-armed Islamic regime. This understandably will make internal and external developments in Pakistan of great interest to Israel.

Pakistan has successfully tested the Shaheen-III intermediate-range missile which has a range of approximately 2,750 km, designed to reach the Indian missile bases on the islands of Nicobar and Andaman. Depending upon the missile’s placement, it could be capable of hitting Israel. It is assumed that Pakistan has been successful in miniaturizing nuclear warheads and therefore, once fully operational, the Shaheen-III will be nuclear capable.

Having the capability to target Israel does not automatically turn Pakistan’s nuclear force into a direct threat to Israel at this time. Pakistan doesn’t overtly call for Israel’s destruction. However, this capability does constitute a risk for Israel because intentions can change rapidly and because of the vulnerabilities that exist regarding Pakistan’s stability and the effective control of its nuclear weapons.

There are a number of nightmare scenarios for Israel. These include: Pakistan’s nuclear arsenal falling into the hands of Pakistani generals with Islamic sympathies; the extension of a nuclear umbrella by a more extreme Pakistan to Arab countries in conflict with Israel; cyber vulnerability that could undermine the safeguards or the targeting integrity of Pakistan’s nuclear and missile programs; or malicious attempts to exacerbate existing perceptions of Israel as an enemy of Pakistan leading to a nuclear standoff, as exemplified by the December 2016 nuclear tweet incident.

Though the specter of a direct Pakistani nuclear threat against Israel is low, the significance of such a threat is dramatic and therefore cannot be ignored. Israel is regarded as having a secure second-strike nuclear capability which serves as a credible deterrence. In addition, it is building a multi-tier missile defense system that though not able to completely prevent Pakistani missiles from hitting Israel, would reduce the temptation for Pakistan to risk a small strike against it.

Israel needs to cooperate with other countries concerned with Pakistan’s nuclear program, especially the United States and Britain. Assessments need to be shared regarding political developments affecting Pakistan’s stability as well as technical intelligence on its nuclear capabilities. In addition, the U.S.-Israeli ballistic missile defense cooperation needs to be extended in order to cover Pakistan.

As their military relevance to each other becomes more significant, Israel-Pakistan relations are at an inflection point. Given their inability to openly engage with each other, a credible back channel of communication between Israel and Pakistan is of growing importance in order to temper possible misunderstandings, miscalculations or malicious attempts to artificially increase tensions between the two countries.

Direct unofficial contacts, including deferential public statements, meetings between diplomatic representatives in international organizations and covert intelligence cooperation, are positive but insufficient avenues of communication that need to be augmented by third-party channels. Given the developing relationships between the different parties, Saudi Arabia and Russia could serve as possible effective intermediaries between Jerusalem and Islamabad.

Shimon Arad is a retired colonel from the Israeli Defense Forces. His writings focus on regional security matters.

Image: An Israeli soldier carries a shell at a mobile artillery unit while it fires towards the Gaza Strip August 1, 2014. Israel declared a Gaza ceasefire over on Friday and killed more than 50 Palestinians in renewed shelling, saying militants had breached the truce shortly after it began and apparently captured an Israeli soldier. The 72-hour break announced by U.S. Secretary of State John Kerry and U.N. Secretary-General Ban Ki-moon was the most ambitious attempt so far to end more than three weeks of fighting, and followed mounting international alarm over a rising Palestinian civilian death toll. REUTERS/ Baz Ratner