How JFK Would Have Confronted a Rapidly Rising China 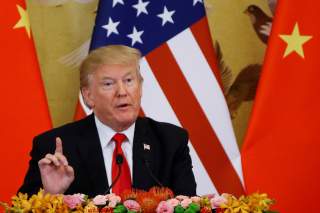 Fifty-five years ago this month, President John F. Kennedy delivered one of the most significant speeches of his career. (Both his close colleague and speechwriter Ted Sorensen and his Secretary of Defense Robert McNamara regarded it his single most important speech.) In the commencement address at American University, he declared that hereafter, the United States’ goal would be to build “a world safe for diversity.”

Say what? No, this was not about ensuring fairer representation of minority rights. It was about what the United States should require in relations with its deadliest adversary. In a feat of rhetorical jujitsu, he stood Woodrow Wilson’s call for a “world safe for democracy” on its head. More importantly, he rejected its Cold War analogue of which he had been a leading advocate. Rather than demanding that the United States bury Soviet-led Communist totalitarianism, the United States should now live and let live—in a world of diverse political systems with diametrically opposed values and ideologies. In that world, the Free World and Evil Empire could compete vigorously—but only peacefully—to demonstrate whose values and system of governance could best meet the demands of its citizens.

What led JFK to such a dramatic change of mind? The existential experience of nuclear danger. Just eight months earlier, he and his Soviet counterpart, Nikita Khrushchev, had teetered on the brink of nuclear war. He had made choices he knew could have caused the instant death of one hundred million individuals. He had internalized the insight Ronald Reagan later captured in his oft-quoted one-liner: “a nuclear war cannot be won and must therefore never be fought.”

Sobered by that experience, and looking to the road ahead, JFK proposed this phrase—a world safe for diversity—as a pointer towards a new strategic concept for America’s campaign to combat Communism.

In the missile crisis, after U.S. intelligence discovered the Soviet Union trying to sneak nuclear-tipped missiles into Cuba, Kennedy had chosen to confront the Soviet leader Khrushchev publicly. By demanding that all the weapons be withdrawn straightaway, and threatening an attack to destroy them unless Khrushchev complied, Kennedy believed, as he confided to his brother Bobby in the midst of the crisis, that he was running a one-in-three chance of nuclear war. But the alternative, which would have been to acquiesce to Khrushchev’s adventure, would in his view have meant an even higher risk of war. (In Kennedy’s assessment, had Khrushchev succeeded in Cuba, he would then have moved to seize Berlin. Berlin was at that time a free enclave located three hundred miles inside Soviet-occupied East Germany to whose defense the United States was firmly committed, even though that would have required using nuclear weapons.)

As he reflected on what had happened, Kennedy knew that he had played a version of nuclear Russian roulette. With two bullets in the six chambers of the revolver, he had put the gun to Khrushchev’s head—and his own—and pulled the trigger. Having survived, he vowed to do everything in his power to ensure that neither he nor any of his successors would ever have to do that again. And today, fifty-five years on, thankfully, they have not.

To reduce this risk, the Kennedy administration undertook a surge of initiatives that began with establishment of a hotline between the White House and the Kremlin to allow direct, immediate communication. A unilateral moratorium on atmospheric tests of nuclear weapons jump-started negotiations of a Nuclear Test Ban Treaty. A process began that ultimately concluded with the Nuclear Nonproliferation Treaty limiting the number of new nuclear-weapons states.

But while important, JFK believed that specific initiatives of this sort were not enough. If these two nuclear superpowers with diametrically opposed values were to survive, then they would also require new ideas about how determined adversaries could manage their relations without confrontations like the missile crisis. JFK never wavered in his condemnation of Communism. He never wobbled on America’s core commitment to the strategy of containment that sought to prevent Soviet Communism expanding by the use of military force. But he had begun exploring ideas about how the United States and its allies could nonetheless live with an enemy that embodied values he knew were evil.

As he states clearly in the American University speech, his main takeaway from the Cuban Missile Crisis was a categorical imperative. As he put it: “above all, while defending our vital interests, nuclear powers must avert confrontations that bring an adversary to a choice of either humiliating retreat or nuclear war.”

How were such confrontations to be averted? Not, he answered, by a “Pax Americana enforced by American weapons of war.” Not by insisting that “the leaders of the Soviet Union adopt a more enlightened attitude.” Instead, he argued that we recognize that “in the final analysis, we all inhabit this small planet. We all breathe the same air. We all cherish our children’s future. And we are all mortal.” And thus, he concluded, while “not being blind to our differences, let us also direct attention to our common interests and to the means by which those differences can be resolved. And if we cannot end now our differences, at least we can help make the world safe for diversity.”

It was a profound thought. It required embracing simultaneously two almost contradictory propositions. But over the decades that followed, two nations with fundamentally incompatible core political philosophies found ways to avoid military confrontations as they engaged in fierce but peaceful competition to show which system works best. Perhaps this offers a clue for Americans and Chinese today as we try to cope with the Thucydidean dynamic of a rapidly rising party-driven authoritarian China and a ruling democratic United States.