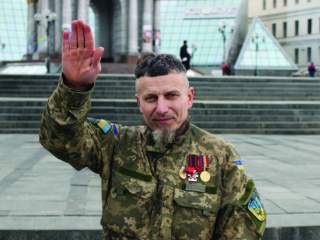 THE UKRAINIAN army was so pitiful when fighting broke out in the Donbas in April 2014 that President Petro Poroshenko had to outsource the nation’s defense to volunteers. By July, approximately fifteen thousand citizens and foreigners had joined “volunteer battalions.” There are two main types. Territorial units were raised throughout Ukraine’s twenty-four oblasts, including Donetsk and Luhansk. There’s a Lviv Battalion and a Kremenchug Company. The Dzhokhar Dudayev Battalion is made up of several hundred Chechens who arrived in August to avenge Putin’s waging of the Second Chechen War. The second type is ostensibly ideological. Sankta Maria is Orthodox Christian. Sich Battalion is ultranationalist. The distinction between the territorial and ideological units quickly became trivial. Members of the Azov Battalion, based in the eastern city of Mariupol, are reputed to be Aryan racists. But most members I met were foreigners who joined because Azov—allegedly funded by Rinat Akhmetov, a Donetsk steel tycoon—pays five hundred dollars per month. If there is a shared sense of mission among the volunteers, it may be best described as anti-Putinism. Almost every volunteer I have met this winter at the Donetsk front bears a personal grudge against him.

The battle-line in eastern Ukraine would look very different today had volunteers not answered Poroshenko’s call. Last summer, at least seven oblasts east of the Dnipro River—the strategic port of Mariupol, the industrial strongholds of Kremenchug and Dnepropetrovsk, the “second capital,” Kharkiv—nearly fell to separatists, or “se-pederasts,” as volunteers call them. The volunteer battalions were disproportionately responsible for preventing these incursions. Initially they served in defensive roles. Their potential as mobile units was soon realized by the Ukrainian high command in Kiev. Most of their members had fought in previous wars—sometimes with the Russians, sometimes against them. Volunteers were intrepid enough to traverse deep into separatist-held territory. In July the Donbas Battalion forayed seventy kilometers into the Luhansk oblast and seized the town of Popasna. The Fifth Battalion of Right Sector helped take back the villages of Karlivka and Pisky. Dnipro-1 Battalion recaptured the port of Novoazovsk from one thousand Russian regulars.

In return for submitting to the control of the regular Ukrainian army, Kiev granted around fifty volunteer battalions the right to equip themselves with offensive weaponry. Only Right Sector and the Organization of Ukrainian Nationalists refused. Battalions acquired heavy guns by way of a handful of oligarchs, who lavish their karmannaya armiya, “pocket armies,” with the best equipment hryvnias can buy. Many have antiaircraft missiles. Azov Battalion has access to a tank factory. The Dnipro-1 Battalion operates heavily armored vehicles and drones and fires Swedish-manufactured sniper rifles. I have met former drill instructors from Israel and Western Europe assisting in battalion training camps. “Soviet mentality says that when one man is killed, send in another,” an Azov Battalion member told me in Mariupol. “The Ukrainian army still thinks that way. Volunteers are trained in NATO ways—to survive.” For the last eighteen months, the volunteer battalions have served at the Donetsk-Luhansk front on a rotating basis, cycling back to their oblasts for garrison duty when not engaged in the east. Civilians who volunteer to become soldiers often spend most of their time as policemen.

RIGHT SECTOR occupies a unique place among the battalions. Its origins were neither wholly territorial nor ideological, but a blend of the two. A series of nationalist organizations and armed groups—Trident, the Ukrainian National Assembly, the Patriots of Ukraine—coalesced during the Maidan protests, with Dmitry Yarosh of Trident emerging as the leader. The group is rumored to have been funded by the Kremlin in its earliest days, but its most prominent financier today is a Jewish industrialist from Dnepropetrovsk named Igor Kolomoisky; many Ukrainians call Right Sector his personal army, though Kolomoisky himself denies any connection to the organization. Twenty-one Right Sector battalions are garrisoned throughout Ukrainian cities, with three stationed on the Donetsk front. It is also a political party, controlling one seat in the Ukrainian parliament. This party has not done a very good job explaining what Right Sector battalions are fighting for. Very few Right Sectorites I met were classically fascist, as is commonly supposed. They often spoke scornfully of Nazism and were open to nonwhites and foreigners joining the organization. Right Sector is strenuously antigay; its members like to storm pride parades with stones and batons, but so do many ordinary Ukrainians. Right Sector is ultranationalist, though most of its foreign volunteers don’t speak Ukrainian; at the front, all orders are relayed in Russian. The group’s much-flaunted obsession with Stepan Bandera—the hero of the Ukrainian Resistance who committed atrocities against Jews and Poles—is not so much a celebration of Bandera the Nazi collaborator as Bandera the Ukrainian hero suppressed by the Russian historical conscience. The nationalism of Right Sector is a bit more ecumenical than one might expect. When I asked a group of Right Sectorites in Kiev to give me a model of what they were aiming for, they cited Poland unironically: Polish nationalism, they said, was back in good health after having endured half a century of disrespect. The Right Sector narrative curiously mimics that of the separatists in eastern Ukraine: Both agree that the Donbas has never been Ukrainian in any meaningful cultural or historical way. Of course for Right Sector, the Donbas must upgrade its “Ukrainianness” if “nationalism” is to be respected, and the group has pledged to ensure this at any cost. “When we liberate villages, residents now know to bring us a list of who the separatists are,” Yarosh told a reporter last year.

In September I went to a Right Sector office in Obolon, a Kiev suburb. Earlier that week, the office had been grenaded by assailants whom Right Sector has called Russian agents. I arrived to find a queue of recruits lined up outside the office, already restored to working order. Joining Right Sector isn’t difficult. You need a cell phone and three to four weeks’ training at its camp outside Kiev, where you are taught the rudiments of street fighting; Right Sector–chartered buses run there daily. A month later I visited Right Sector’s blockade of Crimea in Kalanchak. Right Sector had set up check points along the three roads which lead into Crimea, through which over two thousand cars were passing each day. Trucks were denied entry. Each car was allowed to pass with fifty kilograms of food, one liter of alcohol and two cell phones. Thirty Right Sector units guarded each border unit. They worked in two-week shifts; Right Sector units from a different oblast would then come to replace them. The Right Sectorites were legally not permitted to wield guns—only the police and the local Kherson Battalion had permission—but they all did anyway. At any one moment, groups of Right Sector members were doing push-ups and sit-ups in a small wood yard abutting the camp. Other groups were sleeping. Others were shoveling coal into a new winter barracks.

In late November, saboteurs—possibly Right Sector members—blew up four power lines into Crimea, which has left the peninsula with spotty access to electricity ever since. Ukrainian riot police were immediately dispatched to the Crimean border, where they leveled the camp I saw at Kalanchak and pummeled a few of the Right Sector members I met there. But such confrontations between Right Sector and the state have been, on the whole, rare. Traveling through Ukraine, you could be forgiven for believing that Right Sector is not actually a paramilitary group despised by the state. Its members march in party fatigues around central Kiev and drive trucks with battalion license plates. Each Sunday there is a demonstration in Maidan where Right Sector heroes charge parents a few hryvnias to have their child learn how to grip an AK-47 that’s alleged to have been stripped from a dead separatist. The amount of weaponry the group has smuggled into different Ukrainian cities is an open secret. Western analysts believe a group like this could only operate so openly if the Ukrainian secret services allowed it to—that is to say, they must have some degree of control over Right Sector. But this claim rests on the shaky assumption that Ukraine is in complete control of its own secret services.

IN OCTOBER I travelled to the barracks of Right Sector’s Eighth Battalion. It occupies an abandoned Soviet spa resort in Yurivka, a dirt-lane, pro-Russian village thirty kilometers southwest of Mariupol. Its ninety members shared six trucks and seventeen Kalashnikovs. Like all of Right Sector’s weaponry, the group had acquired none of it legally. Some guns had been stripped from dead separatists; others had been exchanged with a local Dnipro Battalion unit in return for barrels of gasoline stolen by night from a gas station. Ammunition generally came by way of midlevel commanders in the Ukrainian Army who sympathized with Right Sector’s determination to continue the fight unabated against Donetsk.

A few weeks before my arrival, when a Danish news agency came to profile the barracks, almost everyone in the Eighth Battalion had to put on a ski mask for fear of being identified on TV. A member called Schmitt had been expelled from the Ukrainian Army for laying land mines that blew up more Ukrainians than separatists. A Chechen had three fingers missing from his right hand. He claimed they’d been lost to a misfired grenade; everyone else was convinced he’d received suicide bomber training in Dagestan. The former lobby of the resort had been renovated into a “chapel.” A pulpit was flanked by one cardboard box full of unpackaged cigarettes, another full of miniature Bibles. Ukrainian flags and standards bearing the Right Sector symbol—the trident of Ukraine formed out of two machine guns and a sword—were slung on the walls. The former hotel sauna had become the battalion jail: any Right Sector member caught drinking was locked inside for five days. The former hotel gardens had been converted into a training facility. There were tires and chains and faux door-fronts. In squads of twelve, Right Sector members learned how to seize street intersections and storm buildings. Three nights a week they were woken up without warning and taken for fourteen-kilometer reconnaissance marches. On the weekends they trained with live ammunition.