How Left and Right Are Both Blinded to Islamist Terrorism 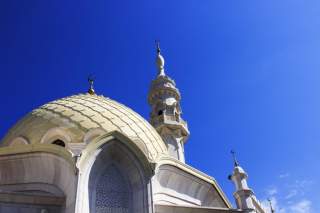 From the Iranian hostage crisis in 1979 to the recent wave of terrorist attacks in Paris, San Bernardino, Brussels, Istanbul, Orlando and now Nice, the United States and much of the democratic world has experienced attacks committed by Islamist terrorists. And as we have seen so many times in recent years, politicians on both the left and the right are either unable or unwilling to conceptualize a legitimate response to the problem.

On the right, many Republicans have shown that they understand neither the U.S. Constitution nor American values. From Ben Carson arguing that a Muslim should not be president, to Jeb Bush claiming that only Syrian Christians should be allowed into the country, to presumptive Republican nominee Donald Trump demanding a wholesale ban on Muslims crossing our borders, to Newt Gingrich demanding that Muslims in the United States be tested on whether they believe in sharia, many prominent Republicans seem unaware of—or unconcerned with—the very values and principles this country is supposed to represent.

Unfortunately, one would be just as hard-pressed to find a politician on the left who has spoken with consistent moral clarity and intelligence about this problem. What we see instead from the Obama administration and Hillary Clinton’s presidential election campaign is the belief that a carefully calibrated strategy of political correctness, cultural relativism and moral cowardice can protect us from militant Islamists. And in the absence of honesty about the nature of the problem, it is easy to see why average citizens would be confused and turn to demagogues for answers and leadership.

Unfortunately, contradictions, confusion and cop-outs in dealing with this problem have been confronting American society for decades. While the Supreme Court tells us that burning the American flag is a legitimate act of protest guaranteed by the constitution, the Chairman of the Joint Chiefs of Staff will lobby some small-time Florida pastor to withdraw his support for an inane video. Whereas Americans have been told that putting a crucifix in a jar of urine is a “work of artistic expression” with a legitimate place in a museum, Secretary of State John Kerry can claim that because of some cartoons, the terrorists who attacked the Charlie Hebdo offices had “a rationale that you could attach yourself to somehow and say, okay, they’re really angry.” In May 2013, then-Secretary of State Hillary Clinton stood before the caskets of four dead Americans and decried the fact that an “awful internet video” had caused “rage and violence against American embassies.” Yet on other occasions Clinton has been much more supportive of artistic freedom; for instance, after posing for pictures with the Russian punk rock group Pussy Riot Clinton tweeted that she was “proud to meet strong [and] brave young women.” It should be noted that Pussy Riot became famous for standing before the altar of a cathedral and singing “Shit, shit, the Lord’s shit!”

President Obama, for his part, continues to argue that the view that there is any connection between groups such as Al Qaeda and ISIS and Islam “is a falsehood that embraces the terrorist narrative.” In line with this view, it is becoming standard governmental practice to avoid any public acknowledgement of the nature of the threat we are facing. In November 2009, when Nidal Hasan, a man who had been in direct communication with Al Qaeda recruiter Anwar al-Awlaki, killed thirteen people and wounded dozens more in Fort Hood, TX, his actions were reduced to “workplace violence.” In July 2015, when a man who had a history of declaring his intent to become a “martyr” and who had downloaded videos by al-Awlaki killed four marines and a Navy sailor in Chattanooga, an FBI official described the attack as the work of a “homegrown violent extremist.” When Omar Mateen killed forty-nine people at a nightclub in Orlando, the official FBI transcripts of his calls deleted mention of the fact that he had had pledged allegiance to the Islamic State and Abu Bakr al-Baghdadi. And perhaps most depressing of all, after almost three thousand people were killed in the World Trade Center attacks, the 9/11 Commission decided to redact twenty-eight pages of evidence for fear of upsetting the Saudis.

Unfortunately, the president’s belief that it is a “falsehood” to claim any connection between ISIS and Al Qaeda and Islam is problematic on several counts. Theologically, as Graeme Wood notes in his extensive analysis of ISIS, “The reality is that the Islamic State is Islamic. Very Islamic.” And numerous Islamic authorities concur. Indeed, in December 2014, Islam’s most prestigious institute of higher learning, Al Azhar University in Cairo, gave ISIS a backhanded compliment when it admitted that while they may be terrorists, they are not heretics. Similarly, in comparing ISIS with Saudi Arabia, the former imam of the Grand Mosque in Mecca, Sheikh Adel Al Kilbani said, “We follow the same thought, but apply it in a refined way.” Note that the more “refined” Saudi Arabia is no slouch when it comes to public beheadings, chopping off limbs and denying civil rights and liberties to women.

A second problem with the president’s views is that it elides the fact that so much of the terrorism being perpetrated around the world is clearly driven by what at the very least has to be called an extreme and violent interpretation of Islam. The people killing Christian families gathering in an amusement park in Lahore on Easter Sunday; massacring concertgoers in Paris; turning drugged children into suicide-bombers in Nigeria; kidnapping and murdering Canadian citizens in the Philippines; killing tourists on a beach in Tunisia; murdering shoppers in a mall in Nairobi; throwing alleged homosexuals off of tall buildings in Nineveh; launching poison gas attacks on girls going to school in Afghanistan; destroying skyscrapers in Manhattan; bombing spectators at a marathon in Boston; and attacking a nightclub in Orlando, all have one thing in common and it is something much more specific than a predilection for “violent extremism.” To be confronted with such a transcontinental, multinational, cross-cultural phenomenon drawing adherents from a range of generations and economic classes—and to deny its single common denominator—is both absurd and obtuse.

But perhaps the biggest problem with the president’s argument is that although it is well-meaning, it betrays the hundreds of millions of Muslims who oppose the repressive and retrograde status quo imposed by religious hardliners on the Islamic world. It also leaves them at the mercy of people such as Maulana Sheerani, the chairman of Pakistan’s Council of Islamic Ideology, who recently claimed that husbands had the right to “beat their wives lightly,” for, according to Sheerani, “this is according to the Quran, you cannot ask someone to reconsider the Quran.” (This is not the only questionable position Pakistan’s Council of Islamic Ideology has taken; for instance, it recently pressured the Pakistani government to withdraw a bill prohibiting child marriage. As the Washington Post described it, “Clerics on the council object to minimum age requirements, arguing instead that an individual can marry once reaching puberty, which can be as early as the age of nine.”) Or, in the aftermath of the Charlie Hebdo attacks, consider the views of the Bosnian cleric Safet Kuduzović, who has argued, “He who curses the Prophet is killed . . . if he curses and insults the Prophet he should be killed.” For hundreds of millions of people around the world who long to see a more liberal, tolerant and modern version of their faith emerge, to claim that ISIS, Al Qaeda and similar extremist movements and structures have nothing to do with Islam simply plays into the views of a conservative religious establishment intent on maintaining a medieval status quo.

Confronted with the most recent wave of Islamist terrorism, Hillary Clinton claims that “it matters what we do more than what we say.” Yet if we accept the premises that sloppy definitions lead to sloppy thinking and that thought precedes action, then the words we use very much influence our thinking and ultimately, the tactics and strategies we adopt to deal with the problem. If we think we are fighting a phenomenon as amorphous and open-ended as “violent extremism,” then we will waste our time and resources either trying to kill our way out of the problem with the occasional drone strike or patting down seventy-five-year-old Aunt Betty at the airport security line.

But when tens of thousands of people are killed because Osama bin Laden declares war on the United States, or because the Ayotollah Khameini shouts “Death to America!”, or because “our so-called Saudi allies” (to use President Obama’s phrase) are spending billions of dollars around the world on mosques and madrasas that promote a violent and intolerant ideology, the “leaders of the free world” owe it to their citizens to be honest about the nature of the threat we are confronting, because it isn’t going away anytime soon. As Al Qaeda’s intellectual father, Sayyid Qutb argued “there can be no permanent peaceful coexistence between a community implementing God’s law and other communities.” Or, as Qutb’s Bosnian intellectual heir Alija Izetbegović put it, “there is no peace or coexistence between the Islamic faith and non-Islamic social and political institutions.”