How to Live in a Multipolar World 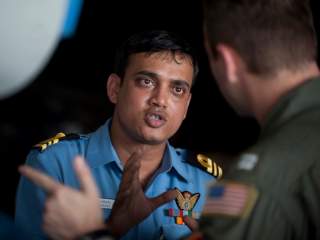 Many analysts believe that the international system is sliding towards multipolarity, a world in which no single great power is in a position to dominate its peers. But among those who subscribe to this view, there is some debate over just how the coming multipolar order will operate. Will great powers work together to uphold order? Will they instead descend into military and economic competition with one another? Or can planet Earth support multiple world orders, co-existent yet separate, each under the sway of a particular great power?

There are no iron-clad answers to these questions. Yet current geopolitics does, perhaps, allow for a glimpse into the future. In particular, the international politics of the Indian Ocean can be considered something of a microcosm of multipolarity in the twenty-first century. For this region—what Robert Kaplan calls “center stage” in the contest for the next world order—is critical to both world trade and global security, and so how the great powers conduct their affairs here promises to say some important things about how they will organize their relations more generally.

Up until the mid-twentieth century, the Indian Ocean was the practical preserve of the British Empire. Almost all of the major cities and strategic ports along the ocean’s littoral were under British rule or influence: Durban, Zanzibar and Mombasa along the east coast of Africa; Aden and Muscat on the Arabian Peninsula; Bombay and Calcutta on either side of the Indian subcontinent; Perth in Western Australia. The Royal Navy controlled access to the Indian Ocean from Suez, Singapore and Cape Town, and the Union Flag flew over most of the ocean’s major islands: Ceylon (Sri Lanka), Mauritius, the Chagos, Seychelles, Maldives, Andaman and Nicobar.

After World War II, one hegemonic power was exchanged for another as the United States slowly but surely became dominant in the Indian Ocean. To be sure, the British withdrawal from the region was piecemeal; decolonization—and especially the independence of India in 1947—removed much of the strategic rationale for Britain’s presence in the Indian Ocean, but the nation was slow to draw down its commitments. It was only in the late 1960s that Prime Minister Harold Wilson announced that Britain would withdraw “East of Aden,” thus beginning the terminal decline of Britain’s bases in South Asia and the Persian Gulf.

Either way, the United States had firmly replaced Britain as the region’s preeminent power by the mid-1970s. The western half of the Indian Ocean, in particular, became enclosed by a string of U.S. bases such as those in Bahrain, the Horn of Africa and the British-controlled island of Diego Garcia, while the ocean’s eastern expanses were drawn into Pax Americana by virtue of Washington’s defensive ties with Singapore, Australia, Thailand and its Pacific bases in Guam and the Philippines.  Despite close relations (at times) with littoral states such as Ethiopia and Somalia, the Soviet Union never came close to rivalling this massive geostrategic footprint.

Today, centuries of relative unipolarity are giving way to noticeable multipolarity. India’s announcement of a base in the Seychelles is another important step in this direction—a sign that New Delhi is doubling down on its blue water navy and attendant power-projection capabilities.  From the Seychellois island of Assumption, which is already equipped with an airstrip, the Indian military—even if it is limited by geography to maintaining only a tiny military presence—will boast a central position in the Western Indian Ocean, close to the East African coastline and astride the important maritime trade route that runs from the Mozambique Channel to the Arabian Sea.

It is not just India that is beefing up its presence in the region, of course. Late last year, China announced the creation of its first permanent overseas base in Djibouti at the mouth of the Red Sea, and Beijing continues to expand its naval capabilities (most recently by announcing the construction of its first Chinese-made aircraft carrier). With the United States also present in Djibouti—as well as Bahrain, Diego Garcia and elsewhere—this means that at least three of the great powers are demonstrably seeking to expand their military reach in the Indian Ocean.  And middle powers such as Britain and France also boast considerable military assets in the wider region.

Of course, the U.S. navy is still far superior to its potential competitors and America’s overseas basing system continues to be unsurpassed. Moreover, no other power can compete the number and quality of Washington’s military alliances in the Indian Ocean or elsewhere. But with the United States, China and India all boasting overseas nascent basing structures in the ocean—and with America’s rivals looking to improve their own portfolios of alliances and client states—the outline of a coming multipolar world is clear to see. What will be the result?

International Relations theory helps to delineate three scenarios that might play out. First, the great powers could cooperate to combat piracy, maintain geopolitical stability, and keep sea lanes open. This is the hope of liberal academicians, who see few conflicts of interest between the various powers in terms of their vision for the ocean’s future; on the contrary, a common stake in policing the commons should provide great impetus to maintaining regional stability. Second, however, the Indian Ocean could become the focus of great power competition and even outright conflict, as distrust and divergent interests push states to shun collaboration. This is the pessimistic prediction of most realist scholars.

But third, the Indian Ocean could become the scene of a new sort of world order—or, to put it more accurately, world orders—as rival great powers go about organizing their own spheres of influence that exist discretely and distinctly with one another’s. Such a world was outlined by Charles Kupchan in his book, No One’s World, in which the author argued that the coming international system will be characterized by decentralization, pluralism, and co-existence.

Which of these outcomes is most likely to obtain?  Last year, one Indian official called for the resurrection of an idea from the 1970s that the Indian Ocean should be transformed into a “zone of peace,” lending rhetorical support for the first (or perhaps the third) of the scenarios outlined above. And to be sure, there has been some evidence of international cooperation in response to piracy off the Horn of Africa.  But facts on the ground seem to point in the direction of more, not less, militarization—including as a result of India’s actions—with the potential for competition and thus conflict thus mounting.

In the final analysis, the future of the Indian Ocean seems bound to be fraught because the stakes are so high.  Around 2.5 billion people live in the ocean’s littoral states, making it an important economic hub.  And with so much of the world’s commercial traffic passing through the ocean, influence over its sea lanes and choke points—the Strait of Hormuz, Gulf of Aden, Suez Canal and Strait of Malacca—is an important geostrategic aim for maritime nations.  Moreover, freedom of manoeuvre in the Indian Ocean is imperative for states that aspire to the military capacity to intervene in geopolitical hotspots such as the Persian Gulf and even the South China Sea.

Whatever the form of international governance that emerges in the Indian Ocean, then, it will have to accommodate the reality that several great powers have vital interests in the region.  Come conflict or cooperation, political order in the Indian Ocean will have to be multipolar in character—if, indeed, it is not already. The prospects for peace and harmonious cooperation under such circumstances are not altogether bleak, but they are not endlessly auspicious either.  In many ways, twenty-first century geopolitics begins here.