How Long Can Turkey and America Keep up Their Alliance? 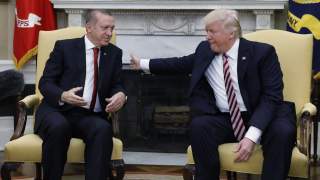 Long simmering tensions between the United States and Turkey exploded into a full diplomatic crisis a week ago Sunday after the U.S. Embassy in Ankara suspended all nonimmigrant visa services at its diplomatic facilities in Turkey. The immediate trigger was the arrest of a consulate employee in Istanbul over his alleged links to Fethullah Gülen. In an immediate tit-for-tat reaction, Turkey suspended its own visa services in the United States, effectively shutting off travel to all tourists or citizens without a pre-existing visa. Despite extreme differences all political groups in Turkey lauded their government’s quick response, showing rare unity across an increasingly polarized landscape. A week later the suspension of visas remains as cooler heads attempt to prevail. Unfortunately this latest formal diplomatic split, which is a first between these two historically close NATO allies, means that every day the issue remains unresolved does further damage to bilateral relations.

The sudden row set off by announcements over Twitter last week were not officially communicated beforehand, souring recent high-level relations cultivated between Presidents Recep Tayyip Erdoğan and Donald Trump. Turkey and the United States had been focusing on their common operational interests while trying to sweep their proverbial divergences under the rug. But it seems this rug is only so big, and the two-way suspension of visa services seems to be the most visible culmination of many long-held, multifaceted disagreements. In the short-term, this is a painful reminder of the limits to the personal friendship between Trump and Erdogan and in the long-term a potent warning of what might be ahead for a rapidly shifting alliance in new geopolitical territory.

Trump set a positive tone for his policy towards Turkey despite increasing skepticism towards Ankara from Washington. Last month the president ended his meeting with Erdogan in New York by saying, “we have a great friendship as countries. I think we're, right now, as close as we have ever been.” Erdogan followed suit by referring to his “Dear friend Donald” and treating Trump differently than he treated Obama, avoiding personal accusations in spite of a series of challenges including the current visa crisis.

Yet the warm regard that Erdogan’s supporters once had for Trump has begun to wane, and many in his camp feel deceived by earlier overtures that they now see as empty rhetoric, particularly as once clear allies such as Gen. Michael Flynn have left the administration. Erdogan has penned the blame for the visa crisis on outgoing U.S. ambassador to Turkey John Bass, a convenient scapegoat given that he is on his way to being the next U.S. ambassador to Afghanistan. By avoiding mention of Trump’s name, Erdogan demonstrated he did not want to harm his positive personal chemistry with the new U.S. president. Instead a choir close to the Turkish government have accused the American bureaucracy of being anti-Turkey and part of the “deep state” who they have accused of being part or at the least sympathetic to Gulen and his network. While an effort to avoid direct confrontation with Trump is understandable given his reputation for being a severe counterpuncher, the visa crisis has gone far beyond a simple diplomatic misunderstanding or technical consular issue and demonstrates the need for a broader recalibration of bilateral relations.

Ever since Trump’s elections, Erdogan and his administration have been overly optimistic about their relations with the United States despite disagreements over key issues, such as the role of Kurdish factions in Syria and Iraq. The Justice and Development Party (AK Party) led by Erdogan saw President Trump’s election as an opportunity to restart relations after their disappointment with Obama. Both governments reinforce a strong commitment to fighting ISIS in the region, but have not been able to see eye-to-eye on Gulen or his network, which is a terrorist organization according to Ankara and Washington has been ambiguous about. This latest diplomatic stand-off could determine whether Erdogan’s initial optimism towards the Trump administration will persevere or turn bitterly sour after a perceived honeymoon.

The issues that led to the suspension of visa services are broader in scope and more complicated than just two men. Commentators in Turkey advocate closing the U.S. Incirlik Air Base in retaliation for U.S. action. Critics of this idea point out that closing the air base would not actually impede U.S. strategic interests all that much, as the United States could find space in another country like Germany. As of late, cooperation at Incirlik remains untouched by the diplomatic chasm. Pentagon spokesman Col. Robert Manning told reporters that “the Turkish air force base in Incirlik continues to fulfill an important role supporting NATO and coalition efforts.” He stressed the close cooperation and commitment of Turkey as a NATO ally and reiterated that United States will continue to coordinate military activities with Ankara.

From the U.S. perspective, Washington’s foreign policy machine is experiencing an entirely new modus operandi under the Trump administration. It seems to many, including in Ankara, that the Pentagon, rather than the State Department, holds more significant sway in foreign policy decisions which further complicates an already difficult relationship with complex interagency battles. Turkey’s military has been neutered and brought under civilian rule just as the State Department continues to lack political leadership given the number of appointments still vacant and mixed messages being sent about Turkey even in the latest crisis.

Ankara is used to receiving mixed messages and different approaches from Washington as administrations change. As the new Trump administration finds its footing, it is still unclear how the State Department will interact with Trump’s White House, and who will have the most say in U.S. relations towards Turkey and governments around the world. Ultimately Erdogan looks to Trump as the penultimate Turkey manager unless another high-level leader is designated further frustrating the U.S. foreign policy establishment.

The decision to scale back visa services has been described officially a coordinated, unilateral one between the State Department, the White House and the National Security Council (NSC). These important actors may have all agreed on their general disapproval over recent actions from Turkey, but seemed to disagree on the price they were willing to pay for further escalation.

Hurting Your Average John and Mehmet

A decision to suspend visa issuances, resulting from complex, government-to-government issues, has very real implications average citizens in Turkey and the United States who have been the primarily victims in the latest crisis. A suspension of nonimmigrant visa services takes away opportunities for Turkish and American nationals to interact and form cultural, economic, and academic ties that have sustained the two countries for so long and are consistently pointed to as the future of the relationship between the geostrategic government-to-government ties. Many beneficiaries of cross-cultural exchanges and people-to-people ties between Turkey and the United States agree that continued partnership is indispensable. The diverse actors that constitute the U.S.-Turkey relationship—which has previously been called a “strategic partnership” or “model partnership”—are now paying the price for governmental frictions and escalations.

The political row may also compound a pattern of anti-Americanism in Turkey. According to Pew research center, just 13 percent of Turks have a positive perception of U.S. ideas, and 72 percent of Turks feel threatened by U.S. power and influence. Following the coup attempt in Turkey, these numbers reached an all-time high that may only get worse. Turks remain skeptical about U.S. involvement in the coup attempt, especially given Washington’s continued refusal to accept Turkish government requests for Gulen’s extradition. Ankara blames Gulen for orchestrating the coup attempt. Given this widespread suspicion, coupled with the recent suspension of visa services, America’s reputation on streets of Turkey has never been more in jeopardy. Though Turkey was absent from Trump’s travel ban list of Muslim majority countries, recent debacles like the D.C. bodyguard crisis, means that Turkey’s image in Washington is equally in jeopardy.

Turkey and the United States are used to highs and lows in their unique alliance, and while at times tenuous and even confrontational, it is a resilient one. This is not the first crisis nor will it be the last, especially amidst an unstable changing world order, continued catastrophe in Syria and complex dynamics in the region. This new tear in the diplomatic rug exposes the issues that the United States and Turkey have been sweeping under it for some time. While one government may pull the rug out from the other’s feet occasionally, mutual interests and common strategic visions may just be enough to patch things back up for the time being. A broader realignment and reassessment will be necessary to address the root cause of the current diplomatic standoff.

Joshua W. Walker, PhD (@drjwalk) is Senior Vice President at APCO Worldwide, a Transatlantic Fellow at the German Marshall Fund of the United States and formerly worked on Turkey for the US State Department.

Selma Bardakci (@selmabardakci) is an Atlas Corps Fellow from Turkey.