How Macron Could Destroy the European Union 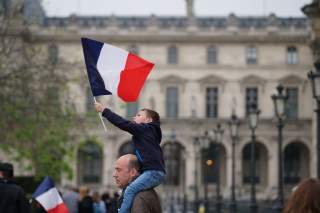 Emmanuel Macron is calling for concentrating more power in the hands of “Brussels,” that is, in the hands of the European Commission. This is despite the fact that Britain is leaving the European Union because of popular rebellion against violations of national sovereignty by Brussels. One cannot have ever more economic and administrative integration on the EU level as long as the primary loyalty of most EU citizens is to their nation and not to the European Union. The line—millions are willing to die for their country, but no one is willing to die of the EU—says it all.

I am not denying that it would be better if Poles and the French, Greeks, Finns and Hungarians would all wake up tomorrow and see each other as brothers and sisters, or at least as dedicated citizens of a United States of Europe. However, this is not happening. On the contrary, EU overreach is alienating more and more Europeans. The EU did well when it stuck to opening borders to trade, a move that benefited all (albeit not equally). It was well tolerated when it arranged for numerous low-key forms of administrative coordination among the nations, for student and scholar exchanges, and set minimum standards all industries and commerce had to adhere to. However, once it introduced a shared currency, affected the budgets of its member nations, opened the borders to the free movement of labor, and pushed for the absorption of a large number of immigrants—it intruded on national identities and the particular values of the various member nations.

As a result, the EU is now trying to stand between two steps. It seeks an ever-higher level of economic and administrative integration. Macron calls for introducing a banking union and for an integrated budget to be formulated by the EU, which all member nations will be required to follow domestically. An EU finance minister will oversee the budget. At the same time the EU is maintaining a low level of political integration, while a higher level is needed if people are to be willing to make the kind of sacrifices for each other and changes in their national policies a much thicker unified EU policy requires. In other words, true community building is severely lagging behind economic and administrative integration. The EU now must either move up—by integrating more politically—or scale back its economic and administrative integration. Regrettably, there are many indications that it will be forced to scale back rather than move up. Nations are restoring border controls, ignoring instructions from Brussels, and public-opinion polls show that increasing majorities are seeking less integration, not more. (They love Europe, but not the EU.) In this situation, to call for more economic integration reflects the kind of thinking a banker, which Macron is, would indulge in, one who missed his Sociology 101 class.

So let’s celebrate Macron for saving France from Le Pen and, if you wish, admire his marriage to his sixty-four-year-old wife. For all I care, he may even be able to walk on water, as one of his campaign ads implied. But do not call him a savior of the EU. He is pushing it to the brink—to which it is already dangerously close.

Amitai Etzioni is a University Professor and Professor of International Relations at The George Washington University. For additional discussion of the EU, see his 2016 book Foreign Policy: Thinking Outside the Box.