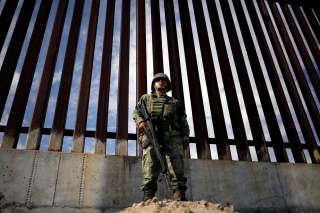 Amid all of the contradictory messages and policy reversals, President Donald Trump seems hell-bent on at least two goals: punishing China to enhance his bargaining position in trade negotiations and maintain America’s economic dominance and stopping immigration to boost his reelection prospects and strengthen the United States. But severely cutting immigration actually reduces America’s ability to preserve its relative economic and military power vis-à-vis China by dulling its demographic edge.

Research indicates that a country’s demographics greatly affects its security, and that its population is an indispensable part of its power. People drive the economy and economic growth fortifies military muscle. Without enough workers or troops, there are insufficient resources to support the young and the old, and to defend the country against external threats. A shrinking workforce can therefore cripple a country’s ability to compete against its enemies and project power abroad.

While the United States remains the most powerful country in the world, China is widely considered to be its strongest competitor. The sheer size of China’s population and economy raises fears that the United States is losing its unrivaled position in global affairs. Conventional wisdom holds that China is poised to overtake the United States in the not-so-distant future.

But China is getting old fast. The Communist regime made a strategic mistake when it introduced the one-child policy in 1979, contributing to its aging population today. Although China eventually recognized the blunder and finally ended the policy in recent years, the damage is already done.

China’s working-age population is dwindling, and hundreds of millions more people will be over the age of sixty by the middle of the century, drastically constraining its economic and military potential. Chinese workers will increasingly struggle to support its elderly population. In short, China’s aging population will hobble its future power.

The United States is better positioned than China and other potential geopolitical rivals. America’s history of immigration has helped it to postpone the effects of an aging population. Whereas Japan and several European countries have been wrestling with greying populations for years and struggling to retain their global influence, the United States has continued to thrive with a relatively young population.

Immigrants play an outsize role in the U.S. economy, fueling its growth and enhancing its dynamism. Around four in ten founders of Fortune 500 companies are immigrants or children of immigrants. One in four American Nobel-prize winners since 2000 are immigrants, and this ratio goes up when looking only at the winners in chemistry, medicine and physics. Immigrants are also around three times more likely to file patents for inventions than people born in the United States.

To be sure, America’s population is also greying as birth rates are declining. Population growth has not been this low since the Great Depression in the 1930s, and local populations are even falling in some states and cities. The proportion of elderly people is rising, while fertility rates are at record lows. Immigrants, however, tend to have higher fertility rates.

Continued immigration can help maintain a better demographic balance and propel future economic growth. Without immigration, the working-age population will stagnate or even shrink in the coming years. It will become harder and harder to pay for social security and Medicare as the elderly population increases in comparison. Forecasts for U.S. economic growth are down precisely because of the slow growth in the working-age population.

If the United States decides to significantly reduce immigration, America’s global power is probably destined to decline. Its demographic advantages over its rivals may be lost. Immigration strengthens the United States, and admitting new migrants is essential if the country wants to remain a superpower.

This all means that any talk of drastically cutting immigration is shortsighted and imprudent. But stubbornly refusing to recognize that the status quo is unsustainable is also foolish. A failure to fix the current immigration system will doom the United States.

Trump is tapping into—and inciting—real anger and frustrations about migration. Shifting demographics are creating a strong backlash that will be impossible to contain by ignoring voters’ complaints. Trump’s opponents need to get serious about reducing illegal immigration. Without a credible plan, nationalist and nativist candidates will continue to win elections. Their success will fan the flames of hostility and harden divisions between identities, eroding U.S. power from within. A divided United States is also weaker on the international stage.

An improved immigration system would curb illegal immigration, significantly speed up the asylum-seeking process, welcome immigrants from all around the world (not just from non-Muslim countries), create a path for so-called Dreamers to gain citizenship, and increase the number of refugees admitted every year.

If the United States decides that it is “full” and manages to somehow block the arrival of new migrants, then its economic strength will slowly crumble as the working-age population becomes overburdened with paying for older generations. America’s relative power will lag behind its rivals, and China could gain global influence at America’s expense.

Cutting immigration is like giving away your number-one draft pick for nothing if you were running a sports team. It wastes one of America’s greatest assets in its long-term competition for power and influence against China. It’s counterproductive.

Put simply, without immigrants U.S. global power will likely fall. But a failure to reform the immigration system will virtually guarantee the electoral success of xenophobes in years to come. Developing a sustainable immigration policy is therefore essential for maintaining America’s lead over China.

David Kampf is a senior PhD fellow at the Center for Strategic Studies at The Fletcher School.