How to Make Russia Great Again 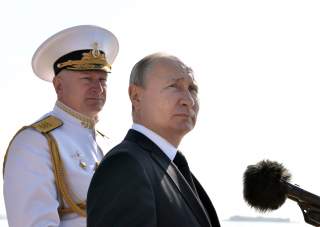 In 2012 Russian president Vladimir Putin was confronted by mass protests in Moscow and was able to more or less legitimately win the presidential elections and move his protégé and predecessor Dmitri Medvedev to the chair of prime minister. Today, as a fresh round of protests takes place over upcoming Moscow municipal elections, however, Russia is experiencing a more profound and protracted crisis. It is time for Russia to reinvent itself as a patriotic nation through local self-governance.

Until now, Putin’s regime has been supported in elections, not just by a dark unenlightened majority eager to swear its allegiance to any “iron fist” that has guaranteed a minimum of living standards. Rather, Putin’s regime has also been supported by enlightened conservative voters who recognized the value of state sovereignty and national greatness but didn’t want to see their country as a patrimonial dictatorship in the Central Asian-style. This conservative voter was ready to back Putin in future elections provided that the president they voted for is following the evolutionary road to a modern society with a fair court and free parliament. This type of voter reconciled himself with the elements of authoritarianism in Russia for the sake of national revival, while viewing such developments as merely a temporal phenomenon prompted by real national interests rather than by self-serving desires of elite circles.

But let’s face it: this voter was not represented by any political party in Russia. Fundamentally, all the mainstream parties pursued the various interests of the bureaucracy. And the nonconformist liberal opposition was clearly far from sharing the political views of conservatives. But it is hardly immune to a reactionary way of thinking. Quite the contrary. In the sphere of radical Left opposition groups, there are, in fact, many admirers of autocracy or Stalin regime. Leaders such as Lenin or Stalin often held up the ideal of democracy, but they did it without any sincere attachment to the institutions of law and representation. This somewhat depressing background helps to explain why voters who share the conservative perspective that I mentioned looked with some hope at the Sebastopol Legislative Assembly, whose leaders are contemporary-minded patriots that are loyal to Putin. Some of those assembly members are under Western sanctions for their participations in the events of Russian Spring in Crimea. We believe that here, in the legendary city of Russian fleet, the union of Russia idea and Russia freedom is emerging, and that this union could shape the image of Russian civilization in this century.

What do I mean by this? “Progressive localism,” as the prominent American political scholar Michael Lind called the phenomenon, is on the rise in contemporary Russia and this fact hardly seems peculiar in the context of the contemporary “network society.” Ten years ago, I personally didn’t know—and didn’t have a chance to realize—that some lanterns near my house were built in the 1940s and that they were of considerable historical value. Some years ago, I learned this information from a local history expert’s blog, which I found on the web. In the past, I had no real motive to struggle to preserve this relic. But today, with the assistance of Facebook, I had the opportunity to find friends in my neighborhood who could share my desire to keep the lanterns in place as a sign of our common history.

A lot of young, brave and non-conformist members of this social class require some form of public activity for self-fulfillment. After 2017, we witnessed the rise of a new phenomenon in our city—local activism. Nearly every Moscow city district could detect the emergence of groups of people who tried to protect local parks and squares, historical buildings, kindergartens and hospitals from elimination as a result of chaotic redevelopment.

Today, in 2019, the system seems to demonstrate its limited modernizing potential. From elite interests to the interests of redevelopment business lobbies, the Russian system appears unable to take a step toward limited democratization and broaden the sphere of local self-governance. And even the arguments of semi-royalist style and the “No Putin, no Russia” motto don’t work here for the same reason. Even in Moscow, the opposition doesn’t oppose Putin directly. But in Sebastopol, they find no anti-Putin forces. Instead, there are sincere and loyal people who don’t want to give up the city self-government that might be possible if the majority of the Legislative Assembly was formed by the party “United Russia.”

And this slowdown of modernization on all fronts—in Moscow, in Sebastopol, on the federal level—leads to the disappointment of citizens in the power, to the fall of president’s approval numbers and to the conflict between different segments of the elite. For example, we see that the propositions by the head of the State Duma Vyacheslav Volodin to extend the rights of the representative body in the cabinet building do not have the administration’s approval. Additionally, as it so often occurs in the midst of a heated conflict, both sides started to seek the symbolic support of pro-Western groups. This strife may result in the paralysis of governance and a fresh collapse of our state.

Surely, democracy in Russia cannot be freed from all restrictions. But we should not confuse the acute restrictions created by the current laws and a demonstrative violation of law that clearly testifies that the system cannot play by its own rules. This never leads to anything positive. But Putin’s system has only one positive outcome—to allow the new patriotic and conservative opposition to play on the field of public politics. And that opposition can destroy the monopoly of pro-Western forces on the protest and attract all the groups that struggle for local self-governance under the conservative-democratic program. It would not create a challenge to the principles of Putin foreign politics. Instead, it would insist on s slow but constant move toward political democratization.

Many Muscovites could ask themselves the question: if the Legislative Assembly in Sebastopol is proving quite effective, then why we cannot repeat its experience in Moscow where we have much more problems? Surely, the local representative body cannot solve the region’s economic problems without assistance. Still, it is capable of becoming a firm defender of nature zones and historical artifacts in local communities.

The notion that this “progressive localism” would stay on a district level and not become a political problem on a national scale, and that the municipal deputies who have gained prominence thanks to a wave of nostalgia wouldn’t get an inclination to become political leaders of the broad democratic movement in the city, is laughable. That is just what is happening.

If such a conservative democratic doctrine won in the beginning of the past century, then Russia would have passed through the initial phase of the capitalist modernization without falling prey to communist totalitarianism. If it could win at the end of the same century, then Russia wouldn’t have been plunged into political and economic chaos. Right now, we have a chance to successfully navigate our way through this crisis, but in order to do that the Putin administration has to change its attitude toward regional self-governance. It has to hold up the Sebastopol Legislative Assembly as an example for other institutions rather than treat it like an anomaly or disease that requires remedy or a surgical operation.

Boris Mezhuev is editor of Russian Idea and an assistant professor at Moscow State University.