How to Make Sure a U.S.–North Korea Summit Will Be Worthwhile 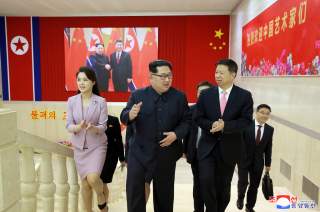 Let’s restrain our enthusiasm. As Bruce Klingner of the Heritage Foundation has put it, “We’ve been down this road before and it ends at a cliff.” The lure of “peace in our time” is strong, as is the belief that a productive “relationship” with a brutal autocratic leader unchallenged in his own domain is possible in the absence of viable policy and strategy. Japan and the Republic of Korea fear abandonment. Others in Asia worry about becoming collateral damage in some grand bargain. Beijing, Moscow and Tehran—conspirators all with North Korea—likely see opportunity.

Mike Pompeo is the first cabinet official to meet with a North Korean leader since Madeline Albright at the end of the Clinton administration. That earlier meeting didn’t produce much except embarrassment. We looked like the supplicant. We sent a high official to Pyongyang, but North Korea did not reciprocate, despite the presence of North Korean officials at the UN—the famous “New York Channel.” The imbalance here is not a good start to the negotiations.

President Bill Clinton visited at the dawn of the Obama administration. North Korea proposed a deal to release two foolish journalists who thought it would be fun to cross the Yalu. A Pyongyang visit by Clinton, and the legitimacy that conveyed, was the ransom. The journalists were released, in healthy condition. Otto Warmbier was not so fortunate. Another three Americans held there await their fate. No productive “relationship” with Kim was on offer then, despite lavish diplomatic receptions and activities.

The leaked disclosure of Pompeo’s visit is a worry. Once again, we cannot keep a secret. What was the motivation for the disclosure? Was this sloppy statesmanship, or is this part of some grand plan in pursuit of low political interests? Were our allies, particularly the Republic of Korea, informed? Or is this just pursuit of headlines to hype the pending summit?

Despite the disclosure, it’s encouraging that we are preparing for this “ready, fire, aim” summit. We’re offering Kim a meeting with the president of the United States—what should be a real prize—with no assurance that anything will come of this, so at least some groundwork is prudent.

It’s still not at all obvious that something can be accomplished with North Korea. Pyongyang has evaded all past agreements. Kim runs the world’s largest and most oppressive gulag. He deployed and employed a weapon of mass destruction (VX gas) to settle a family feud in a crowded foreign airport. This capability demonstration served notice to all countries hosting large numbers of North Korean workers and criminal enterprises that Kim’s coercion is exportable. These are not accidents; they reveal the character of the regime and of Kim.

What is on offer that will convince Kim that he is better off in any way without his nuclear potential, including his profitable proliferation business? And how do we convince him that we will keep our side of any given bargain? We’ve established recent precedent that we don’t feel necessarily bound by such things as international agreements. Muammar el-Qaddafi’s death in a ditch, while Kim was in school in Europe, reportedly impressed the student on the hazards of giving up nuclear-weapons ambitions.

Speculation emerges about a formal treaty to replace the armistice. Key questions remain about North Korea’s missile program. It takes far less than a ballistic missile to hit South Korea and Japan, so the possibility arises that Kim offers to eliminate his ability to strike the United States, while retaining a massive threat to South Korea and Japan. If the price includes reduction or elimination of the U.S. presence in Korea and Asia, China will support that. That would be a separate peace. It would mean the end of our alliances, and would likely persuade our allies that they should pursue their own nuclear capability.

Kim rapidly expanded the nuclear, chemical, biological and missile programs he inherited from his family dynasty. These deadly capabilities developed over nearly thirty years, while North Korea was under sanctions. This should give us a sense of humility about how effective sanctions really are in a globalized business—and criminal—world. Now that Kim has achieved (or is very close to achieving) global-strike capability, he wants to talk.

As usual when North Korea wants to talk, many good things are alleged to be on offer. Talk and diplomacy are all good. But North Korea and China have profoundly changed the status quo in Asia through Kim’s weapons programs and Xi’s territorial expansion in the South China Sea and elsewhere. Elsewhere, Russia has annexed Crimea, destabilized eastern Ukraine and pressured the Baltic countries with cyberattacks and military demonstrations. Add Iran’s efforts to subjugate the Middle East and we have something that looks like an autocratic spring. Freedom House documents the decline of free, representative governments around the world. Asia is particularly troubling. With that decline comes an increased threat to the liberal-democratic order created after World War II to prevent another repeat of the disasters of the first half of the last century. Our reactions thus far do not impress any of these revisionist leaders. That’s an important part of the background for this summit gambit: our will and our capability are assumed to be in decline.

We need an effective response to reset the situation and restore confidence among our allies. Diplomacy, dialogue, negotiations and such are worthy pursuits, but they must be done from a position of obvious strength and an undoubted ability to prevail. A prompt increase in air and missile defense capabilities in Asia would be a good start, and a much better background for a summit with a brutal despot than a hope for “peace in our time” from clever secret negotiations. South Korea and Japan must see convincing evidence that our defense guarantees are real. China and Russia must understand that if they cannot or will not help to restrain North Korea, then we will reinforce and enhance our alliance defense capabilities, despite their objections. Our vital interests are at stake. We need to act accordingly.

• Enhance and expand the robust financial sanctions introduced in September, to include the application of secondary sanctions against Chinese or other firms assisting North Korea;

• Engage in maritime interdiction operations (MIO) against ships we are already tracking in order to contain inward and potential outward proliferation by North Korea;

• Increase bilateral and regional missile defense cooperation with our allies;

• Reboot our relationship with Seoul by sending an ambassador and avoiding gratuitous trade friction;

• Address shortfalls in ammunition, readiness and joint exercises so that military options are credible should they become necessary;

• Update our counter-provocation strategies with South Korea to ensure prompt and decisive responses to North Korean attempts at coercion;

• Engage in diplomacy with North Korea as one line of effort, but not with the expectation that it will yield decisive results and not at the cost of implementing these other elements of deterrence and containment; and

This summit will be on the world’s biggest stage. Much work remains to properly prepare the theater and the background music.