How to Make the U.S. Military Weak Again 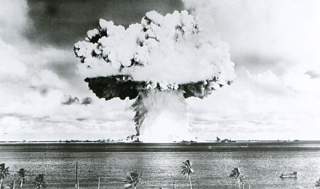 No-first-use, or the idea that the United States should not use nuclear weapons unless first attacked with them, has gained traction everywhere from the House Armed Services Committee to the Democratic presidential debates. Proponents of a no-first-use policy present it as a common-sense solution that would reduce the likelihood of nuclear war and signal U.S. leadership on nuclear proliferation. The reality, however, is that a no-first-use policy would upend decades of bipartisan consensus at precisely the moment when continuity in nuclear policy is needed most. America’s adoption of a no-first-use policy would be bad for the United States, worse for our allies, and terrible for the cause of nuclear nonproliferation in an era of strategic competition with China.

First, a no-first-use policy would weaken our military posture in the face of a wide array of chemical, biological, and cyberattacks. Under the rules of engagement outlined by the no-first-use policy, the United States could suffer a biological attack killing thousands of troops stationed abroad, a chemical attack killing hundreds of thousands of civilians in San Francisco, and a crippling cyberattack on America’s nuclear infrastructure and still be unable to respond with nuclear force. A no-first-use policy would place a needless restriction on the country even when nuclear force would be the best option to deter further aggression.

And far from reducing the probability of nonconventional warfare, America’s adoption of a no-first-use policy would make nonconventional warfare likelier. Adversaries, emboldened by the knowledge that even the most brazen attacks on the United States no longer carry the risk of an American nuclear strike, would feel more confident in testing the upper boundaries of what they could get away with. In short, a no-first-use policy would leave the United States less able to respond to exactly the kind of biological, chemical, and cyber brinksmanship it would invite.

If a no-first-use policy weakens our hand in the face of such attacks, then it outright hobbles us in the event of actual nuclear warfare.  In any scenario with an American no-first-use policy in place, adversaries would understand the first strike is theirs and thus use it as an opportunity to erode our second-strike capabilities, something that could give them a decisive advantage in the conflict ahead. This threat is underscored by Russia’s tactical nuclear advantage over the United States, which they could leverage to destroy nuclear bunkers, siloes, and submarines before we ever have the chance to use them. A no-first-use policy would thus weaken our nuclear posture even in the only situation where nuclear weapons are permitted—after we’ve already been attacked.

A no-first-use policy is likewise bad for our allies, who have long relied on our extended deterrence for their own protection. During the Cold War, for example, the threat of a first-use nuclear strike did much to deter the Soviet Union from rolling into Western Europe, even when they had the superior conventional forces to do so.

The Cold War is over, but the dynamic is much the same. Allies from South Korea to Saudi Arabia depend on America’s right to use nuclear weapons first as a credible deterrent to keep regional rivals like North Korea, China, and Iran in check. This was made explicit in the run-up to the 2010 Nuclear Posture Review, when President Barack Obama flirted with the idea of a no-first-use policy but backed off after hearing firsthand from allies how the policy would leave them more exposed to attack from emboldened regional adversaries.

Indeed, it is conceivable that many of our allies would develop nuclear weapons of their own if they no longer felt covered by America’s nuclear-security umbrella. South Korea, for example, is the world’s fourth largest generator of nuclear energy, and the transition from producing the low-enrichment uranium needed for nuclear energy to the weapon-grade uranium needed for a warhead is not insurmountable. Japan and Taiwan, with latent nuclear capabilities of their own, could also nuclearize if they no longer deem America’s nuclear deterrent strong enough.

And this is the paradox of a no-first-use policy. Its purported goal is a world with fewer nuclear weapons, but its implementation would in fact result in more of them. Some may welcome a nuclear South Korea or Taiwan in an era of strategic competition with China, but the reality is a world more populated with nuclear countries would necessarily increase the chance of nuclear miscalculation—exactly what a no-first-use policy set out to avoid in the first place.

From the Iran Nuclear Deal to the Paris Climate Agreement, the Trump administration has made a point to undo much of what was accomplished during the Obama years. This makes Trump’s 2018 Nuclear Posture Review all the more notable. Not only did the review retain the previous administration’s language on a no-first-use policy, it did so word-for-word. Obama and Trump’s mutual rejection of a no-first-use policy perhaps best underscores the extent to which the policy would weaken the United States, endanger our allies, and lead to nuclear proliferation. We might continue to hear more about this policy in the coming presidential cycle, but we should hesitate before upending a policy that has underscored decades of national and global security—and could continue to do so for decades to come.

Brent Peabody is a researcher at the Center for New American Security. A recent graduate from Georgetown University, he will continue his studies next year as Fulbright Scholar in Brazil, where he will be researching Brazil’s own push to nuclearize during its military dictatorship.