How Many Nuclear Weapons Do India and Pakistan Need? 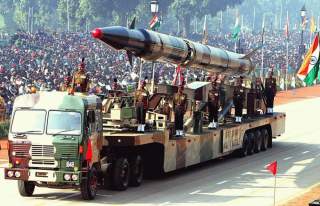 Pakistan’s former Director-General of the Strategic Plans Division, Lt. General Khalid Kidwai’s recent remarks that Pakistan has enough nuclear weapons to ensure that war in South Asia is no longer an option, were carefully measured but caused apprehension. The remarks appeared to suggest that the nuclear deterrence debate in South Asia is settled. Of course, the debate is far from settled.

As nuclear arsenals around the world grow, the “how many nuclear weapons are enough” question continues to trouble policy-makers and strategists. In South Asia, the question is addressed by the local catch-phrase “credible minimum deterrence,” which suggests a small but highly survivable nuclear force. However, that concept is ambiguously-defined and vague enough to permit an expansion of nuclear arsenals able to meet both India and Pakistan’s dynamic security and deterrence requirements. In practice, both countries have interpreted credible minimum deterrence to mean nuclear arsenals sized currently between 90-120 weapons, deliverable by ballistic missiles, bombers, and eventually, nuclear submarines. The size of the arsenal has grown according to the strategic environment, adversary’s size and sophistication of forces. Despite protests that they are not engaged in a nuclear arms race, nuclear forces are growing in both countries.

The complications and ambiguities surrounding the notion of credible minimum deterrence—deliberate or not—confound many in the international community as to where Indian and Pakistani nuclear developments are headed. The discomfort is understandable. The Cold War’s ideational predecessor of minimum deterrence—the doctrine of nuclear sufficiency—ultimately led to enormous nuclear arsenals in both the United States and Soviet Union. A look at the strategic drivers for Indian and Pakistani credible minimum deterrence sheds light on India’s and Pakistan’s calculations as to how many nuclear weapons are enough.

At the strategic level, three factors appear to affect India’s long-term calculus: China’s nuclear capability, the technological ambitions of India’s defense scientists, and the long-standing commitment of political elites to nuclear minimalism. China’s military modernization creates disquiet in New Delhi, though from India’s perspective, the ability to reach major Chinese cities with the Agni missile system goes a long way toward reinforcing nuclear deterrence. As for Pakistan, Indian nuclear policy-makers seem to believe that the threat of “massive retaliation” will adequately “take care” of the nuclear threat from the smaller nuclear neighbor. Indian defense scientists have publicly supported and pursued capabilities like ballistic missile defense (BMD), multiple independently-targeted reentry vehicles (MIRVs), the nuclear triad, and thermonuclear weapons in pursuit of a nuclear résumé comparable with that of the elite club of nuclear weapons states. India’s political leadership has invested political capital in the idea of nuclear minimalism and a departure from this posture—explicit or otherwise—would be problematic, both politically and diplomatically.

Pakistan’s interpretation of minimum deterrence is equally flexible. Pakistani officials define minimum deterrence as India-specific. To put it simply, the strategic calculus is that Pakistan must deter a militarily and economically stronger India. But officials have articulated that Pakistan’s nuclear weapons program is not open-ended. In a similar vein, Pakistan’s short-range, tactical nuclear weapons are said to be a defensive response to India’s offensive Cold Start doctrine. While Pakistan had already moved theoretically from minimum deterrence to “full spectrum deterrence,” the current arsenal size is seen to be sufficient for the next ten to fifteen years.

In a few important respects, Pakistan appears to be emulating U.S. nuclear policy during the Cold War. Pakistani officials have stated explicitly that they consider nuclear deterrence to be an extension of conventional deterrence, and believe their short-range nuclear systems serve as a bulwark against Indian conventional aggression. Furthermore, Pakistan reserves the right to use nuclear weapons first. Pakistan envisions a second strike capability which is pegged to the Indian arsenal—not strictly in terms of numbers, but in terms of balance of forces. This way, the onus of keeping deterrence minimal and the sufficiency low is on India.

Beenish Altaf and Tanvi Kulkarni are Visiting Fellows at the Stimson Center.