How Mattis Can Help Reshape the Navy 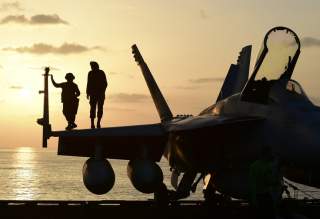 Well, there is a reason he cops to the nickname “Chaos.” Last month Secretary of Defense Jim Mattis set the naval community aflutter by musing, Hamlet-like, about jettisoning the U.S. Navy’s effort to rotate carrier, amphibious, and surface forces from home port to foreign stations on a foreseeable cycle. To be predictable, or not to be? That is the question, quoth Chaos. His Shakespearean reply: nay.

The naval establishment has long striven to keep a regular schedule. Over the decades deployment schemes have gone by such titles as “tactical training cycle,” “Fleet Response Plan,” or, better yet, “Optimized Fleet Response Plan.” Crudely speaking, that means about a third of the fleet is undergoing upkeep on any given day and is unavailable for combat duty. Another third is working up for deployment by executing increasingly demanding training and exercises, or it has come back from deployment and is conducting local maneuvers to maintain proficiency should it need to surge back overseas before putting into a depot for overhaul. Depending on the unit, crews from that third fall somewhere midway between greenhorns and completely battle-worthy mariners. The final third of the force is actually on cruise, backing U.S. foreign policy with steel.

The current plan purports to keep each unit fit for action for half of each thirty-six-month increment of its lifetime. Carrying out maintenance, training, and operations in standard phases gives suppliers, consumers, and targets of naval power—shipyards, naval commanders at home and abroad, allies, and prospective foes—a good idea of what U.S. Navy and Marine Corps forces will be on scene at any time to uphold American purposes. Private shipbuilders in particular prize routine. Managers hate to lay off or hire skilled labor en masse as ships’ schedules ebb and flow. They do not relish stockpiling matériel that may go unused for long stretches of time, or having to scramble for it when an unexpected yard period transpires. Change is disruption for suppliers of naval might.

That’s because there’s more to maritime operations and strategy than efficiency. Firms and navies may as well inhabit different universes. Apart from foul weather or the occasional African corsair, the Maersk Lines of the nautical world confront few disruptions to their standard routine. Efficiency is the watchword for commercial shippers. For managers excess time or cargo spell waste, and smaller profit margins. Monotony is welcome.

But navies are not money-making enterprises. They face competitors in peacetime and enemies in wartime, and their competitors lob missiles at them rather than try to outcompete them through savvy business practices. And contestants like China and Russia thrive on being mercurial. They have every incentive not to abide by American timetables. Indeed, it behooves them to wreck those timetables by springing unforeseen moves, such as concentrating forces of their own to outmatch whatever fraction of the U.S. Navy they know they will face.

Notes Mattis, accordingly, “a rotational schedule that allows me to tell you, three years from now, which aircraft carrier will be where in the world” is ill-suited to a world bristling with great-power challenges. It telegraphs American punches.

For navies, in short, there’s a strategic upside being unpredictable despite the technical and tactical headaches it causes shipwrights, training commands, and other suppliers of naval forces. Arrhythmic operating patterns will help the sea services wrest the initiative from prospective foes, knocking them off-balance to American advantage. Forbearance might prevail in the China seas, the Black Sea, or other embattled expanses if Beijing and Moscow know they might find themselves staring at multiple aircraft-carrier expeditionary groups—think back to last fall’s three-carrier deployment to the Western Pacific—or even a single supersized carrier group resembling the force currently bombarding ISIS from the Mediterranean Sea.

U.S. Air Force Col. John Boyd testified to the benefits of consciously being erratic. In fact, he situated it at the center of his nimble, adaptive approach to international competition and combat. Boyd exhorted tacticians and strategists to take control of their—and their antagonists’—surroundings, thence to unleash “fast transients” to disorient them. Change the world around your foes faster than they can keep up, and you amass a competitive advantage that’s apt to prove insuperable. Bewildering opponents in peacetime could deter misbehavior. Outthinking and outmaneuvering them in wartime dislocates their battle efforts, helping deliver victory.

All of that stipulated, there are hazards to intermittent deployments alongside the upsides. Think about the new challenges Mattis’s scheme will impose on handlers of alliance diplomacy. Allies have grown accustomed to seeing U.S. Navy gray hulls appear in their waters in predictable, reassuring numbers and strength. They see the American naval presence as a token of commitment to their security and other interests. They might fret that irregular deployments presage a withdrawal of that commitment, or otherwise reveal American inconstancy. Ceasing to station a standing presence of foreseeable dimensions in crucial theaters like East Asia could imply that America no longer has skin in the geopolitical game—and thus that Washington means to disengage from alliances and friendships there.

Naval diplomats will have to up their game and explain to allied leaders early and often that the United States remains as resolute as always. Washington must also beware of strategic drift. Mattis’s concept could morph into “offshore balancing,” loosening U.S. alliances. Shorter deployments, that is, could give way to less frequent deployments, and thus to fewer forces on average on foreign stations. Foreign eyes might regard a sporadic presence as an unreliable presence, an undeclared “Come Home, America” strategy.

Naval officials have already taken to prophesying, darkly, that Budget Control Act restrictions are poised to return in a couple of years once the ongoing splurge in defense spending subsides. At that stage unpredictability could make convenient rhetorical shorthand for keeping the fleet home to save operations and maintenance dollars. Allies would become increasingly loath to pin their fortunes on their American protector, and more likely to make whatever arrangements they could with other competitive countries.

Less skin in the game would portend less access to bases on allied soil, which in turn would mean less training time with allied forces on likely battlegrounds, which would mean decaying effectiveness for combined fighting forces, which would mean increasing reluctance on the part of allied governments to confront the red teams of the world—no matter how just their cause.

Arresting such a vicious downward cycle would be hard once events have set it in motion. Defense officialdom must convincingly explain its reasons for undertaking atypical deployment patterns, paying a decent respect to the opinions of friendly societies and their leaders while staring down predators. And the leadership must discipline itself lest tactical and operational patterns blur into a strategy of pullback from the world—a strategy that forfeits larger interests and ideals.

So let’s give Beijing and Moscow fits in our daily operations. But let’s also remain as politically steadfast as ever—and make sure foes and friends know it.

To be predictable, or not to be?

James Holmes is the inaugural holder of the J. C. Wylie Chair of Maritime Strategy at the Naval War College and the author, most recently, of “Visualize Chinese Sea Power,” in the June 2018 issue of the Naval Institute Proceedings. The views voiced here are his alone.